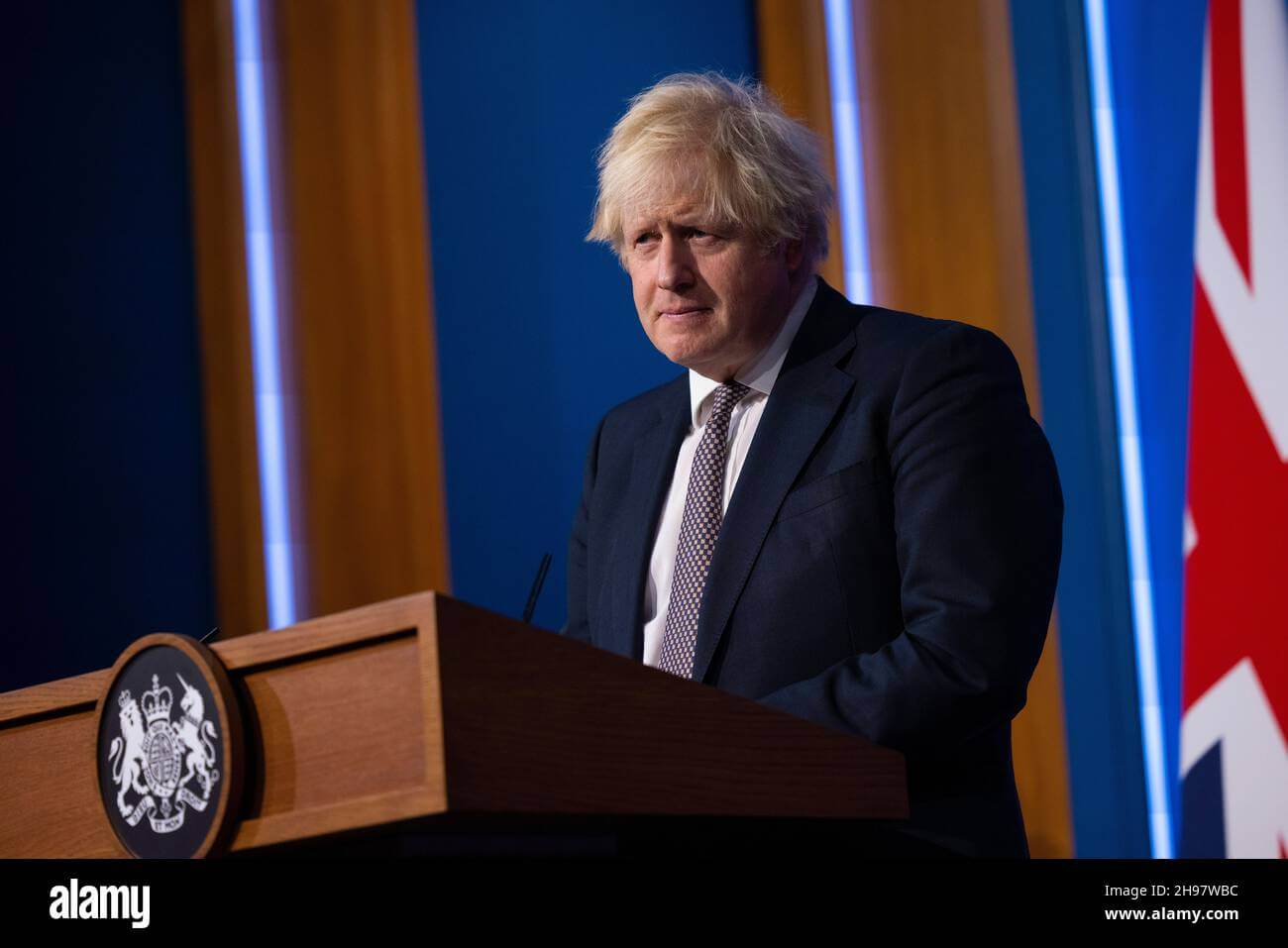 The end for the PM? What could cause Boris Johnson to resign

Much like his erstwhile journalistic endeavours, Boris Johnson’s political career has never been free from controversy and scandal, and his tenure as prime minister is no exception.

However, could the recent eruption of allegations regarding multiple Covid rule breaches during lockdown in No 10 be one step too far for the electorate?

Might his alleged lies over the “wallpapergate” Downing Street flat refurbishment paint him into a corner with parliament?

Where the Matt Hancock affair, and the past controversy with Dominic Cummings appeared to have made only small dents on Boris Johnson’s poll ratings, could the current scandals even go as far as forcing the prime minister from office?

After a week in which ITV News broadcast that now infamous clip of his former press secretary, Allegra Stratton, joking about a Downing Street party, we examine these threats to Johnson’s premiership, and the chances of them making a dent on his position anytime soon.

On Wednesday Scottish Conservative leader Douglas Ross called on the prime minister to resign if he was found to have misled parliament regarding last Christmas’ goings on.

The exact course of events over last year’s alleged parties is not yet clear, but the accusation that Johnson may have lied to Lord Geidt’s investigation is the more immediate threat where an explicit breach of his ministerial code could be found.

On Thursday the Electoral Commission slapped the Conservative Party with a £17,800 fine for failing to adequately declare the donations made toward the refurb.

This came after the Commission obtained damning WhatsApp messages exchanged between Johnson and the donor-cum-Peer Lord Brownlow, implying that Johnson asked the latter to “authorise” refurbishment works at his residence, to which Brownlow explained that he “knew where the funding was coming from.”

In May, Johnson assured Lord Geidt’s investigation that he was first made aware of Conservative Lord Brownlow’s payments to cover the revamp in February this year.

Questions regarding the flat refurb have of course been rumbling on for months, without appearing to cut through to the public. However, this new evidence combined with anger over No 10’s rule breaking- not to mention last month’s sleaze scandal- could mean  the issue refuses to be swept under No. 10’s rugs anytime soon.

Labour’s deputy leader Angela Rayner has since accused Johnson of lying over the probe, with the Daily Telegraph reporting that Geidt is even considering quitting if the PM fails to explain the discrepancy.

While only Johnson himself can reopen Geidt’s inquiry, Labour has called for a parliamentary standards investigation.

Although convention once held that ministers resigned if they were found to have breached ministerial code, such as by being untruthful to parliament, Johnson’s team have so far bucked this trend.

Last November, the bullying inquiry into home secretary Priti Patel found that she had indeed breached code, and yet she remains in her post over a year on.

The Nolan Principles that inform any investigations undertaken by the Parliamentary Commissioner for Standards also emphasise the importance of honesty, stating that “holders of public office should be truthful”, but they have no power to probe the behaviour of ministers.

However, if the prime minister himself is seen to have flagrantly broken the ministerial code, the crisis would surely reach an altogether different level.

The Nolan Principles and Ministerial Code may have no legal standing, but the government’s own Coronavirus rules are another matter.

While on Wednesday the Metropolitan Police said they would not investigate the December 18 gathering, the prime minister has refused to commit to handing over to the Cabinet Secretary’s probe everything the government knows about all of the alleged No 10 gatherings.

This could mean that incriminating evidence remains under wraps, which if revealed, could convince police to launch an investigation.

Given that around 70,000 Brits have been fined for lockdown partying, a criminal probe remains a possibility.

However, there have been suggestions that the government could defend any dodgy gatherings as technically legal given that lockdown laws never applied to crown land, of which No 10 is part.

So while it seems unlikely that we are set to see Boris and his team behind bars, it is as much about the public’s perception of wrongdoing and double standards than it is about whether the alleged parties constituted criminal acts.

A poll by YouGov has found that 73 per cent of British people, including 61 per cent of Conservative voters, think that if Christmas parties did occur at Downing Street, then the police should investigate.

Should a police investigation ensue, and a formal claim of legal wrong doing be made around Number 10, this may on its own deprive Mr Johnson of the authority he needs to continue in post.

Threat 3 – Rebellion in the ranks?

Theresa May’s ex-chief of staff Lord Barwell told BBC Radio 4’s Today programme this morning that Tory MPs are frustrated by No 10’s multiple “self-inflicted wounds” not limited to the alleged lockdown parties, the Downing Street flat refurbishment and the Owen Paterson sleaze row, noting that information was “being dragged out of them, piece by piece, day by day, which is incredibly damaging”.

When quizzed over a potential ousting of the British prime minister by his own MPs, the peer said: “There are definitely those conversations happening – MPs have talked to me about it.”

The ruthlessness of displeased Tory ranks at Westminster is not something to be underestimated, with Theresa May and Margaret Thatcher being the most recent example of  prime ministers forced to resign after leadership challenges were triggered by their own MPs.

Several Conservative MPs told the Telegraph newspaper in recent days that letters of no confidence have been forwarded to backbench 1922 committee Chair Graham Brady. Although, they admitted that they were unlikely to yet be in substantial figures.

Barwell suggested that Johnson’s “position depends on being seen as an electoral asset” given the Conservatives’ 80-seat majority at the 2019 election, but he added that: “If over time that goes, he really is in trouble.”

Fresh polling from Redfield & Wilton finds that 63 percent of Britons think Johnson should resign as prime minister, and estimates that Labour have surged ahead of the government by 4 percentage points, their biggest since the 2019 general election.

And the potential for future revelations from this story to cause greater political damage is surely very real in the weeks ahead.

Threat 4 – Could Johnson’s own Cabinet turn against him?

Whether Johnson could be pushed out prior to an election could also depend on the views of his own top team.

Currently in Johnson’s favour, is that MPs are not united around a successor candidate, potentially in the way that they were around Gordon Brown at the end of Tony Blair’s premiership.

One minister told The Times this morning that no one challenger is in sight, and that Johnson would thus remain in his position “by default”.

There have been murmurings of potential successors, with backers of chancellor Rishi Sunak and foreign secretary Liz Truss reportedly canvassing for support, yet their rise to the top seems a far-off prospect.

With Plan B restrictions being rolled out, and a tighter Plan C already in the making, policymakers of all stripes clearly perceive the UK as still in the heat of the Covid-19 pandemic. Thus, any attempt to supplant Johnson amid such uncertainty could currently prove troubling for any minister, no matter their future ambitions.

The chances of a full-scale cabinet rebellion, as we saw in the May era, is also unlikely for another reason. The government’s top team is largely chocked full of MPs who owe their rise to Johnson’s ascendancy. Rarely has the composition of Cabinet looked so full of prime ministerial loyalists.

This week has arguably been the most negative since the PM’s rise to power, yet there are no major reports of ministerial grumblings.

There are of course small cracks in the cabinet’s unity. The health secretary Sajid Javid has expressed his aversion to compulsory vaccination, while transport secretary Grant Shapps has apparently made his opposition to vaccine passports clear.

Yet it seems highly unlikely that any of these ministers are yet poised to directly confront Johnson’s leadership, much in the style of Michael Heseltine back in the 1985 Westland affair.

Threat (or opportunity) 5 – Time for a break?

Political calculations aside, what if Johnson were to simply decide to pack in the premiership for greener and more profitable pastures?

After all, prime minister Boris Johnson is just 57 years old, practically a starry-eyed ingenue compared to some world leaders, and has become a father again twice within the past 18 months.

The prime minister may earn £157,372 a year- five times the average UK salary – but he has been hit with a slew of reports regarding pressures on his personal finances.

There have been extensive reports that Johnson’s divorce from his wife in November 2020, his (estimated) seven children, lavish tastes and diminished income since entering Downing Street, have left him hard up for cash.

Johnson will certainly not want for lucrative gigs whenever he leaves No 10.

After all, Johnson is still working on “Shakespeare: The Riddle of Genius”, a book for which he received an advance of £500,000 from the publisher’s Hodder & Stoughton in mid-2015.

But surely financial desperation would be the last reason Johnson would scurry from the top job?

For a man who appears obsessed with emulating Winston Churchill, and who reportedly displays a bust of Pericles on his desk, surely power and not money is his desired currency?