What is the smoking ban in public places?

In 2006, Parliament voted to ban smoking in all workplaces, on public and work transport, in pubs, clubs, membership clubs, cafes, restaurants and shopping centres in England and Wales.

The smoking ban came into force in Scotland on March 26th 2006. In Wales, it was enforced from April 2nd. In Northern Ireland, the ban came into effect on April 30th. England followed suit on July 1st 2007, with the entire UK now officially smoke-free in public places. 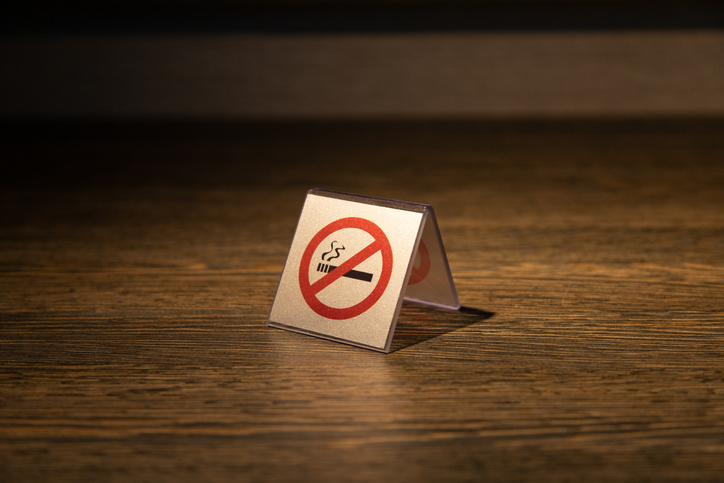 The 2006 smoking ban is now regarded as one of the UK’s most effective public health interventions.

What has been the impact of the smoking ban

A review of the impact of smoke-free legislation, published by the Department of Health in March 2011, concluded that there had been “a significant impact”. Studies in England revealed findings similar to those in other countries where smoke-free laws had been implemented. There had been benefits for health, changes in attitudes and behaviour and no clear adverse impact on the hospitality industry.

Health campaigners have also championed the smoking ban in public places as one of the most effective ever public health interventions. The introduction of the ban has gone hand in hand with a decline in smokers. Where in 2006 22% of adults smoked, by 2020 the figure had dropped to 14.1%. In the three months after the ban there was a 6.3 per cent drop in the volume of cigarettes sold in England.

Research in the British Medical Journal estimated that 1,200 fewer people were hospitalized for heart attacks in the UK following the ban, something which was directly linked to fewer smokers and better air quality.

Before the ban in UK pubs and bars, a study by the University of Bath study had found air pollution from cigarette smoke to be much higher than the ‘unhealthy’ threshold for outdoor air quality (set by the US Environmental Protection Agency), with levels in Scottish and Welsh bars often twice as high as in English bars. After the ban, air pollution in UK bars reduced by as much as 93 per cent.

Based on the success of the 2006 ban, some campaigners have pushed for smoking to now be banned in outdoor public spaces, but as yet this idea has yet to gain political traction.

Attempts for a full formal ban smoking outside of hospital premises have also met opposition. Critics have pointed out that not only is this measure difficult to enforce, but it is “inhumane” to prevent patients and their relatives from using smoking to relieve stress when they are in hospital.

A further change to smoking laws has been suggested in relation to restricting smoking in the home, particularly when children are present.

In 2012, a briefing to Parliament by the Royal College of Physicians detailed the dangers and disease burden of passive smoking on children. The College claimed that some 2 million children currently live in a household where they are exposed to cigarette smoke, and many more are exposed outside the home. It was claimed that passive smoking caused 20,000 cases of lower respiratory tract infection, 120,000 cases of middle ear disease, at least 22,000 new cases of wheeze and asthma, in children each year.

History of Smoking Bans in the UK

The majority of workplaces, shops, public transport and other public environments had banned or at least restricted smoking as a matter of policy by the mid 1990s, but it remained legal to smoke in most licensed premises.

In the years leading up to the 2006 smoking ban, there was an increase in support for more restrictions on smoking in public places. Although this partly reflected the decline in the numbers of smokers, it also reflected the greater assertiveness of non-smokers, many of whom were less prepared to tolerate smoking.

In August 2003, Pizza Hut announced that all 500 of its branches would become non-smoking and in January 2005, the JD Wetherspoons pub chain announced it would be following suit.

This change in attitude was seen in other places across the world. In 2003, New York City had also banned smoking in all public bars and restaurants, with only a few exceptions. Many towns and cities in California have also done this, and a few also banned smoking on their beaches and in public parks.

In March 2004, Ireland became the first European country to institute an outright ban on smoking in the workplace. Many advocates of a ban in England and Wales favoured this wording, because it emphasised the need to protect those who do not have a choice over their exposure to second-hand smoke, namely those working in smoky environments such as pubs and bars. Italy and Norway then followed suit, introducing a total ban on smoking in bars and restaurants.

In November 2004, the British government published a white paper on public health, detailing its intention to introduce a partial ban, which would make it illegal to smoke in enclosed public spaces in England and Wales. However, an exception would be made for licensed premises such as bars, private clubs and pubs where no food was served. There would be a complete ban on smoking in the bar area of licensed premises, to protect staff.

Legislation to this effect was introduced in October 2005, as part of the health improvement and protection bill. The ban was intended to come into force in 2007.

By this point, the Scottish Executive had already voted to introduce a complete ban on smoking in enclosed public spaces in Scotland, which came into force in 2006.

The Debate around the 2006 Smoking Ban
Support for a smoking ban was driven by evidence around the health dangers of consuming second hand smoke in indoor places. In America, the Centres for Diseases Control and Prevention has suggested that secondhand smoke causes nearly 34,000 premature deaths from heart disease each year in the United States among adults who do not smoke, alongside 7,300 similar deaths in non smokers from lung cancer, and 8,000 premature deaths in non smokers from strokes.

Critics of a ban disputed the claim that passive smoking increases the risk of lung cancer, and organisations representing the tobacco industry and smokers also argued that ventilators could be used to remove smoke from bars and pubs, negating the need for a ban. However, the medical profession has claimed that ventilators do not protect the public from the risk of lung cancer.
In the lead up to the ban on smoking in the workplace, there were concerns that the ban would negatively impact on bars and pubs, as smoking customers would be driven away. A report by the Restaurant Association before the move was approved, suggested it could cost restaurants £346 million and 45,000 jobs.

Opponents of a smoking ban also rejected the idea on civil liberties grounds, arguing that it was not the state’s role to determine what people do to their bodies. Supporters of a ban, however, made virtually the same point, arguing that they should not be made to breathe other people’s smoke.

In the end, support for a smoking ban outweighed the opposition, to the point that the government was forced to allow a free vote in parliament where MPs had the opportunity to back a complete ban on smoking in public places.  A ban on smoking in all NHS and government buildings was introduced in January that year.

There are a number of specific exemptions in relation to the smoking ban in public places. These include specialist tobacconist shops, and certain smoking research establishment. In specific types of buildings used for accommodation purposes for persons aged 18 years and over, there is the possibility to have a dedicated internal room that will not have to be smoke-free. This relates to Care homes, hospices providing palliative care, and prisons.

In the wake of that decision, the government announced it would raise the age at which people could buy cigarettes from 16 to 18 from March 2007 in Scotland and from October 2007 in England and Wales. In Northern Ireland the age of sale for tobacco products was raised to 18 in September 2008.

Recent changes to permitted smoking areas
In November 2013 the National Institute for Health and Care Excellence (NICE) issued a Guidance on Smoking cessation in secondary care that recommended banning NHS staff and patients from smoking on all hospital and clinic grounds. Implementation of this guidance was though left to the individual responsibility of local commissioners and providers.

Professor Mike Kelly, Director of the NICE Centre for Public Health said: “We need to end the terrible spectacle of people on drips in hospital gowns smoking outside hospital entrances. This guidance can help make that contradiction a thing of the past by supporting hospital smoke free policies to make NHS secondary care an exemplar for promoting healthy behaviour”.

In 2015 a new set of regulations was approved by Parliament which make it a criminal offence to carry children in a vehicle that is not smoke-free.

In February 2015, two squares in Bristol – the Millennium Square and Anchor Square – became the UK’s first major outdoor spaces to become smoking-free zones, in a scheme supported by the city council.

Smoking Rates – In 2019, the proportion of current smokers in the UK was 14.1%, which equates to around 6.9 million of the population – Source Office of National Statistics.

In 2020, E-cigarette use declined year-on-year, from 7.1% to 6.3% of the adult population in Great Britain, amounting to 3.2 million people [Source – Action on Smoking and Health (ASH)]

A significant body of UK and international evidence now exists which demonstrates that smoke-free laws are effective in reducing exposure to secondhand smoke (SHS). A study of bar workers by Bath University showed that their exposure reduced on average between 73% and 91% and measures of their respiratory health significantly improved after the introduction of the legislation.

Public opinion polls have consistently showed an increased support for the smoke-free legislation in England. A report by the London Health Commission stated that as of 2014, 78% of adults approved of the changes. It also said that 98% of venues were compliant.

“When non-smokers breathe in second-hand smoke – also known as passive smoking – it can be harmful. Research shows that non-smokers who live with smokers have a greater risk of heart disease than those who don’t.”  – British Heart Foundation – 2012

“Directly after the legislation, more people were trying to quit smoking, and more people succeeded because it’s much easier to avoid those situations,” says Hazel Cheeseman, Director of Policy at ASH (Action on Smoking and Health).

A significant body of UK and international evidence now exists which demonstrates that smoke free laws are effective in reducing exposure to Second Hand Smoke. In adults, previous studies have shown that bar workers have among the highest occupational exposure to SHS of any group of employees. A study of bar workers in England showed that their exposure reduced on average between 73% and 91% and measures of their respiratory health significantly improved after the introduction of the legislation. Children are particularly vulnerable to the effects of SHS and research in England has explored changes in exposure over time. A study found that between 1996 and 2007, SHS exposure among children declined by nearly 70%. The reductions were greatest in the period immediately before the introduction of smokefree legislation, coinciding with national mass media campaigns around the dangers of Second Hand Smoke” – Professor Linda Bauld, University of Bath, The impact of smokefree legislation in England: evidence review. March 2011.