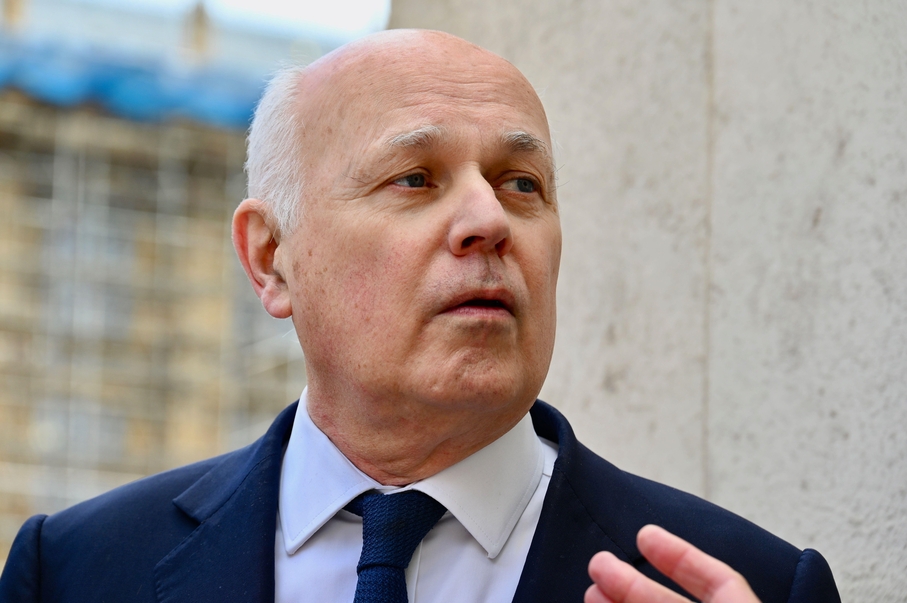 Legal appeals meant that the number of people due to be relocated was just seven out of the planned 130 on Tuesday morning.

Yesterday evening the ECHR intervened to halt the deportation of one person, subsequently issuing injunctions against multiple other people. A number of other last-minute appeals meant that the flight due to depart from Wiltshire’s Boscombe Down military base was grounded.

Referring to the situation as “ridiculous”, the former work and pensions secretary told LBC Radio: “This has turned into a legal farce really because all our courts have agreed that the government may go ahead with this, including the Supreme Court, to be overruled by a court that had no representations made to it and just intervened on the back of stuff it had read, as it were.

He went on to say that: “the government has got to deal with the convention anyway. If we have our own Bill of Rights then we shouldn’t have to refer constantly back to the court in Strasbourg because we should rely on our courts to be able to uphold human rights and the rule of law which they were doing the other day. So the government should proceed, continue to go on with this…”

Home Secretary Priti Patel insists the plan to process asylum seekers in Rwanda is key to preventing the repeat of tragedies such as last November’s drowning of 27 men, women and children in the English Channel.

The plans have faced strong criticisms however, with Archbishop of Canterbury Justin Welby blasting is as “immoral”, and Prince Charles allegedly describing it as “appalling” in private remarks.

Labour’s shadow home secretary Yvette Cooper has blamed the government for the havoc seemingly surrounding the Rwanda policy, stating: “There is no point in the government blaming anyone else but themselves. They have pushed ahead with a policy they knew was unworkable, unethical, and incredibly expensive because they just wanted a row and someone else to blame.

“They ignored all the warnings about the treatment of torture victims, the lack of proper processes in Rwanda, the fact that it will not stop criminal gangs, and the risk that it will make people trafficking worse. And they have still gone ahead with paying Rwanda over £120m.

“They are more interested in picking fights than in pursuing serious policies. This government has abandoned all British decency and common sense.”

Sir Iain went on to suggest that the European Convention on Human Rights needed to be “dealt with”.

Quizzed over whether this could mean a total UK exit from the convention, Sir Iain stressed: “The key thing is to whether or not the ECHR at the end of it all should have the final right in Strasbourg to overrule a supreme court here in the UK. After all, in America the Supreme Court in the United States judges all those sorts of cases and makes those decisions and both the High Court, the Appeal Court and the Supreme Court ruled that this was lawful for the government to go ahead.

Prime minister Boris Johnson hinted at a potential exit from the Convention yesterday, reportedly telling the Cabinet that: “Will it be necessary to change some laws to help us as we go along? It may very well be and all these options are under constant review.”

However the incumbent work and pensions secretary Thérèse Coffey has since appeared to downplay the idea.

When quizzed by Sky News this morning over whether a withdrawal from the ECHR could go ahead, she explained: “Well, I think that we have never put that, as far as I am aware, in our manifesto, certainly the 2019 manifesto. But I think it is just as we have done before, where we have gone into the court with the ECHR, a number of issues, and judgements have been made in favour of the government, we are a law-abiding government and I am absolutely sure that frankly we will get to any future discussions about that.

She went on: “But right now I am not aware of any decisions or hints even about that. The most important thing is that we tackle this issue right now, we will go back, I am sure, to the ECHR to challenge this initial ruling and because, as I say, British judges have made the decision, said that these flights could go ahead and I still think that is the best thing that can happen.”

In 2016, prior to the Brexit referendum, then home secretary Theresa May called for a withdrawal from the ECHR, arguing: “The ECHR can bind the hands of parliament, adds nothing to our prosperity, makes us less secure by preventing the deportation of dangerous foreign nationals — and does nothing to change the attitudes of governments like Russia’s when it comes to human rights.”

In a similar vein, Sir Iain told LBC today: “If eventually the ECHR rules that this is lawful then we will have got ourselves into a mess for no reason. The truth is this was always a voluntary affair, the ECHR, and many countries sign up to some but not all of the requirements in the ECHR, that is allowed.

“So the government needs to look at this very carefully and decide what we are going to do about it.”

He resigned from the Cabinet in 2016 after a series of high-profile disputes with then chancellor, George Osborne. The trigger for IDS’ resignation was a 48-hour post-Budget row about the government’s plans to cut the amount spent on disability benefit.