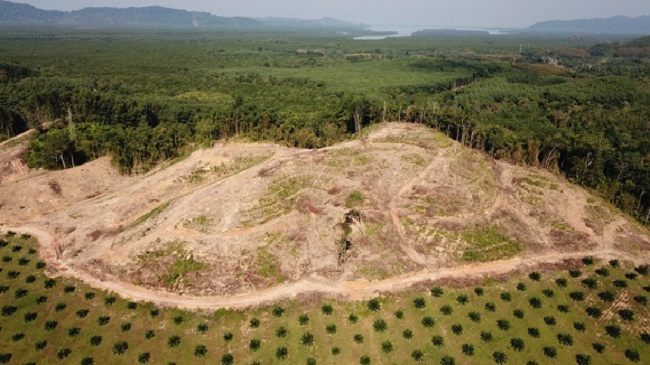 If we really want to stop deforestation, we need to stop buying the products that result from it

If anything is the epitome of climate change, surely it’s deforestation.  Trees and plants absorb around a third of our carbon emissions, yet since 1990 an estimated one billion acres of forest – an area roughly the size of Libya – has been lost.

So it was no surprise that the pledge by world leaders at COP26 this week to end and reverse deforestation by 2030 was hailed as a landmark moment for tackling climate change.

But concerns have already been raised in terms of failed past promises on this front.  Since 2014, when the New York declaration on forests to halve deforestation by 2020 was signed, the rate of tree cover loss has gone up by 43%.

One problem is that many tropical forest countries – such as Brazil, Argentina, Indonesia, Malaysia, Ghana and Cote d’Ivoire – have failed to keep past commitments to halt deforestation because they only have partial national control over cutting down trees.  In Brazil, for example, the 2006 Soy Moratorium and a 2009 agreement where four of the world’s largest cattle producers and traders agreed to a freeze on buying cattle from newly deforested areas in the Amazon rainforest resulted in major reductions in deforestation in some provinces.  Yet those were offset by significant increases in native vegetation loss in the neighbouring Cerrado savanna.

It’s a familiar tale in other nations.  In Indonesia – the global powerhouse of palm oil production – the omnibus bill watered down environmental laws within the country regarding permitting requirements and environmental impact assessments.   In Cote d’Ivoire, the forestry code encouraged further unsustainable cocoa production and legalised large-scale deforestation in already ravaged areas. In Ghana, it is widely recognised that illegal logging for timber continues due to a shortage of forest wardens.

Putting the responsibility on tropical forest countries to reduce deforestation also creates a risk of potentially diverting trade into countries and regions with lower standards or poorer protection. The resulting race to the bottom would mean that deforestation would not be reduced but simply moved to a country where it is easier to comply with the local laws.

More pertinently, the commitment doesn’t get to the heart of the issue.

We’re searching for solutions in the wrong place. Countries with tropical forest regions are not chopping down trees for the sake of it – it’s happening because of the demand from Western nations for their products; eight main commodities in particular: beef, leather, soy, palm oil, cocoa, timber, pulp and paper, and rubber.

This means that rather than targeting these countries by trying to police deforestation, we need to shift the emphasis to why it’s happening.  If Western countries ceased importing these products from countries where deforestation is an issue, we could slow down the loss of plants and trees much more rapidly.

How can we do this? We could stop eating South American beef and dairy, which would in turn reduce demand for the soy that feeds the cows. We could refuse to wear South American leather.  Companies could end the use of Indonesian palm oil in a raft of consumer products and source their timber and paper from forests in northern Europe, where tree felling and planting is done on a sustainable basis.

This would have a huge impact.  According to the Joint Nature Conservation Committee, if the global market for beef shifted to avoid all production involving deforestation, then over 2 million hectares per year would be saved – equivalent to 25% of global forest loss.  Another 9% would be saved if soy and palm oil were also produced sustainably.

If companies don’t take action, the UK government could legislate to require them not to use commodities in their supply chains that drive further deforestation in vital tropical forests.

If Western economies really want to make an impact on deforestation in the global South, then they should move to stipulate that all their imported commodities should be sustainable. Only by destroying the major markets for the products of deforestation can we halt it.  It may not be in our power to police countries like Brazil. But it is in our power to eliminate forest risk commodities from our supply chains.

Dr Stephanie Wray is the managing director of Nature Positive.