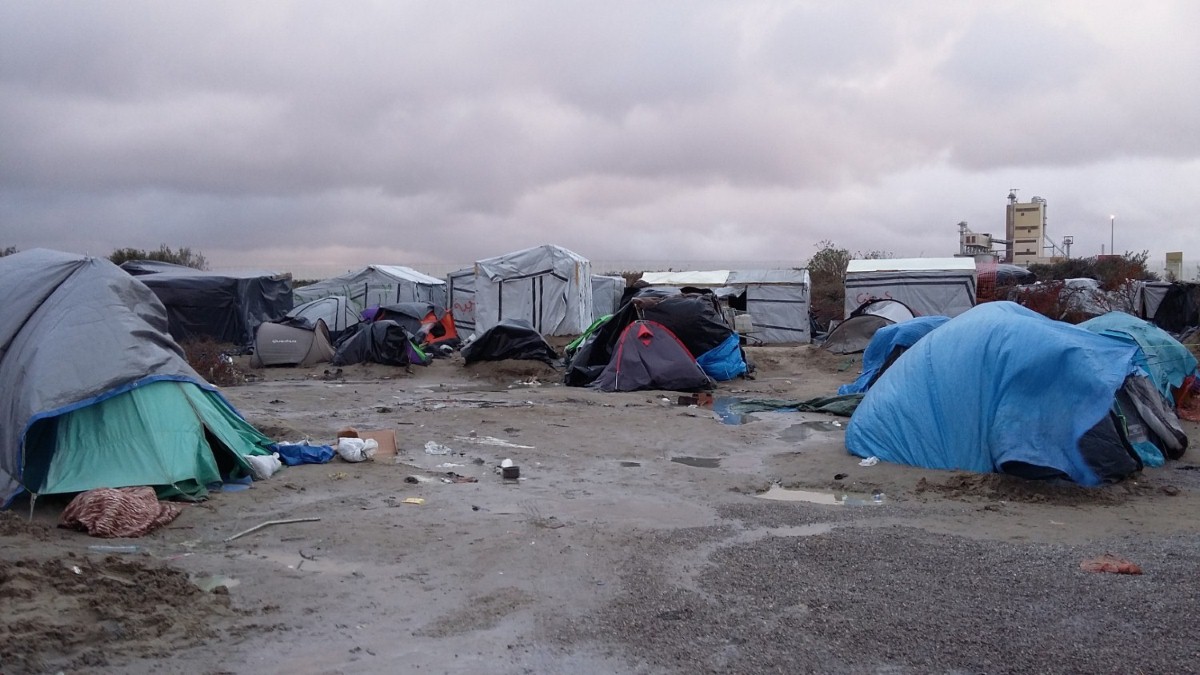 Amid the desolation, hope emerges from the Calais jungle

"You’d be prosecuted for keeping dogs in these conditions" a fellow volunteer said to me this weekend, as we watched driving rain and gale-force winds tear the Calais Jungle apart. Secure facilities for women and children are overflowing, conditions were described as 'diabolical' even before the winter came, and French riot police routinely employ tear gas against unarmed and starving refugees. The concept of a 'breaking point' has long since lost any meaning – the camp is broken beyond repair, beyond relief.

The Jungle's population has doubled since I visited two months ago, and a hundred more arrive every day. A matter of hours from two of Europe's great capitals, thousands of our continent's most vulnerable individuals are sinking into destitution, cut loose from even the most basic state protections.

While around two thousand claims for asylum in France have been made from the Jungle, for the many residents it is a staging post for the dangerous attempt to cross the Channel. With limited sources of reliable information and a constant stream of new arrivals, it is also a place which runs on received wisdom, and the received wisdom remains that illegal entry to the UK is the only way to begin the asylum process. Slowly, however, it's becoming clear to some of those invested in the welfare and future of the Jungle's seven thousand residents that this assumption is there to be challenged.

UK immigration officials have had a presence across the Channel since 1991, when it was agreed that Anglo-French border controls would be 'juxtaposed', establishing a French presence in Kent and, for the first time since 1558, a British border in Calais. In the past, asylum claims could be made (as gov.uk still suggests today) 'at the UK border, if you make your claim as soon as you arrive'. But now, under pressure from a Home Office at war with immigration, officials play by different rules, hiding behind its interpretation of the EU regulation known as 'Dublin 3'.

Under Dublin 3, an asylum seeker who arrives in the EU must claim asylum in the state in which they first arrived, and were registered. Not designed for an humanitarian crisis like that which has engulfed Europe, the regulation places the burden of a mass overland migration on the EU's border states, and it has been emphatically disregarded by Germany as they continue to lead Europe's disjointed response to the crisis. Dublin 3 has been employed by the UK to deport thirteen thousand asylum seekers since 2003, but recent and ongoing legal research around the regulation, as well as awareness-raising efforts, could provide some hope for those trapped in the the Jungle.

What is already known is that there are a large number of refugees within the camp for whom Dublin 3 should already work in their favour. The regulation is clear that an asylum seeker who has close family living legally within an EU member state has a right to claim asylum in that country, and to reside there while they do so. As the Sunday Times reported, London-based legal teams went to the Jungle recently to make contact with a number of refugees there who have close family members residing in the UK, and confidence is high that the first of these cases will be successful. A spokesman one of these legal teams told me: "we wouldn't have launched these cases if we didn't think there was at least a decent chance of success. We've started with unaccompanied minors who, if the system was working properly, would have access to these rights under Dublin 3."

Currently, there is nothing to incentivise the French authorities to conduct any official registration of the Jungle's residents, since if they do so they are likely to find themselves in a position of responsibility for a large proportion of them (particularly given their penchant for destroying refugees’ travel documents). Instead, the camp continues to fester, unchecked, and 'people who are eligible for asylum under Dublin 3 are losing out, while nobody deals with the Jungle as a whole.'

There is heroic work being done by a sprawling network of volunteer organisations who alongside their tireless distribution and building efforts run creative workshops, the 'Jungle Books' library, the Good Chance theatre, free kitchens, day-care centres and language classes. Despite those efforts, in the two months since I last visited, living standards have deteriorated alarmingly, and conditions in the Jungle undeniably constitute human rights violations. "The situation is worse than it was two months ago," concedes Hettie Colquhoun, head of operations at the warehouse of L’Auberge des Migrants, one of the largest volunteer organisations working in Calais, "but it would be even worse, much worse, if we weren't doing that work."

A tribunal in Lille earlier this month ordered the Pas-de-Calais prefecture to begin rubbish collection, install clean water points and identify and protect vulnerable or unaccompanied minors within the Jungle, acknowledging that the population had been "largely left to fend for themselves, with no protection from the state", amid living conditions "not suitable for anyone".

Against this backdrop, a challenge to the Home Office's asylum policy is conceivable based upon the legal commitment of every member state to the ECHR. There is precedent too, in previous cases such as MSS v Belgium and Greece which have held that EU member states have acted illegally by deporting a refugee into another state’s asylum system, where that refugee's human rights cannot be guaranteed. Rulings of this kind have spelled the end for what is called the 'presumption of compliance' – the blanket assumption that any EU member state will treat its asylum seekers equally well, which previously allowed for refugees to be deported without due regard for their safety.

Legal research is examining how these verdicts might be applied to the Jungle, and there is cautious optimism alongside an understanding that a long process is only just beginning. "Our argument," the legal team’s spokesman continued, "would be that the very presence of the Jungle, and so many people who clearly haven't claimed asylum in France, is proof in itself that the French authorities are not actively processing everyone. If the French authorities did process everyone, they'd work out who had claims under Dublin 3, and get people out of the country."

For now, the struggle on the ground is to get information about Dublin 3 disseminated widely. Sarah Story, a volunteer working with Jungle Books, told me that "the Jungle has a short memory. Refugees are chronically under-informed about their legal rights and how to negotiate the UK and Europe's increasingly draconian asylum regimes. More information is absolutely crucial in order for people to make informed choices about their future and to be equipped and empowered with the tools to challenge the horrific conditions that the UK and French government have abandoned them in." For Story, it's "frustratingly slow" work. "There should be more people doing it, and better qualified people doing it."

This side of the Channel, UK-based human rights organisation Right to Remain are crowdfunding for an information 'toolkit' to support refugees once they arrive in the UK. Michael Collins, one of the group’s coordinators, took the draft of their first toolkit out to Calais in 2012: "people really thought when they got to the UK that's the hard bit over. But they're going to be refused, detained, going to have their legal aid cut off so they can’t get a lawyer. We're not talking about people working the system, we’re talking about people knowing their rights."

For Story and the other members of the nascent Refugee Information Network, the goal is wider: to provide "basic information about all EU countries: what rights you'd have there, what the asylum process is like, but also cultural issues like the level of acceptance of refugees in those countries. So they can say 'I don’t want to stay in Calais, I can’t get to the UK, it’s too dangerous to jump on a train – maybe I can go to the Netherlands.' So they can make choices, rather than risk their lives."

Bob Trafford is a philsophy graduate and journalist. Follow him @bobtrafford.