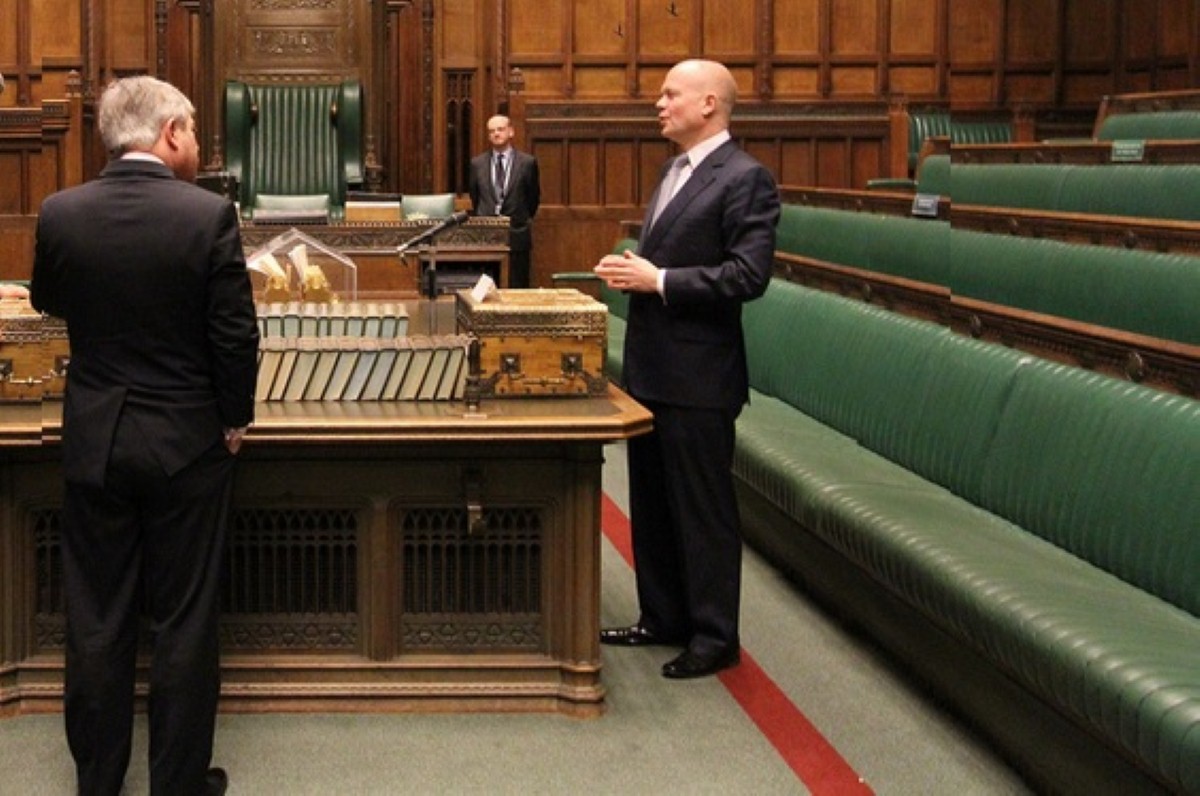 Bercow was visibly moved as the government motion was defeated by 228 votes to 202.

Technically the division was a free vote but became deeply partisan after chief whip Michael Gove arranged for a whipped party meeting before this lunchtime's vote.

The result blocks a Conservative effort to allow Bercow to be challenged by Tory backbenchers when the next parliament meets and elects its Speaker.

It follows extraordinary scenes in the Commons. Labour MPs shouted "shame" as Hague indicated his approval for the vote to go ahead – and applauded and cheered as the result of the division was read out.

Earlier, in the official debate, procedure committee chairman Charles Walker – whose report has been used as the pretext to push the matter through – prompted a standing ovation from Labour MPs as he declared he had been "played as a fool".

It came at the culmination of a deeply unusual final day of the parliament in which Bercow fought back against Hague's manoeuvring by granting three urgent questions –
buying him some more time for Labour MPs to rush back to the Commons to attempt to save him.

In the urgent question brought by Sir Gerald Kaufman, who will be the father of the House in the next parliament if he is re-elected, Hague was told he was being "grubby" and "nauseous".

Shadow leader of the House Angela Eagle declared: "In my 23 years in parliament I've never seen a government behave in such a grubby and underhand manner."

Jack Straw, former leader of the House, said Hague's motion was "an underhand measure to try and undermine the incumbent in the chair".

Conservative backbencher Jacob Rees-Mogg accused the government of parliamentary "jiggery-pokery" and Tory MP Julian Lewis said there was no case for a debate "at the 11th hour".

This is not the way it's supposed to go on the final sitting day of a parliament.

Usually the Commons' slow winding-up sees an unusual power-shift: because of limited time as the government tries to rush through its remaining bills, the opposition takes control because ministers need its cooperation to get the legislation through.

But because the so-called 'zombie parliament' has made it relatively straightforward for the coalition to complete its light legislative business, there's been ample time for the Conservatives to plot today's extraordinary coup.

It's a story of parliamentary subtleties, backhand plotting and, finally, a stab in the front. Here's how it came to this…

Until today the real crisis for John Bercow in this parliament was over his botched attempt to split the job of the chief civil servant he works alongside, following the retirement of the hugely respected Sir Robert Rogers.

Bercow wanted a 'chief executive' to come in and take over the administrative side of the job, while a more theoretically-minded individual would continue to take care of the constitutional aspects of running the Commons fairly and effectively.

The five-person selection panel that backed Australian Carol Mills proved intensely popular with MPs over the summer. By the time the former leader of the House Andrew Lansley revealed to MPs the Speaker had deliberately changed the wording on the job specification, the writing was already on the wall for Bercow. When Rogers had been appointed in 2011, the requirement was for a "detailed knowledge" of parliamentary rules. The Speaker had that changed to "awareness", leading Lansley to conclude the process was "ill-founded".

When the Commons returned after last year's summer break Bercow went into retreat, halting the process and handing the matter over to a specially-formed select committee. It concluded the appointment process had to be started once again.

That has now been and gone. David Natzler, the former assistant clerk, was appointed earlier this week. Most say he should have got the job much, much sooner.

Bercow wouldn't have been the only one sizing up the damage to his reputation from this painful episode.

The attitude of the government, in particular, was critical. For years David Cameron and Bercow had traded veiled jibes at each other in PMQs. Sometimes the Speaker would slap down the prime minister. At others Bercow might be despatched on an uncomfortable trip to train up a struggling parliament in a less palatial corner of the world. It was all rather tense, but at least it was stable.

It didn't initially look like much had changed after the Mills fiasco. Sources close to William Hague, the leader of the House, indicated that it was never their wish to oust Bercow from power. They just wanted him to accept that he had over-reached and now needed to get back in his box.

A tamer, meeker, more pliable Speaker was what the Tories wanted. They could work with the Speaker, even if their backbenchers resented it. And that was how matters rested until, with Labour MPs heading off to their constituencies early, Hague made his move.

Going for the jugular

The procedure committee recommended that the rules controlling the process by which a Speaker is elected should be changed.

Right now the voting process is public: like any other division MPs have to physically make their way through the voting lobbies to be counted.

This is problematic because those opposing a Speaker's candidate might find themselves unfairly treated as a result.

That's why the Commons' procedure committee thinks a secret ballot would be a better idea.

It would allow a single malcontent who shouts out 'object' to trigger a vote – and, crucially, give Tory backbenchers unhappy with Bercow the chance to find an alternative who could actually beat the Speaker.

I've been on Procedure Committee for 5 years. Government's sneaky plot to ambush the Speaker today is 100% personal.

Today's debate will be followed by a free vote, meaning the Tories are not technically being whipped on the issue.

But chief whip Michael Gove has succeeded in getting many Conservative MPs to stick around by telling them they must attend an election briefing from campaign strategist Lynton Crosby this morning.

"This is a grubby last minute plot in the dying hours of this parliament to try and change the procedures of the House," shadow leader of the House Angela Eagle said.

"The Tories are trying to play politics with the speakership because they know they won't win a majority at the next election."

And she has received support from an unlikely quarter. Julian Lewis, a Conservative backbencher, has emailed colleagues pointing out that the procedure committee hadn’t ever envisaged a debate taking place quite like this.

Only two of its members had ever supported the change from an open ballot to a secret one.

And while it did recommend a debate back at the start of this parliament, it also made clear it would be very wrong for it to be "tucked away on a Thursday". Let alone what is literally the ultimate Thursday – the final one of the parliament.

"One need not be a particular admirer of the Speaker to realise that this is no way for decent people to behave," the Tory MP says of his former party leader.

"I trust that members of all parties will not allow themselves to be manipulated in this unworthy fashion, and will make the effort to attend and vote appropriately tomorrow, by rejecting the proposal to re-elect the Speaker secretly rather than openly."

Not that Hague's office accepts any of this. In particular, one source makes clear, it's unreasonable of Labour first to moan about a zombie parliament and then kick up a fuss when the government does try and complete proper business on a Thursday.

The leader of the House is also completing a process of democratising the Commons that has slowly taken place throughout this parliament: the Speaker's election is now the only one which doesn't take place by secret ballot. "It's a perfectly reasonable piece of reform," the source close to Hague said.

So why now? Why do it so obviously prior to the re-election of the Speaker? Because it must be done before the end of the parliament, like all the other motions today. The other motions are relatively petty issues, on matters like extending the deadline for tabling amendments and ensuring the petitions committee chair is paid. And then there's this – a motion which gives Tory backbenchers the chance they desperately want to end the Speaker's career. It's an extraordinary moment – and one which has ultimately left Hague looking more like a loser than Bercow.