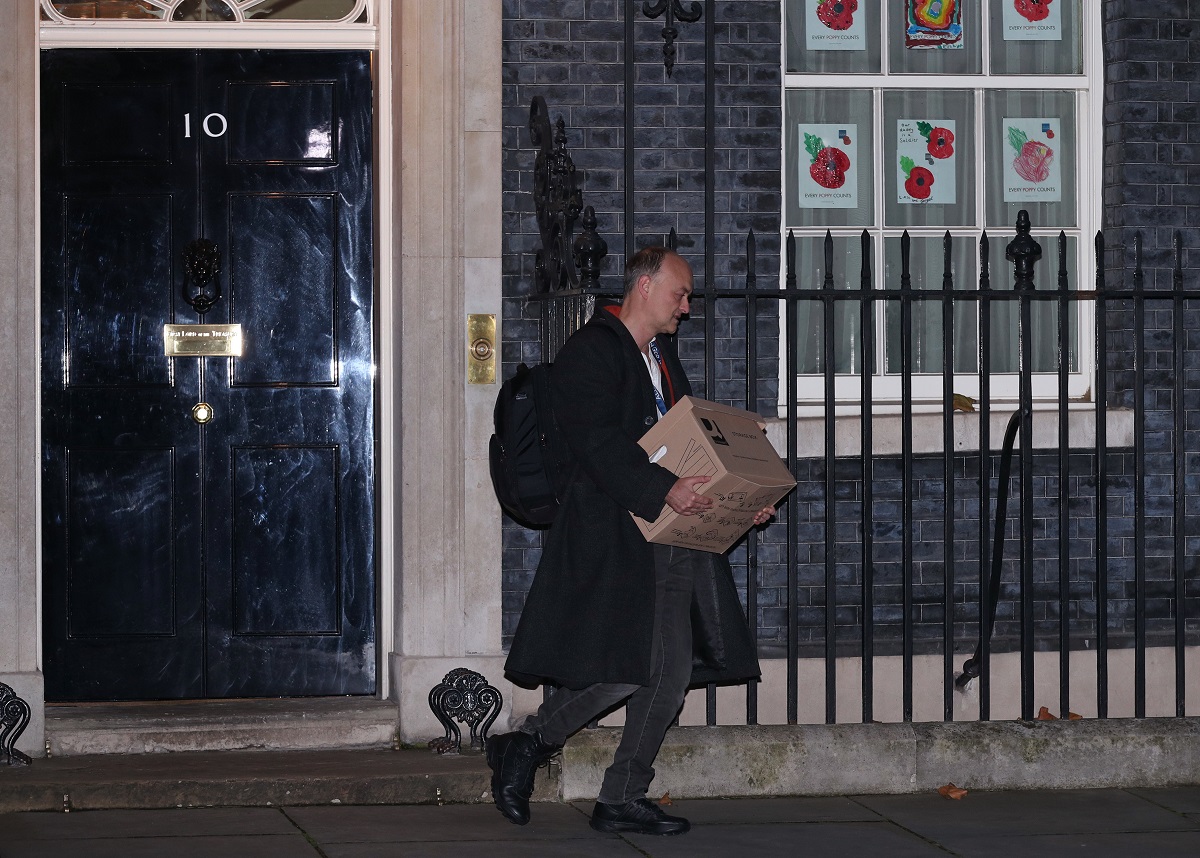 Like you, I remember double-taking on my first viewing of this still. In one moment, we find 2 years of hard work, of failure, distilled. Of the photo’s stars: Sedwill, Cummings and Johnson, only the last-mentioned survives—and then again, only just.

I am by no means the first to note the symbolism of this famous pic. The photo’s microcosmic commentary became somewhat of a cliché during the macrocosmic spectacle that one Tory MP labelled “Dom’s reign of terror”. In this snapshot we see Cummings alone, scheming (presumably) and staring down the suited Whitehall staffers opposite. Back in 2019, this imagery aligned perfectly with Cummings’ media portrayal and, crucially, is emblematic of the lack of nuance applied therein.

“Britain Hates Johnson’s Machiavelli”, carried Foreign Policy after the “Durham” scandal; “The Machiavel in Downing Street” read the New Statesman six months prior. It appears no article on Cummings was complete without a Machiavelli namedrop; and I’m sure the Oxford history graduate in question smirked at this amateurish renaissance. For us, however, the motivation behind this newfound interest in 16th-century philosophy is cause for great concern. By conscripting Machiavelli’s reputation for their own ends, the media launched a broader project: to style Cummings an erudite, if unscrupulous, diabolical genius.

The Channel 4 drama “Brexit: The Uncivil War” was pivotal in cementing Cummings’ “mastermind” status in the public imagination. The film depicted a self-consciously clever Cummings cutting through incompetent, bit-part politicians to secure Leave’s victory in the 2016 EU referendum. Cummings was played by Benedict Cumberbatch, famous for portraying such exceptional minds as Sherlock Holmes, Alan Turing and Marvel’s Doctor Strange. Cumberbatch needed to draw on this experience and more to depict the devilishly clever Dominic Cummings. The film made good television, but of course it did—for this “Cummings” is a mere literary trope.

Society has long-been obsessed with the shadowy courtier. In his coverage, Cummings drew from a tradition including all of Rasputin, Thomas Cromwell, Dick Cheney, Peter Mandelson and, of course, Niccolò Machiavelli. Like his forebears, Cummings’ power-behind-the-throne allure proved irresistible to writers. Combining themes of influence, cunning and intrigue, Cummings was fashioned an omnipotent consigliere: Machiavelli on steroids. Plainly, all this was far more interesting than reality. Rather than a reflection of great-skill, Cummings’ ascent up the greasy-pole exposed a political-class out of ideas. More pertinently for us, however, Cummings’ “master of the dark arts” portrayal revealed a comment-class out of its mind.

For sure, Cummings long-styled himself a visionary messiah figure—and he was first introduced in 2016 as such. By rights, Cummings does deserve some “praise” for Brexit, but his subsequent influence has been significantly overstated. Since 2016, commentators have adopted Cummings’ delusions-of-grandeur without critique. In the view of far too many, it was Cummings—and Cummings alone—who carved out Britain’s destiny; through Brexit, through Boris, through COVID…

It wasn’t just the media creating this image, Cummings wore each of his sobriquets—damning or not—as proudly as an ill-fitting beanie. The speculation assured Cummings that he really was as great as he thought. In time, the headlines served to motivate Cummings. If the media wanted a Machiavel, he would not let them down. 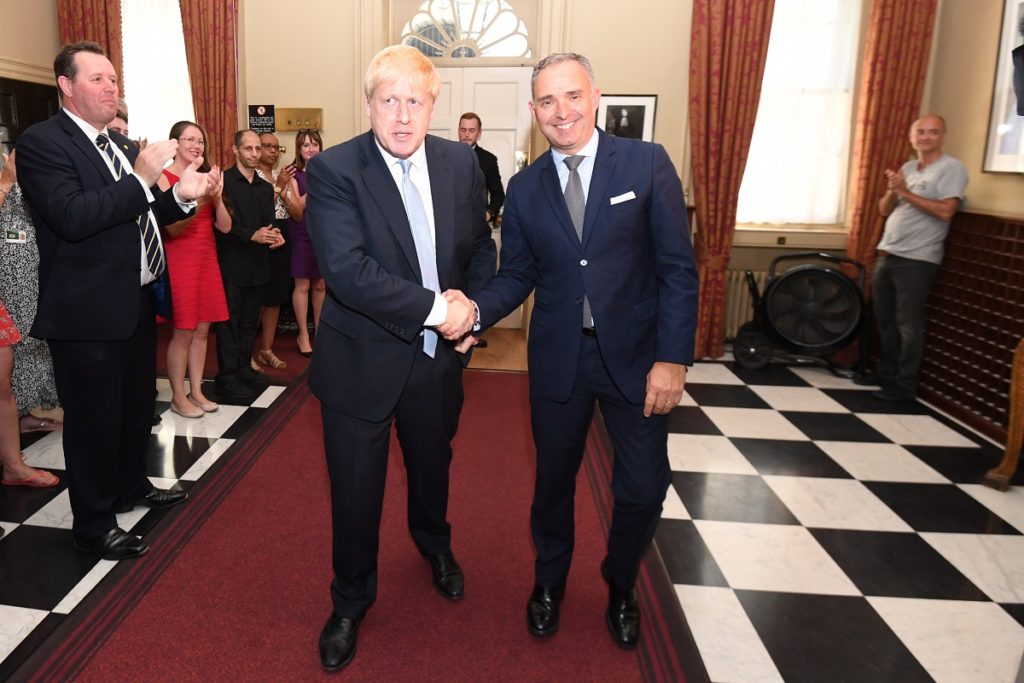 Boris Johnson is greeted by Mark Sedwill on his first day in Downing Street. Dominic Cummings can be seen in the background (right). Credit: Press Association.

In May 2020, it was reported that Cummings had warned the world about coronaviruses in a wider 2019 blog on pandemics. If this was true, Cummings’ “mastermind” credentials would have been more than vindicated. However, such reporting long-left facts behind. So much for the eager technologist, Cummings was caught editing in the passage on coronaviruses sometime between April and May of 2020. Interestingly, these dates directly align with Cummings’ extended trip to Durham. Sure enough, Cummings went on to reference his COVID “prediction” in his infamous post-“Durham” Downing Street press conference.

The deviousness on show here was astounding. At this moment of national and personal crisis, Cummings focussed on improving—or at least proving—his media image. Refusing to have his mystique tarnished by scandal, Cummings opted to flaunt false powers of projection. At once, he exposed his recklessness, inflated ego and contempt for the British public.

It is high time we rethought Cummings. Yes, he headed the Brexit campaign and contributed to Johnson’s 2019 General Election effort—but what else of his influence? To offer a short summary: Cummings “masterminded” Johnson’s unlawful prorogation of parliament, mishandled the sacking of Sonia Khan, took a disastrous drive to Durham, oversaw the A-level results fiasco and suffered from a serious lack of foresight on free school meals. Had Niccolò Machiavelli made an opponent of one Marcus Rashford, he might have handled it all better.

Further, we need to stop lending support to Cummings’ “lone-messiah” routine. The Leave campaign was bolstered—maybe decisively—by Farage and his ilk. And Isaac Levido and Lee Cain joined Cummings in seeing to Johnson’s 2019 General Election victory.

Nonetheless, some reality did seep into Cummings’ media coverage. Cummings does possess a deep-seated disdain for the British political and administrative classes; he’s an outsider; and, undoubtedly, an inflamed, nationalist reactionary. But what this image fails to project is Cummings’ origin-story. The media failed to answer—or even ask—one very-basic question: where did Cummings come from?

Cummings did not operate in a vacuum—nor did he “break” British politics single-handedly; Cummings’ “victories” were not his, not in outcome or execution; and Cummings was never “master” of the populistic forces he helped unleash. By styling Cummings an invincible schemer supreme, we distract from the real forces driving British politics. It allows us to ignore the discontent across Britain that enabled Cummings’ short power trip.

Cummings was a bad influence on British politics and it is good that he has gone. He was important to the rise of our divisive political culture and laid crucial path-stones to the post-truth age. Nonetheless, the post-Cummings age will hardly be so different. Ad hominem side-swipes remain all-too relevant and no armistice has been reached in Britain’s “culture war”. Cummings’ departure from Downing Street was a rejection of the individual rather than his ideas.

After all the speculation, Niccolò Machiavelli and Dominic Cummings finally have something in common: they are history. Our attention must now turn from the former “disruptor-in-chief” to the problems he helped expose. Cummings’ coverage provides a crucial lesson in how we analyse our leaders; for if we continue to obsess over not-so-great “great men”, the societies that surround them fall from view.