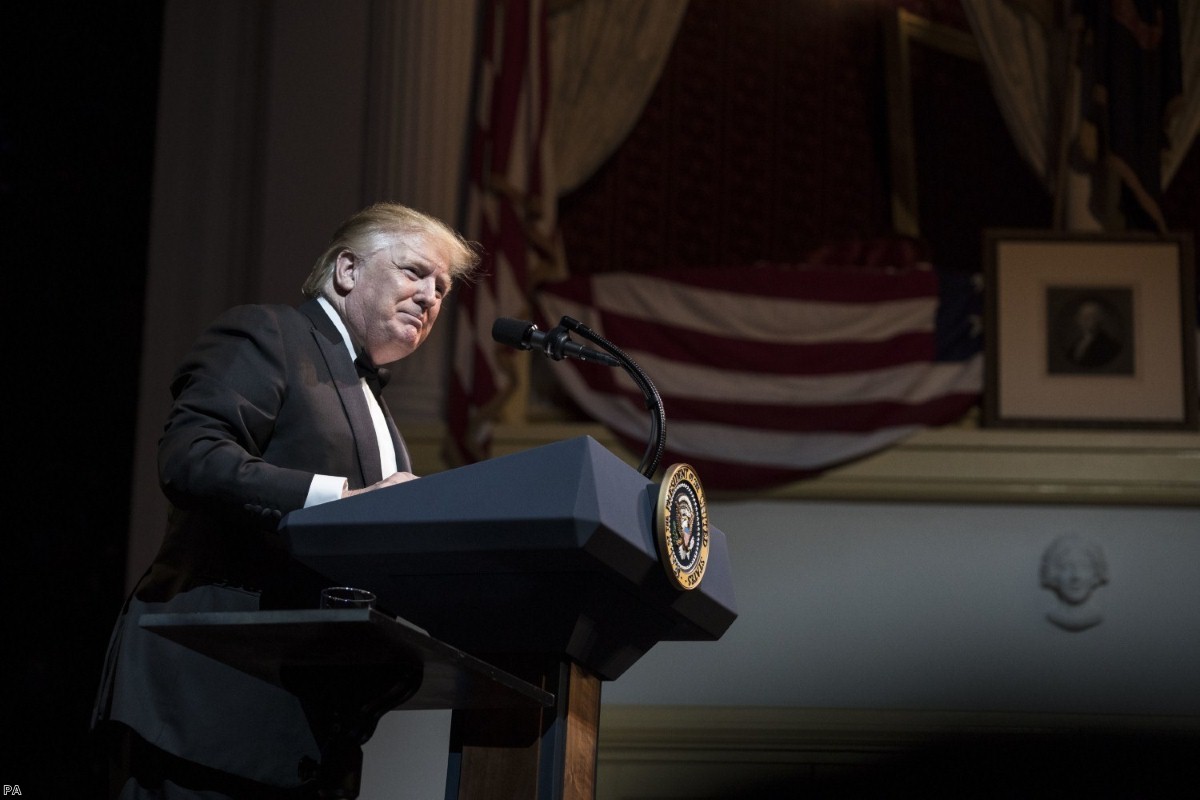 It is one of the starkest of all Brexit contradictions. The most strident supporters of the project want to leave the EU because it imposes demands upon the UK, but then also secure a trade deal with the US which would involve accepting a whole new set of obligations.

And then there is the other glaring contradiction: that many insist the UK will be fine to trade under WTO rules, without noticing that President Donald Trump is currently undermining those very rules.

Doubtless these Brexiters will be out in force as the president visits the UK, selling the beauty of no-deal Brexit and promoting a new UK-US trade deal. But the truth is rather different. It's increasingly clear there's no road to 'Global Britain' that goes via a Trump-led US. Any such deal is going to be overwhelmingly stacked in favour of the US, as they've already made clear. It will be explicitly designed to increase barriers between the UK and the EU, in keeping with an anti-trade president.

This isn't speculation. The US has been completely open about their motivations with regard to the UK. In their summary of negotiating objectives, one aim is to "eliminate practices that unfairly decrease US market access opportunities or distort agricultural markets to the detriment of the United States". That means one thing: our old favourites, chlorinated chicken and beef produced with growth hormones, would be on their way.

They're also clear that the UK should leave the European standardisation system, which provides UK business with opportunities to shape technical regulations across the continent, and the EU approach to Geographical Indications, that protects products across the EU and globally against imitators, including UK products like Scotch Beef, Scotch Lamb, and Cumberland Sausage. If that wasn't enough, they’d also like the NHS to pay more for US produced drugs.

In all of this the US administration have been encouraged by UK voices, such as the IEA's trade guru Shanker Singham, telling a formal US hearing that "the opportunity for a major G7 nation to depart from the EU's application of the precautionary principle in agriculture also represents a huge opportunity for America's farmers and biotech firms".

MPs, including Conservatives, are far from convinced. George Eustice wrote recently that "in the court of public opinion, if the choice is between the commercial interests of banks or the welfare of chickens, the chickens will win every time". Trump's Democrat opponents also have concerns, with House speaker Nancy Pelosi warning that the UK departing from EU regulations meant a hard border on the island of Ireland. "If there is any harm to the Good Friday accord," she said, "no treaty".

Against such opposition it really does seem that a UK-US trade deal would struggle to pass parliament or Congress. But on the evidence from both sides of the Atlantic, that won't stop the talks.

Not only does President Trump want a one-sided trade agreement, he then also wants to tell us who we can trade with. The revised agreement between the US, Mexico, and Canada includes a specific section which could penalise the latter two countries if they were to sign a trade agreement with China. Then there's the case of US action against Huawei, where the strong suspicion remains that this is less about security concerns and more about wanting to prevent a Chinese company being so strong in the telecoms field. If it is just about security, then the fact the UK has an established program to check Huawei products should reassure the US.

Then we have Trump’s actions with regard to other countries. The tariffs have already been imposed on steel, and threatened on cars, under the guise of national security. The tariffs on China, and now sabre-rattled at Mexico, undermine the most fundamental premise of the WTO – that countries must treat all members equally. Trump's grounds in each of these cases are somewhere between dubious and ridiculous. On cars, he's given a six month grace period before imposing tariffs which could cause serious global economic harm, claiming that the American-owned auto industry contributes technological innovation to the defence sector, and therefore must be protected.

There is a real threat that other countries see the US getting away with such behaviour and follow suit, leading the WTO to cease effective functioning. That's an even more pronounced threat right now, because one of the key parts of the organisation which would stop this happening – the appellate body – will shortly cease to function because of a US veto on new members. It's quite convenient for a country breaking the rules so flagrantly.

It isn't even as if the UK stands to gain much from dealing with President Trump. The UK and US have a significant trade relationship already, and it seems unlikely that the trade deal envisaged by the US would be particularly economically significant for anyone other than US farmers. Certainly the benefits would be significantly less than the cost imposed by new barriers to EU trade. And it appears from the case of Mexico that President Trump can't even be trusted not to threaten extra tariffs on those he's already negotiated with.

Our farmers stand to lose. And there's something else. Our credibility will be damaged too, by signalling approval of an approach to world trade which could do so much to undermine our trade elsewhere in the world. Many leading US trade experts are in despair at the approach of their president. It's a frustration I share, having worked for three years on the proposed EU-US trade deal, the Transatlantic Trade and Investment Partnership, the successful conclusion of which could have prevented the UK being stuck between the regulatory systems of rival economic superpowers. None of us can be considered opponents of genuinely closer US-UK ties. But we just don't see it on offer.

A deal without mutual benefit is scarcely trade, and the deal President Trump has in mind seems closer to an abusive relationship with a vulnerable country than a genuine partnership. There are those this week who will rush to embrace the president's promises of a trade deal. But any dispassionate assessment of his record over the last three years suggests we should avoid him at all costs.

David Henig is director of the UK Trade Policy Project at the think tank ECIPE (European Centre for International Political Economy) and a former UK government trade policy specialist who spent three years working on EU-US (TTIP) talks. You can follow him on Twitter here.