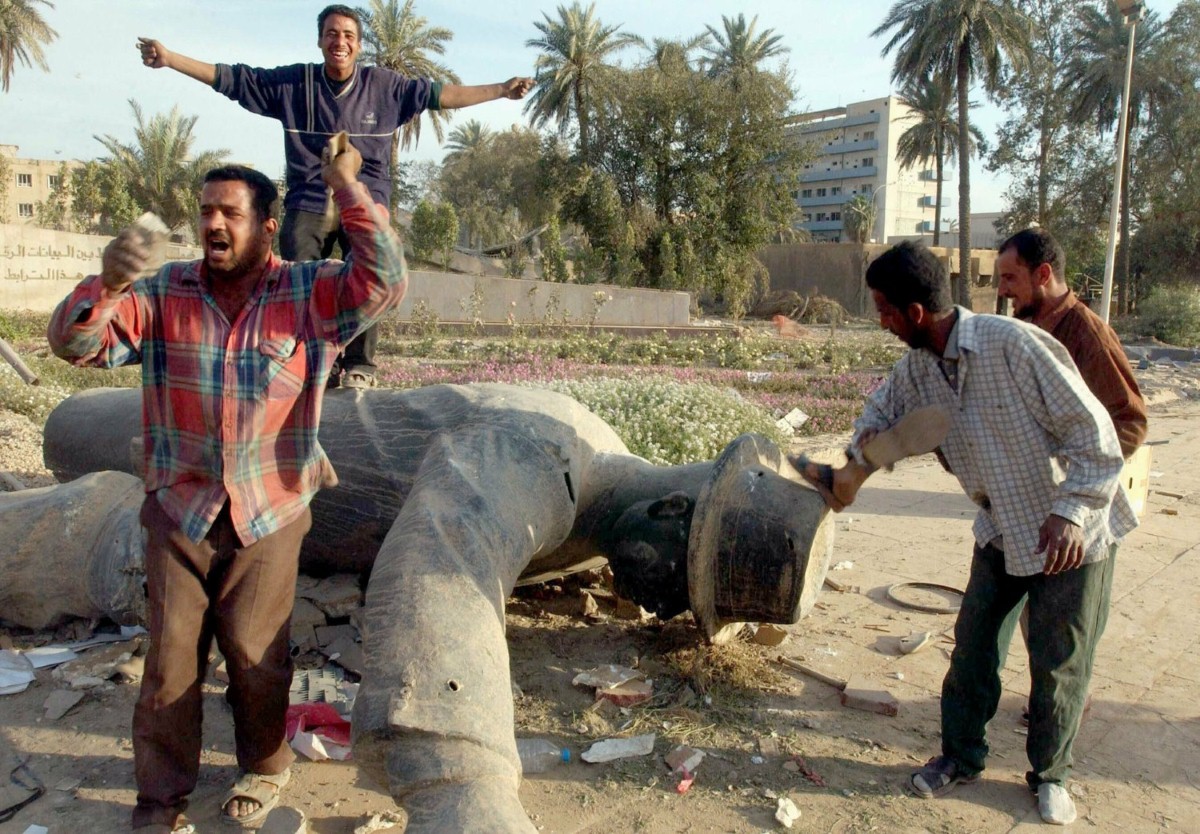 Iraq 15 years on: The birthplace of post-truth

Television screens fed back carefully-crafted images of the initial bombing campaign. It could almost be forgotten that this particular military campaign opened in an era before social media and the widespread adoption of high definition broadcasts. Twitter was three years from existing but there can be little doubt that, had it been around at the time, the hashtag #shockandawe would have been trending around the world.

Fifteen years later, the legacy of the Iraq war has been one of disintegration in the Middle East and increased insecurity in the West. The political behaviour of the US and the UK sowed the seeds of the contemporary post-truth era. Now, in a political culture dominated by Brexit and Donald Trump, we can peer back at the recent past and spot quite clearly where our problems originated.

The 43rd US President expressly desired it and the youngest UK prime minister since the era of the Napoleonic Wars would help him deliver it. But the confirmation of war didn't take place just before the outbreak of fighting. It was contained within a written record of a meeting that took place much earlier.

Tony Blair was in attendance, alongside his foreign and defence secretaries, the attorney-general, and the leading lights of British intelligence. Also present, and symbolic of the growing confluence of media and political worlds, was Alastair Campbell. The written record, now simply known as the Rycroft memo, would confirm that the meeting had taken place on July 23rd 2002 – eight months prior to the invasion.

The general public was never meant to know this. When the correspondence was leaked in 2005, it temporarily became a source of embarrassment for Blair. Within the memo lay a damning indictment of what became the dominant rationale for war. Justification would centre upon Iraqi possession of weapons of mass destruction (WMD) but it admitted "the case was thin". It went on: "Saddam was not threatening his neighbours, and his WMD capability was less than that of Libya, North Korea or Iran."

The contrast between this observation and the subsequent manner which the US and UK consistently articulated a case for war, using WMD as the primary justification, is stark. The whole episode can now be viewed as a foundational platform for the development of post-truth political behaviour.

A few months after the Rycroft memo, on September 25th 2002, UK newspapers published a story that would showcase the nature of the perceived threat from Saddam Hussein's Iraqi regime in unequivocal terms.

The Sun led with the headline "Brits 45 mins from doom". The Star ran with "Mad Saddam ready to attack: 45 minutes from chemical war". This followed up on the previous night's publication of the London Evening Standard which offered the simple headline "45 minutes from attack".

We all now know that the claims were demonstrably false. Post-invasion, there was a failure to find any tangible Iraqi WMD. And even if that hadn't been the case, the 45 minute claim was always false on the basis that it related to battlefield deployment.

We saw a similar pattern in the final phase of the Brexit referendum, when the official Leave campaign made the claim that £350m per week would be ploughed back into the NHS. This statement, which may have been perceived as a promise by a swaying electorate, never held any prospect of becoming a reality. But in the mind of Dominic Cummings, Vote Leave campaign director, it was enough to bring about the desired referendum outcome.

"If about 600,000 people – just over one per cent of registered voters – had decided differently, IN would have won," he said later. "If Boris, Gove, and Gisela had not supported us and picked up the baseball bat marked 'Turkey/NHS/£350 million' with five weeks to go, then 650,000 votes might have been lost."

Evidently, distorting the real truth to generate a specific required outcome was as successful in 2016 as it was in 2002.

The most iconic moment of the Iraq war arrived on April 9th in Firdos Square, central Baghdad. A large 39ft statue of Saddam Hussein was toppled by American soldiers surrounded by Iraqi citizens, who appeared to be celebrating raucously. The event visually showcased his rule  being overwhelmed by the force of Western democracy.

But look closer and this event is less simple than it appears. Events that day in Firdos Square had been effectively orchestrated by the US military. A complicit mainstream media would keep their cameras trained on the square while, elsewhere in Baghdad, the city burned.

Corporal Edward Chin, who hooked the chain of an M-88 armoured vehicle around the statue's head, adorned the US flag on it.  His superiors viewed this as a step too far and demanded it be removed.

The way in which symbolism and reality rub up against each other has become a defining theme in American ceremonies. Donald Trump's inauguration on January 20th 2017 demonstrated that the post-truth outlook was alive and well. In a striking parallel with Firdos Square, the nature of the crowd became a source of controversy. A series of exaggerated claims were advanced by then White House press secretary Sean Spicer as the new administration showed exactly how it intended to conduct political debate.

We are now drenched in post-truth. It surrounds our political debate every day, on both sides of the Atlantic. But it only really crystallised into existence in that short period between July 2002 and March 2003.

As the extent of the deception underpinning the basis for the Iraq War became more widely known, faith in politicians gradually eroded. By 2016, the political atmosphere was toxic. Reactionary outcomes such as Brexit and Trump's election are the organic outcome. It's a bleak anniversary, but an entirely logical one.

John Boland is an independent researcher currently working on a book that explores the political decision-making that led to the Iraq war.