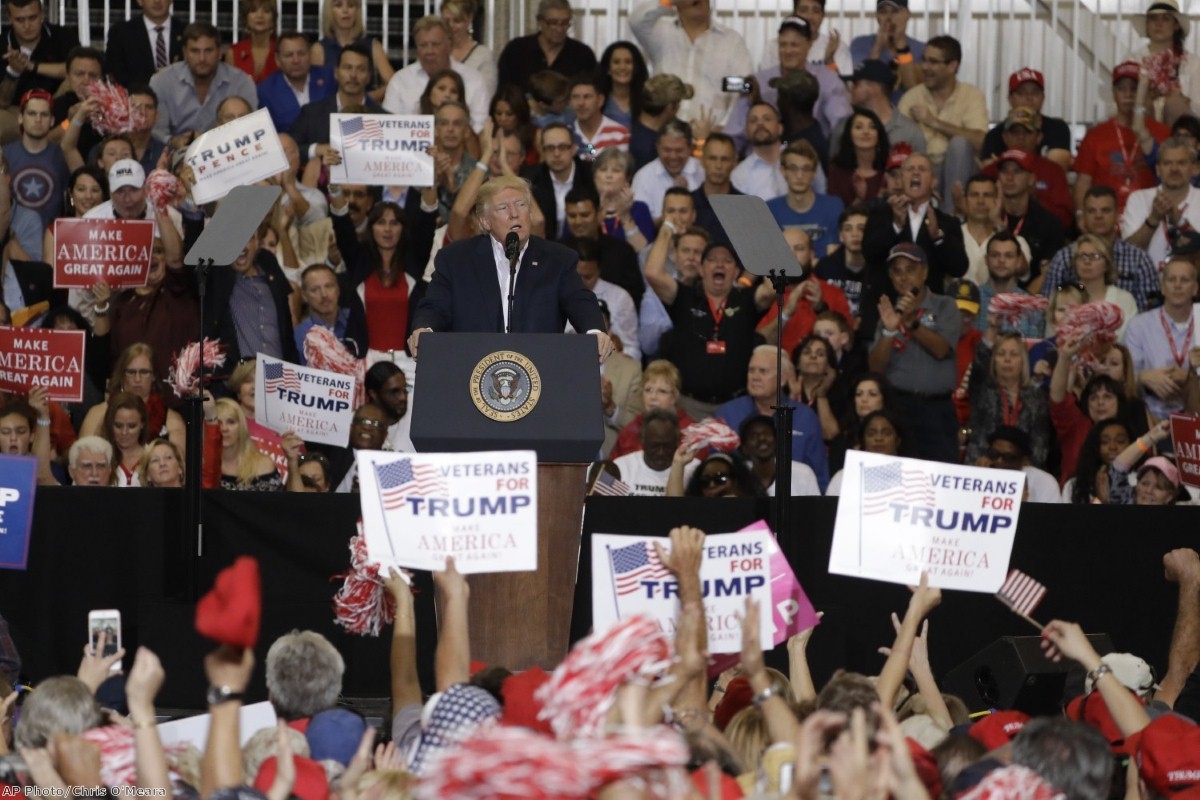 From Trump to nail bombs: How we normalised the far-right

For all the media focus on Islamic extremism, far-right terrorism represents an equally serious security threat to the UK. The most recent deadly terrorist attack on British soil was by a far-right extremist – the murder of Jo Cox by a far-right extremist Thomas Mair. A 2016 report from security thinktank Royal United Services Institute found that while 38% of lone-wolf terror attacks in Europe were linked to Islamic extremism, 33% were connected to right-wing extremism. Recent data from the National Police Chiefs Council revealed that the number of far-right referrals to deradicalisation programmes had increased by 74%.

The government, long blind to the threat from the far-right, has shown signs of waking up. In the past few months it banned the neo-Nazi group National Action and hired advertising giant M&C Saatchi to tackle far-right extremism online. These are welcome moves, but they're the equivalent of sticking a plaster on an open wound. It is easy to tackle extremism when it comes with the Nazi salute and openly racist language. It is much harder to recognise the extent to which far-right extremism has been normalised in British politics and society.

Far-right extremism is normalised because people refuse to treat it as deviance. Look at the starkly different way the British government and media treat far-right extremism versus how they treat Islamic extremism. Lee Rigby, Mohammed Saleem, and Jo Cox all lost their lives in acts of terrorism. Rigby's murderers were labelled as Islamic extremists and treated as deviants. The murders of Saleem and Cox were perpetrated by far-right terrorists, and though some in the media and the Crown Prosecution Service did label the attackers as terrorists, the government was silent. This failure to mark far-right extremism as a serious deviance is a sign of an extensive process of normalisation of extremist behaviour and beliefs.

Rabid anti-immigration sentiment has become part of everyday life in Britain. Criticism of immigration is not in itself a sign of extremism. But anti-immigrant sentiment which strips the migrant of their humanity is. This happens through the framing of migrants as permanent deviants: they are very often described as criminal and abusers, ready to steal jobs, rape, and exploit the NHS. And it is this dehumanising anti-immigrant narrative which is rampant in the media, especially in popular tabloids such as the Daily Mail and the Sun. It was the dehumanisation of migrants that led extremist Ryan McGee to build a nailbomb and vow to drag every last immigrant to hell. It is this dehumanisation that is rampant in far-right forums calling for the deportation of every migrant in British soil and rejoicing at every report of migrant deaths in the Mediterranean.

It is this same dehumanisation which is present in government policy such as degrading immigration detention, the scrapping of funding for life-saving search and rescue operations in the Mediterranean, and the abandonment of the Dubs amendment in protection of child refugees. British immigration policy relies on the framing of migrants' lives as being less valuable – and less worthy of protection –indicating a normalisation of a dangerous form of anti-immigrant sentiment.

We saw more evidence of the normalisation of far-right extremism during the lead-up and fall-out from Brexit. General euroscepticism and a desire to leave the EU is obviously not a sign of extremism. But the Brexit vote featured very little reasoned opposition to the EU. Even the promises supposedly founded on traditional economic arguments, such as the NHS promise, have unravelled since the referendum. Rather, most of the narrative surrounding the Brexit campaign was predicated on uncritical nationalism and anti-immigrant sentiment, from Farage's infamous Breaking Point poster to promises to curb free-movement. The dehumanising nature of that debate was reflected in the spike in hate crimes after the referendum, with campaigners and police forces worried about a further increase in violence once Article 50 is triggered.

Hate crimes are dehumanising. They rely on stripping people of their individuality, on prioritising – and despising – the one characteristic which marks them as 'Other'. The more we attach deviance to the Other, the more we normalise dangerous behaviour towards them from the dominant group. The failure of the government to guarantee the rights of European migrants is in itself an act of dehumanisation. EU migrants are now merely pawns in a negotiating strategy, rather than human beings with lives and rights.

The British prime minister holding hands with the head of a white nationalist administration sends a powerful message about the normalisation of extremism at the highest levels of the UK government. Donald Trump's White House is staffed at the highest level with white nationalists who believe that immigration is a form of foreign invasion akin to war.

Trump's Muslim ban has been decried worldwide – but not by Theresa May. Not only has Trump been invited for a state visit, but the government is going out of its way to protect the president from criticism during it. This has the effect of framing Trump not as a deviant from whom the people need protection, but as someone who needs to be protected from the people. We're just normalising his behaviour, but endorsing it. In this climate, objections to Trump's visit, such as the one voiced by John Bercow, are seen as political acts lacking 'neutrality'.

Extremism now has the guise of neutrality. Neutrality therefore means tacit support of an avowedly misogynistic and racist administration whose president openly attacks the judiciary. Neutrality means tarnishing independent judges as enemies of the people for upholding the law. Neutrality means being told that questioning the direction of Brexit is akin to treason. Neutrality means being uncritical, unquestioning, and obediently allowing those in power to be unaccountable. Neutrality means conforming to an extremist view of British society, where extremist deviance is only what those perceived as the Other do, never what 'we' do. After all, how can it be extremism if it is normal?

Dr Maria W. Norris is an expert on terrorism and an LSE 100 Fellow. She tweets as @MariaWNorris