What is tobacco duty?

Properly referred to as Tobacco Products Duty, but more widely known by its shortened name, Tobacco Duty is an excise duty charged on purchases of tobacco products.

With less people smoking and the vaping industry growing, the tax revenue raised by cigarette excise duty is now decreasing. The revenues being raised have already dropped from a peak of £9.2 billion in 2018/19.

The rate of excise tax is adjusted annually by the Chancellor of the Exchequer as part of the Budget, with changes coming into force that day under the terms of the Provisional Collection of Taxes Act 1968. 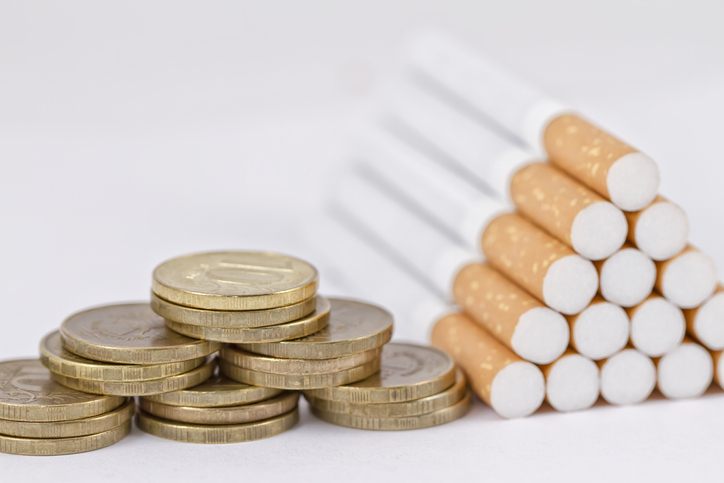 Around 80% of the price of a packet of cigarettes is now made up of tax.

Many smokers resent the high and regularly rising prices that they have to pay for tobacco products. Nonetheless, the principle of government taxing tobacco heavily, both as a source of revenue and to provide a price-based deterrent to smoking, is long standing.

The political debate around this issue often involves the following aspects.

Cigarette duty as a public health tool
Taxation is said to be a key policy weapon to deter cigarette smoking. Its success in doing so is evidenced by figures which show that the number of smokers has dropped from approximately 30% of the population in the year 2000, to under 15% in 2020. The increasing duty on cigarettes during that period is said to have supported this decline. In 2016, tobacco was said to be 27 per cent less affordable than it was in 2006.

Those supporting an ongoing increase in tobacco tax point to the dangers involved in smoking.

Cigarette consumption continues to be the leading cause of preventable deaths in the UK. In 2015, 16% of all deaths in people aged 35 or over in England (79,100 deaths) were estimated to be attributable to smoking. Public Health England further estimate that 474,000 hospital admissions a year in England are directly attributable to a tobacco product, a figure which represents 4% of all hospital admissions.

Cigarette taxes as a revenue generator for the taxman
The Excise duty on smoking raises over £8.8 billion per year for the Exchequer. In the years after the 2020/21 Coronavirus pandemic, it is argued that cigarette tax revenue is money that the government desperately needs in order to fund public services.

Problems with cigarette smuggling
Those critical of the current rates of duty levied on cigarettes in recent years point to the problems it creates with smuggling.

The perceived problems with smuggling are not new. In 2004, it was widely accepted that around 25% of all cigarettes and as much as 75% of hand-rolling tobacco consumed in the UK were non-UK duty paid. Independent retailers put the cost to them of the trade in untaxed cigarettes at £1.2 billion per annum in sales. In 1999, a study showed that smuggling cost the Treasury £2.5 billion in lost revenue.

HMRC’s estimated the illicit trade to account for 35% of hand-rolling tobacco consumption in 2014-15 to amount 7% of cigarette consumption. It is said that cigarette tax levels act as an incentive to avoid legitimate tobacco products, and thus risk driving smokers to less safe alternatives.

It is pointed out how Denmark has considerably reduced its rates of duty on cigarettes in an attempt to address smuggling.

A regressive tax on a small proportion of the population
Academic research published in the Journal of Public Health, has found smoking rates were four times higher among the most disadvantaged social groups than the most affluent.   As such, taxpayers groups argue that tobacco duties fall disproportionately on lower incomes, and that this is a particularly regressive tax.

At £6.40 per packet of cigarettes, tobacco duty can account for a large proportion of household income, equating to a £1,000 per year for a household smoking three packets of cigarettes per week.  The tax thus impacts on the financial well being of many who are least set up to do so.

The fact that tobacco is considered so addictive is said to compound the issue. It is said that the annual price rise on cigarettes price is also far from guaranteed to stop smoking.

Smokers and a reduced burden on the NHS
The Tax Payers Alliance pressure group has also attacked the argument that smokers should be taxed because of the costs brought by smoking to the NHS.

They argue that smokers who do suffer major health problems due to smoking are more likely to die prematurely, reducing expenditure on state pensions and other age-related benefits.

A premature death resulting from smoking is presented as a cost from smoking, but it is claimed this is a cost ultimately borne by the individual smoker, and not in the end by other taxpayers.

Early Years
Tobacco Duty is perhaps the oldest excise duty in existence. It dates back to around 1660, with the introduction of tobacco to Britain from the New World.

It has long been subject to political vicissitudes: James I dramatically increased the rate of duty from 2d per pound under the late Tudors to 6s 8d, on account of his dislike of the “obnoxious weed”. Rates also soared during the Great Plague of the 17th Century, when tobacco smoke was believed to afford protection.

Although domestic production of tobacco has never been prolific, it was formally banned as a threat to Royal revenues coming in from the plantations of Virginia. As such, the Tobacco Duty regime has almost from the start been in conflict with smuggling.

Smuggling was so rife during the 18th Century that by 1815, duty stood at 400 per cent of the actual value of tobacco. Adulteration of tobacco products with other material was also a serious concern. In response to this problem, a laboratory was set up in 1842 by the Excise Board. This body, which was a precursor to the Department of the Government Chemist, conducted research which led to strict conditions on additives to tobacco products adopted in 1863.

Cigarettes first began to be consumed on a large scale in the UK after 1854 when the first factory was opened. Production took off after 1884 with the mechanisation of the process in the USA.
In the 20th Century, as before, Tobacco Duty has been seen as a ready source of revenue for governments, and it has risen accordingly. In 1947, concerns about the level of duty saw the introduction of “tobacco tokens” for pensioners struggling to pay for their habits, but this system only lasted for 11 years.

It was only from around 1950 that the health effects of tobacco came to be understood. Indeed, prior to that time it was actually assumed to be a healthy activity. From that time, governments began to justify increasing duties as a public health measure.

Recent rises in cigarette tax
On coming to power in 1997 the Labour government promised to annually increase the duty rate on tobacco from 3 per cent to 5 per cent.

In 2010 the Labour Government announced that cigarette excise tax would be increased each year by 2% above inflation each year.

The Coalition, and later solely Conservative Government, adopted this approach throughout the 2010s.

Smoking Rates – In 2019, the proportion of current smokers in the UK was 14.1%, which equates to around 6.9 million of the population – Source Office of National Statistics.

“Smoking remains the biggest cause of preventable illness and premature death in the UK. There is clear evidence that increasing the cost of tobacco encourages smokers to quit and discourages young people from taking it up.” – Chancellor George Osborne, 2012

“Reducing the affordability of tobacco products through taxation is widely acknowledged to be effective in reducing smoking prevalence” – Treasury Minister, Damian Hinds, 2016