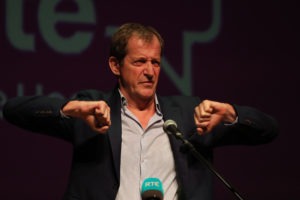 Shortly after his victory in the 1994 Labour Party leadership election, Tony Blair appointed Alastair Campbell as his Press Secretary. Among his many contributions during the period 1994-1997, Campbell was said to have coined the name ‘New Labour’; drafted the speech that led to the symbolic rewriting of Clause IV in the Labour Party constitution; and worked to court Rupert Murdoch and persuade the Sun newspaper to support Labour in the 1997 General Election. For all this, Tony Blair later labeled Campbell ‘a genius‘. Alongside Peter Mandelson, Campbell was pivotal in organizing the party’s 1997 General Election campaign.

By the time Labour won a landslide victory in the 1997 General Election, Campbell was well-known as a master ‘spin-doctor’. Campbell continued to be very influential as 10 Downing Street’s Director of Communications. Notably Campbell was a key figure in the government’s handling of the death of Princess Diana, helping coin the phrase the ‘People’s Princess’.

Within Downing Street, Mr Campbell quickly assumed a role more beyond that of managing the media for the Prime Minister, having in 1998 played a key role in the negations that led to the Good Friday Agreement in Northern Ireland. However, Campbell was not always so successful in applying his skills. He is alleged to have mishandled Robin Cook’s resignation, and Campbell failed to effectively manage the media response to the news of Bernie Ecclestone’s controversial £1 million donation to the Labour Party.

In 2003 Campbell left his position as Downing Street Director of Communications, but has hardly left politics. He worked as Campaign Director for Labour’s winning 2005 election campaign, and acted as an advisor to Gordon Brown and Ed Miliband during their roles as PM and leaders of the Labour Party respectively. In 2014, Campbell joined GQ and has been an interviewer for the magazine ever since. Campbell has also served as the editor-at-large of The New European newspaper, a position he held since 2017.

Campbell has been reported as having provided advice to Emmanuel Macron’s victorious En Marche party in relation to the successful 2017 French Presidential election campaign. In a subsequent article for The New European, Campbell labeled Macron ‘the real heir to Tony Blair’.

After graduating from Cambridge University with a 2:1 in French and German, Campbell held a variety of journalistic jobs. One such job apparently saw him write adult content for Forum Magazine under the pseudonym Riverea Gigolo. In 1982, Campbell was employed at the London Office of the Daily Mirror, then the only major Labour-supporting paper. Campbell later worked as a political journalist at the Today newspaper before rising to become the Political Editor of the Mirror. At certain times during his journalistic career, Campbell is said to have had battles with alcoholism.

In the period before the second Gulf War, Alastair Campbell was said to have been involved in the drawing up of an Iraq Dossier (commonly referred to as the ‘Dodgy Dossier’). It has been suggested that this dossier overstated intelligence findings and in particular, the time that it might have taken for Iraq to acquire nuclear weapons. Campbell has always strongly denied these claims.

Campbell has been very open about his mental health struggles and battles with depression both in and out of office. As a consultant strategist and ambassador for Time to Change, Campbell has encouraged those struggling with their mental health to seek clinical help. Supporting mental health charities, Campbell has argued that for too long mental illness has been something that people do not want to talk about, and pretending it is not there, leads to ‘taboo, stigma and discrimination‘.

In 2019 he was appointed Global Ambassador to Australians for Mental Health, and he was the focus of the 2008 BBC mental health documentary ‘Cracking Up’.

Campbell was a very vocal opponent of Brexit, and he became an advisor to the People’s Vote campaign – the organization demanding a second public vote on the issue. Immediately after the 2016 referendum, Campbell declared the Brexit result to be ‘the worst decision Britain has made in my lifetime’.

On May 2019, Campbell was thrown out of the Labour Party for stating that he would be voting for the Liberal Democrats in that year’s European elections. Campbell insisted this was simply a protest vote – he was a prominent critic of Labour/Corbyn’s Brexit strategy.

How old is Alastair Campbell

Campbell met his partner, Fiona Millar, while he was working for the Tavistock Times in the late 1980s. Fiona is known for her campaigning against Grammar Schools. The couple never married and have 3 children together.

Alistair Campbell – Things you may not know

He plays the bagpipes in his spare time

Campbell is one of a few famous bagpipers out there. He has been known to show off his bagpipe talents at concerts including one in Glasgow in 2019.

He is a triathlete

Campbell has often appeared in endurance running events, raising money for charity along the way. He raised over half a million pounds running the London Marathon in 2003. Alongside being a triathlete and marathon runner, in his 60s Campbell took up cold water swimming.

Campbell is also a staunch supporter of Burnley Football Club. Since age 4, Campbell has regularly attended matches-both home and away.