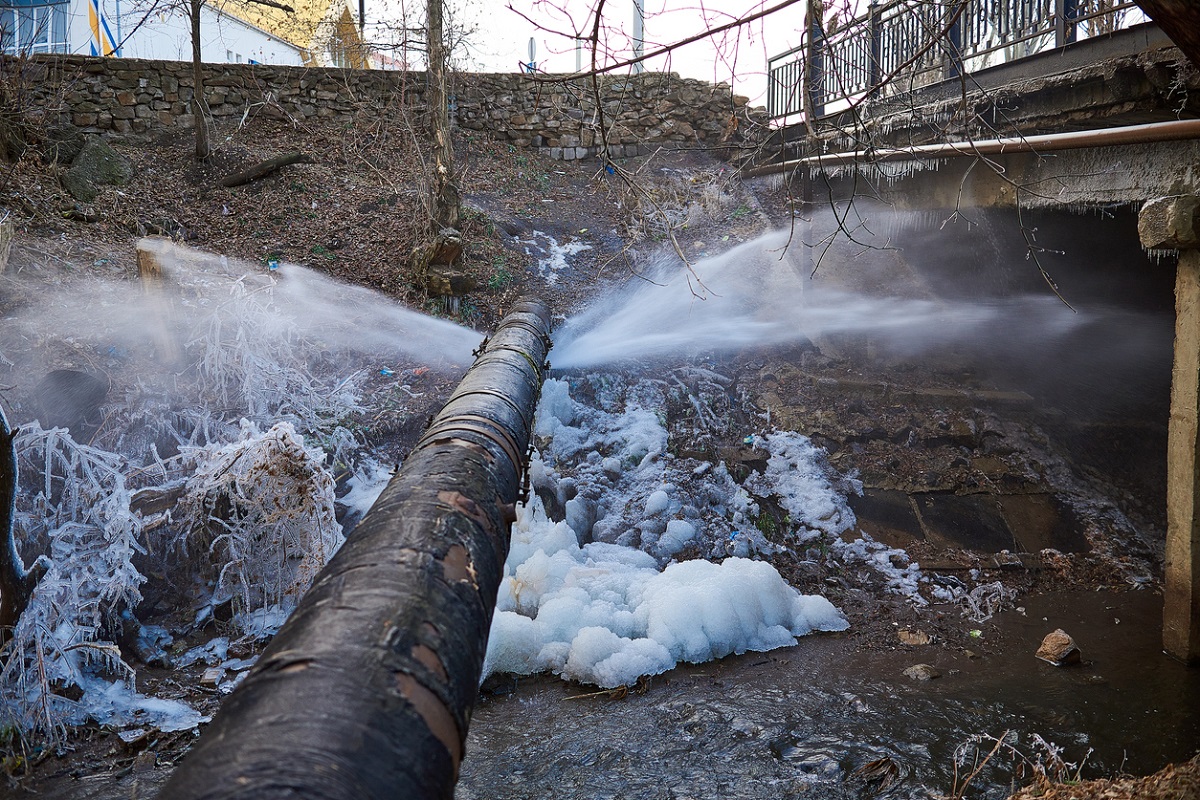 Anatoli Malyuk and his team of fifteen fitters are responsible for the maintenance of 300 kilometres of water pipeline.

That pipeline criss-crosses the frontline of a seven-year struggle in the Donbas region of eastern Ukraine between government forces and Russian-backed separatists.

The 50-year-old foreman has been in his role for 25 years. But today he faces the threats of gunfire, landmines, and shelling in going about the daily work of ensuring people on both sides have clean drinking water.

Water is being used as a weapon of war on Europe’s eastern edge. As tensions between Ukraine and Russia threaten to escalate to new levels, civilians are paying the price in and around the warzone.

Nine of Anatoli’s colleagues at Voda Donbasu, the Ukrainian state water authority, have been killed and 26 injured in the last seven years in the course of duty – often repairing pipes with wooden stakes, due to a lack of equipment and resources.

The pipeline has been damaged by fighting 390 times in that time. Meanwhile the main water treatment plant in separatist-controlled Donetsk has come under repeated attack.

If it should be destroyed, aid agencies say that they would not be able to supply the three million people who would be affected. That, in turn, would lead to a new refugee crisis.

Already, many people in the region are living without drinkable running water.

The town of Marinka is luckier than some. It can still be supplied with untreated, non-potable water directly from nearby reservoirs, while it depends on shipments by lorry for drinking water. Children at the local kindergarten quickly got used to telling the difference between the two types. The latter is strictly rationed.

Nevertheless, proximity to the frontline means that danger is never far away.

“Of course, you feel scared, no matter what. Fear is real. You feel it all the time,” says Marinka nursery teacher Viktoriia Antipenko, whose neighbours were hit by shrapnel while gardening.

A little further north though, in Krasnohorivka, things are even worse. There is no water or gas supply. Just one kilometre from the frontline, the town is regularly hit by small arms and artillery fire. Signs along the surrounding roads warn of mines.

Yet even here, people continue to live and work.

Hospital director Mykola Slysarenko keeps the local hospital open, despite a chronic lack of staff, serious mortar damage to the roof (inflicted four years ago), and the prospect of being shelled again at any moment.

“In 2015 and 2017, the hospital was destroyed. Every single vehicle in the garages was damaged by the fire,” Mykola explains.

“Yeah, but life goes on. We’ll keep on living.”

These are just some of the remarkable stories of human courage and endurance uncovered by Antje Büll in “Re: Ukraine Water Wars”.

Water has been at the heart of the conflict between Russia and Ukraine for years now. 2.3 million more people in the Crimea face regular water shortages, as a result of the damming of the Crimean canal in 2014. Agriculture in the once-fertile region has been reduced to virtually nothing.

The water war in eastern Ukraine is just one of the stories focused on in the latest series of Re: European Stories, from ARTE.tv – the European culture channel.

We bring you inside the lives of people across the continent, affected by the issues that make the headlines – and some that don’t.

Whether it’s illegal waste disposal in Poland, rising gun violence in Sweden, wood shortages in Germany, or the promise and dangers of CBD, ARTE.tv curates the finest documentaries and reportage to bring you Europe in all its diversity of viewpoints.

At the start of December 2021, 100,000 Russian troops stood massed near the Ukrainian border. Tensions are high and rising. In the Donbas, confrontations between government forces and separatists take place on a daily basis. The human cost of escalation could have continent-wide implications.

As for the maintenance crews of Voda Donbasu, the daily journeys to and from the frontline to dig up and plug damaged pipes – often under fire – goes on.

“If they ever came here, we would still keep on working on the water pipes,” says Anatoli Malyuk.

But he adds: “I would fight for my Ukraine. That’s just how it is. I won’t abandon my country.”

For Ukraine Water Wars and more stories from around Europe, visit ARTE Regards.