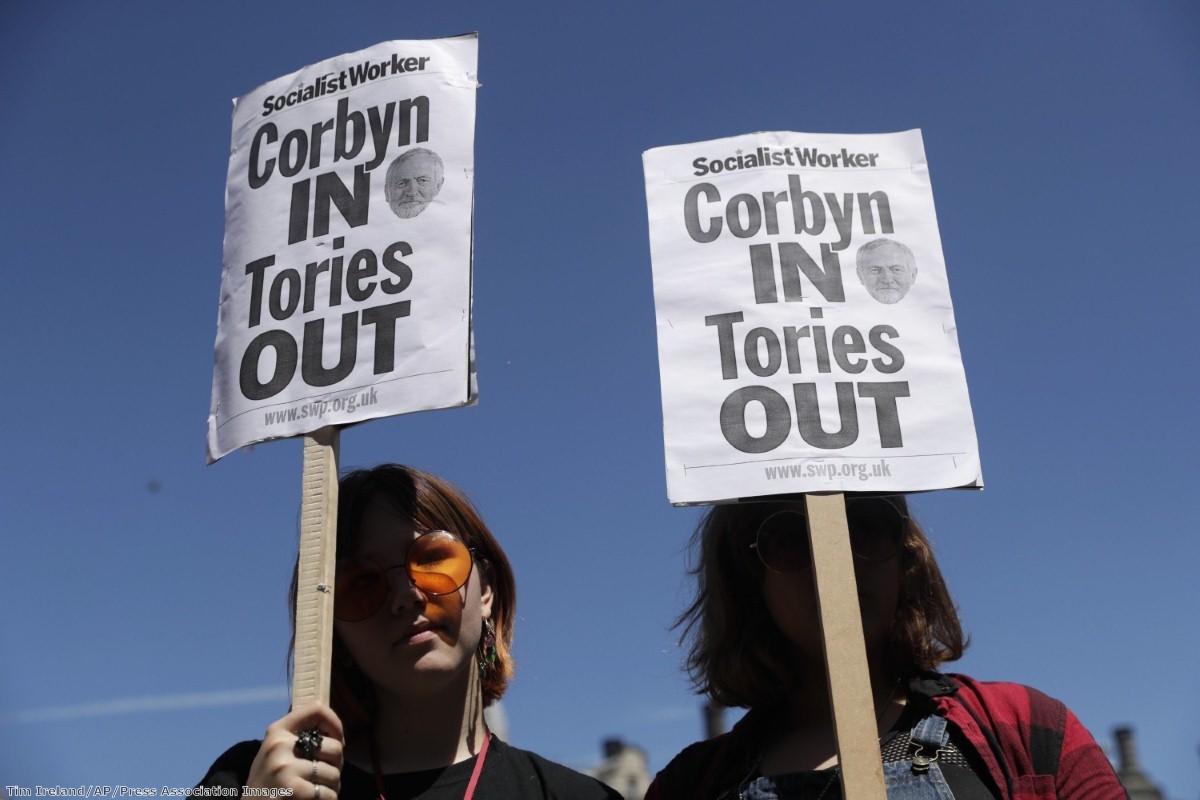 Britain is on the brink of a national political crisis

First, the good news. The political drive for austerity lies in tatters. Thatcherism is bankrupt. The toxic power of the Tory press has been shattered. Tory dreams of a landslide victory are dead. The Labour leadership question is settled for the foreseeable future.

That's a fair bit of good news. But here it comes to a crashing halt.

The country is long-term divided – there hasn't been a convincing majority in a general election since 2005, four elections ago. The Tories' reputation remains toxic for millions post-Thatcher, and Brexit has toxified it in large parts of London and other Remain-heavy cities. Labour's reputation remains in the mud post-crash for millions of others.

But it is Brexit that makes this all critical. Talks are due to begin in barely a week – and British politics has never been as unstable as it is now.

Everyone is claiming victory from a result in which nobody won. Remainers think this is a mandate for soft Brexit – a mandate to stay in the single market, or even the EU itself, in an election where at least 83% of people voted for parties committed to quitting both.

Labour think this is a mandate for a progressive coalition comprising fully five parties that even between them wouldn't have the numbers to govern, and in which Labour itself is split over the question of freedom of movement – on which single market membership almost certainly turns.

A party leader would not normally survive as catastrophic a blow to their credibility as Theresa May has just brought upon herself. The imminence of Brexit talks is all that keeps her in a job – there is no unifying elder statesman the parliamentary Conservative party could rally behind, such as William Hague or even Sir George Young. Philip Hammond is too anti-Brexit for MPs. Boris Johnson is too much of a clown. The country does not have time to sit through another round of Tory civil war in a leadership contest.

Is there widespread appetite for another general election, beyond Labour's support base? Labour has a raft of seemingly slam-dunk marginals whenever the next election is  – but they did in 2015 too. Nobody can say what voters will choose to do – not anymore.

It's easy to say that the start of Article 50 talks could be delayed. But that's not what counts – what really matters is when they end. To delay the start of talks without pushing back the entire two-year timescale – which we are already nearly three months into – will further narrow the window to reach a deal with Brussels.

As for that deal, the Conservatives are committed to leaving the single market and the customs union, with the huge economic hit that entails. Labour managed to neuter both the Brexit question and the immigration issue simply by facing different ways on them.

That's not to say Labour's Brexit policy is the same as the Tories' – the party promised not to walk away from talks as May had threatened, guaranteed the right to remain of EU nationals in the UK, and made a variety of detailed commitments on workers' rights, standards and agreements currently wrapped in EU membership. But on free movement and single market membership, Labour whispered 'leave' and hoped only Leave voters would hear.

As a result people heard whatever they wanted to hear. The fractured electorate that so threatened to undermine Labour's future united under a banner that said everything and nothing. Leave voters accepted Labour's assurances that it was committed to Brexit, and prioritised other issues; Remain voters convinced themselves it was all a tactful lie, or that Labour's stance differed meaningfully from the Tories' on the key economic questions of Brexit.

Britain's hung parliament, its discredited prime minister and the messy deal with the DUP that the Tories are heading towards have all convinced ardent Remainers that the country's attitudes to Brexit and immigration have suddenly changed. They haven't. Labour's calculated vagueness secured it the votes of Leave voters 'coming home' to the party and opposing austerity, as well as middle class Remainers in London who convinced themselves that Labour was backing 'soft' Brexit.

But fundamentally, those divisions are still there. They were hidden because the Brexit election was not, in the end, about Brexit – neither May nor Corbyn were keen to discuss the details of it, and the Lib Dems failed to gain traction as they faltered in the polls. But unless the EU allows us to meaningfully curtail free movement while staying in the single market, or economic strife at the prospect of hard Brexit persuades the country to change its mind on immigration, the crunch point has been delayed, not averted. A cross-party national commission on Brexit – let's be blunt, a national unity government in disguise – would be as likely to paint Westminster as an elite imposing its will on the people as it would be to actually unite the country.

Fantasies of a progressive alliance are a nonsense while the parliamentary numbers aren't there. The best that can be cobbled together would be for Tory MPs to ignore Amber Rudd's wafer thin constituency majority and back her as May's summer replacement. That assumes a level of Tory unity that does not currently exist.

A deal with the DUP looks unavoidable. They hold the balance of power – which means they hold power. Neither the Tories nor Labour would have a working majority without them. We don't yet know what is in the Tory-DUP deal, but it is at least set to be a limited confidence and supply agreement, not a repugnant formal coalition. The terms of an agreement may yet leave us retching. The risk to Northern Irish power sharing is real. This is the wretched mess Britain is in.

Meanwhile, Philip Hammond is now untouchable as chancellor. May wanted to sack him to allow her to ease off austerity – instead austerity's unpopularity has kept austerity's leading cabinet advocate in his post. Such is life. Logic dictates the austerity drive must now end – but logic does not reign in this land.

Logic similarly dictates that May must surely abandon her domestic obsessions – grammar schools in particular. In fact, the entire domestic political agenda might end up in deep freeze for two years. But we know from the immigration target that May is a monomaniac on certain issues, tin eared to all other voices.

How long can this shambles drag on for? May must be on borrowed time, but the government's survival is anyone's guess. The Tories know the odds are stacked against them in another general election. The DUP would be loath to see Corbyn take office – as would every Tory MP from Ken Clarke to John Redwood. People learn discipline on the edge of an abyss.

Britain is as divided as it was two months ago, only now less stable and even less credible. We are a political basket case and international laughing stock, heading towards an economic cliff with no good way forward and no way back. People are celebrating. There is little to celebrate.