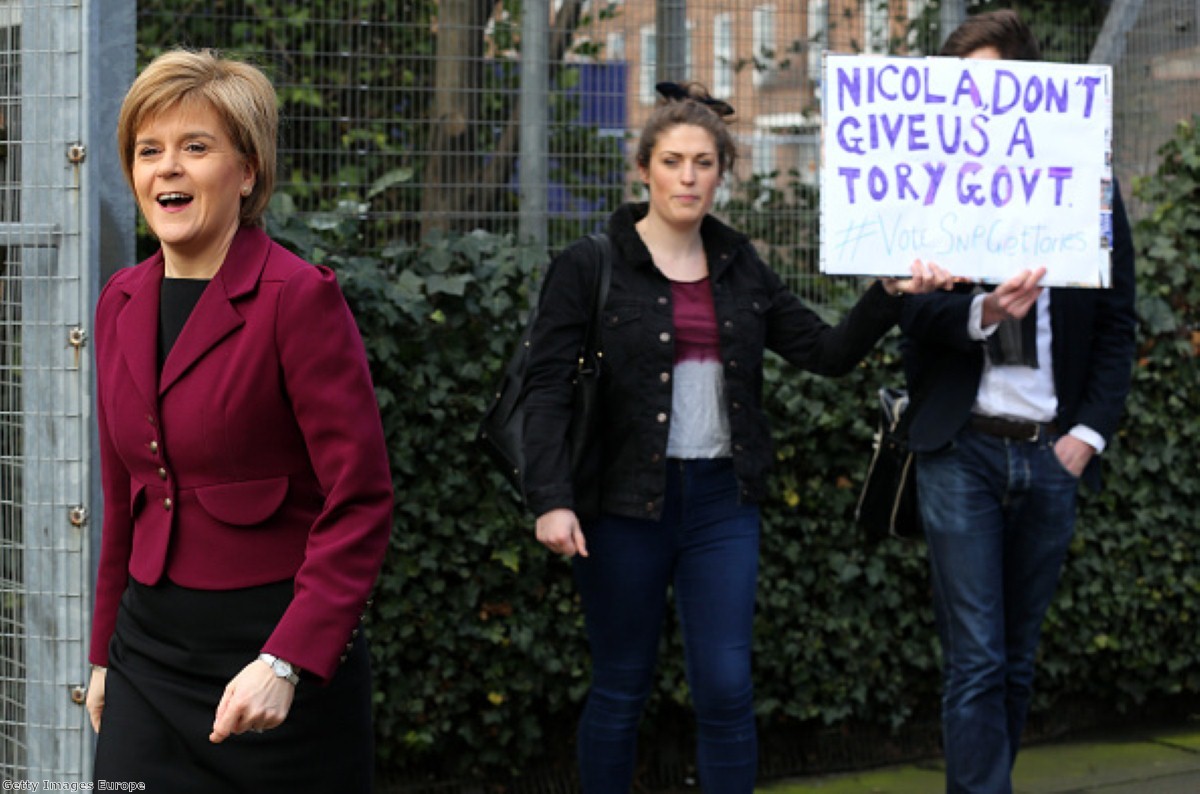 "It happened here first", or so the chairman put it as proceedings drew to a close yesterday evening. "It" was the first Scottish leaders’ debate of the 2015 General Election, and "here" was the Queen Margaret Union at Glasgow University. The event was also notable for pitting the relatively new First Minister and SNP leader Nicola Sturgeon against the relatively new Scottish Labour leader Jim Murphy for the first time.

Proceedings were disappointingly good-natured, but also revealing. The quartet (the others being Scottish Tory leader Ruth Davidson and Scottish Liberal Democrat leader Willie Rennie) all stressed the enormity of the forthcoming election ("make Scotland’s voice heard" said Nicola; "the most important election in Scotland in my lifetime" added Murphy), while slowly setting out their debating points, most of which would already be familiar to a Scottish audience.

The austerity claxon sounded early on. Sturgeon said it had "completely and comprehensively" failed, even on its own terms, and Murphy agreed, although the First Minister was keen to highlight that Scottish Labour MPs had recently "trooped" through the Westminster lobbies in support of more (not true, said Murphy). Ruth Davidson said it was painful but necessary, while Willie Rennie argued the SNP and Labour were “denying reality” about the need to reduce the debt and deficit.

More interesting were Labour and the SNP’s proposed alternatives. As the Institute for Fiscal Studies recently observed, little actually separates Labour and the SNP on this point (both want "better" austerity, i.e. a bit more public spending in the years ahead while still tackling the deficit), but presentationally Sturgeon has clearly done a more effective job than Labour of depicting her proposals as "ending" austerity rather than mitigating it.

Strikingly, when it came to tax increases Jim Murphy was upfront in wanting bankers, higher earners and mansion dwellers to pay more; Willie Rennie also said his party would target pensions relief and bankers, an "80/20" split between spending cuts and tax rises. By contrast, Sturgeon did her best to avoid mentioning tax at all, only saying under questioning that she didn’t "particularly disagree" with Murphy on the mansion tax and 50p upper rate (bankers weren’t mentioned), but she believed Labour were “exaggerating” the amount of revenue such changes would produce.

That might be true, but when pushed as to how she would tackle austerity, the SNP leader fell back on a long-standing (and incredibly vague) nostrum that her party would "grow our way out of the deficit" by investing in skills, education and infrastructure, which in turn would "grow the tax base"  and therefore increase revenue. Sturgeon made it all sound very easy, and if Murphy was guilty of exaggeration then she was too.

Nevertheless there was a clear divide between Scotland's two largest parties when it came to tax: Murphy was unequivocally for higher tax while Sturgeon appeared unconvinced. A line uttered by the Scottish Labour leader – "higher taxes on those who have the most" – was not something echoed by the First Minister yesterday evening, or indeed at any point since she succeeded Alex Salmond (who shared her reticence on such questions) as First Minister.

Yet as any observer of Scottish politics will know, if the average voter in Scotland is asked to identify the most left-wing party, most would reply "the SNP" rather than "Labour". And no matter how often Jim Murphy emphasises his tax-raising agenda (and to his credit he’s linked specific tax increases with specific spending commitments), no one appears to be listening. The "progressive" mantle (a much misused word) still rests with the SNP, even though it’s reticent about more progressive taxation (although the Scottish Government has recently replaced Stamp Duty with a moderately more progressive system).

There was a similar gulf between rhetoric and reality when it came to the Barnett Formula, under the spotlight earlier this week due to the annual spat over GERS figures (basically a balance sheet listing Scotland’s tax contribution and expenditure). On this point Jim Murphy was robust while Sturgeon fell back on what I've heard one journalist call "magic growth beans" to explain how she’d plug the clear gap between tax raised and money spent. She also claimed that the real risk to Barnett came from the Unionist parties. "The only person," responded Willie Rennie, "who wants to get rid of Barnett is Nicola Sturgeon.”"

After an outbreak of (relative) consensus over zero-hour contracts (they’re bad), Ruth Davidson and Jim Murphy had an entertaining if rather pointy-headed spat about welfare powers and which were to be devolved (or not) under the recent recommendations from the Smith Commission. Interestingly, Murphy declared that he didn’t "want a centralized Welfare State" but for "every city" in Scotland (or did he mean the UK?) to "design its own". Radical stuff, and a significant departure from referendum-era Labour rhetoric emphasizing precisely the opposite.

There was inevitable speculation as to the likely form of administration after May 7. Willie Rennie said it would be "difficult to put the SNP in charge of a country they want to break up", while Jim Murphy acknowledged he faced an "uphill struggle" to retain all his party’s MPs while reiterating (to a cry of "liar!" from the audience) that the "largest party forms the government". He’s right, or at least that’s been the case since the 1930s, but Sturgeon also scored a hit by reminding the Scottish Labour leader that he’d supported Gordon Brown’s right to try and form a coalition in 2010 despite the Tories being the biggest party.

The First Minister raised the prospect of the SNP being able to help "lock the Tories out of government" via a "progressive alliance", although when she appeared to suggest that recent Conservative attacks on the prospect of her party supporting a Labour government undermined its Unionist pitch (and Scotland as a valued part of the UK) during the referendum, Willie Rennie accused her of conflating the SNP with Scotland: "It shows how conceited they have become."

Sturgeon, meanwhile, was strong and unequivocal about her opposition to Trident renewal, declaring her unilateralism in contrast to her more multilateralist Unionist opponents. Even if they didn’t accept the moral case against it, she added, the cost alone ought to count against it. Was it a red line for post-election negotiations, asked Murphy? "Yes," said the SNP leader simply. All the Scottish Labour leader could add was: "You can’t dis-invent this technology."

Surprisingly, Nicola Sturgeon wriggled a bit when asked if another independence referendum would form part of the SNP’s manifesto for next year’s Scottish Parliament elections (“you’ll need to wait and see”), and when Jim Murphy sarcastically quipped that “as we know” the recent referendum had settled the question “for a generation” (he was quoting Sturgeon), the First Minister simply raised her eyebrows with faux surprise.

There were some odd moments, for example when the Scottish Labour leader attempted to out-nationalist his chief opponent: the Prime Minister, he said, might have a "Scottish-sounding surname", but he was "entirely out of touch with the nation of his ancestors". Beyond that, the three Unionist party leaders diligently avoided name-checking their respective UK leaders, a silent acknowledgement of how unpopular they are north of the border.

Was there a clear winner? Not really. The usually slick Nicola Sturgeon wasn’t on top form, and in spite of some lame attempts at humour Jim Murphy eventually got into his stride. Ruth Davidson was probably the most human of the four, while Willie Rennie was contrite in defending his party’s coalition record. As recently announced by Scottish commercial broadcaster STV, the quartet (why no Green?) will joust again in Edinburgh on 7 April.