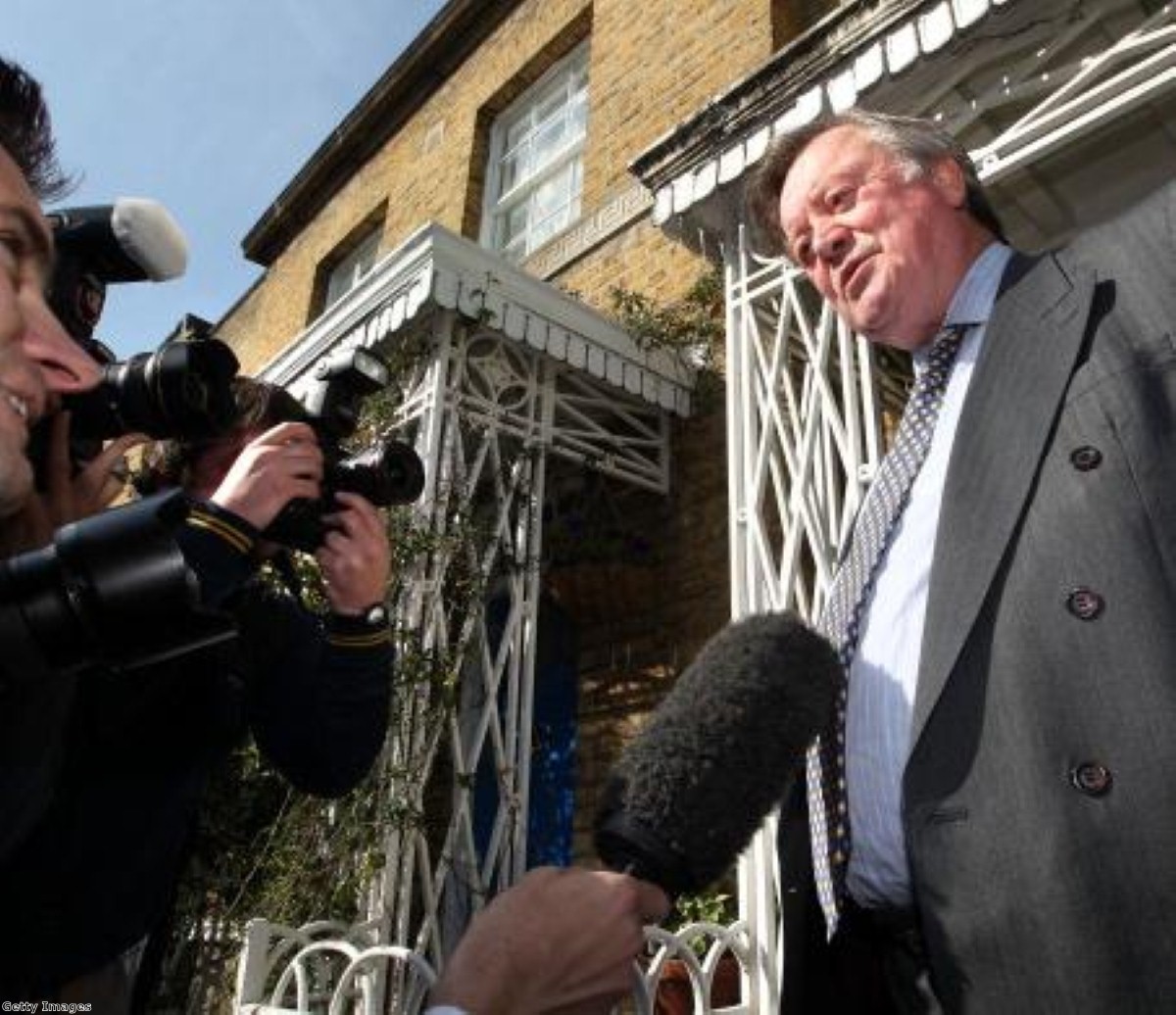 Politicians seem incapable of getting through 12 months without putting their foot in it. But this year's list of our top ten gaffes is remarkable in one regard: it doesn't contain a mistake by a single member of the opposition. Have we missed something? Let us know on Twitter @politics_co_uk. Here's our pick of the worst blunders of 2011:

Everyone, even leaders of the free world, get nervous on some occasions. While visiting HM the Queen at Buckingham Palace, Barack Obama must, surely, have been hoping more sorely than usual that nothing would go wrong.

Unfortunately, it did. A mix-up between himself and the orchestra at the royal banquet left the president blurting out a rather pretentious toast over the top of – that's right! – the national anthem. His failure to shut up once God Save The Queen began was, by any standard, a diplomatic gaffe of the highest order.

The Queen's look of surprise is worth the entry price alone. But it is nothing compared to the grin on the visage of the Duke of Edinburgh, whose heroic efforts at not laughing out loud have made him the national hero he is today.

Every prime minister expects a fair amount of grumpiness from his backbenchers. In the coalition government David Cameron has come to expect it. But even he must have been surprised when right-winger Patrick Mercer appeared in the newspapers calling his party leader an "a*se" and "the worst politician in British history since William Gladstone".

Eesh! That's a long way from the steadfast party loyalty Mercer is supposed to be offering. His private opinions had been taped by the People newspaper at a party in London, and were now on display for the entire Westminster village to laugh at. All would have some sympathy with his comments being aired so publicly. But it takes a special kind of hatred to come up with the sort of contempt Mercer was offering Cameron. Asked what the prime minister has done wrong, Mr Mercer replied: "He was born."

Back in the days when the Lib Dems still thought it was a good idea to demonstrate that Nick Clegg and David Cameron were capable of working together, the pair participated in one of their many joint question and answer sessions. Having wrapped up, Clegg made the same mistake which prompted last year's biggest gaffe, Gordon Brown's 'bigotgate' slip. He forgot his microphone was on.

As he strode off with the PM, Clegg joked: "If we keep doing this we won't find anything to bloody disagree on in a bloody TV debate!" Video footage showed his press adviser pointing out the bloody thing on his lapel was still switched off, after which the deputy prime minister was seen to pull a truly ridiculous face. "Yeah, I cringed when I saw it," he confessed afterwards. Stating the bloody obvious, he added: "It just shows you can't afford to make tongue-in-cheek remarks with a microphone on your lapel. I mean, look, it's just a bit of banter."

Cabinet ministers pride themselves on being good constituency MPs, so it was excellent news for the people of Chingford and Wood Green that their local MP took a stand to save an endangered local hospital. Iain Duncan Smith took his campaigning comments a little too far, however. "Waiting times have already increased since last year and maternity services at Queens and Whipps are already struggling to cope," he told the Evening Standard. "Patients in my constituency will really suffer if this closure goes ahead and we must prevent it."

Oh dear. He had inadvertently "admitted the truth" – that waiting times were going up under the coalition. As shadow health secretary John Healey observed: "This is not what people expected when David Cameron promised to protect the NHS." It probably wasn't what Cameron expected of his work and pensions secretary, either.

Public respect for Vince Cable was at its height in the two years before he joined the coalition government. He was the wise old sage of the Liberal Democrats, seemingly incapable of opening his mouth without some pearls of wisdom dropping from them. Yet this was the same period, it emerged this year, when he failed to pay a tax bill worth as much as £25,000. A little unfortunate, really, as he had said at the time that tax avoidance "strikes a particularly ugly note in these straitened times".

While not living up to Cable's usual standard of spectacular gaffes, this was nevertheless a little shameful. He blamed his accountants for not having spotted the error, but HM Revenue and Customs saw fit to impose a £500 fine nonetheless.

Prime ministerial speeches to party conferences are about as serious as they come. They get huge attention, and so are usually finely crafted pieces of work. Speechwriters labour on the details of the wording, sweating away over the summer while the rest of us are sipping cocktails by the pool, just so no stupid mistakes creep in.

This is why it was so unfortunate that David Cameron's speechwriters completely failed to get the right message across before the speech took place. An extract was released overnight (to get maximum coverage from the national newspapers) which suggested he was calling on Britons to pay back their personal debts as soon as possible – to help with the coalition's deficit reduction strategy.

We weren't impressed. The lobby pointed out that extra pressure on ordinary households would have left Cameron out of touch. By lunchtime it had emerged the line was modified from "that means households paying off their credit cards" to "that's why household are paying down their credit cards". A mistake like that should have been spotted long before then.

Energy and climate change secretary Chris Huhne – the man whose leadership campaign only succeeded in giving his rival the 'Calamity Clegg' label – had his own calamity this year. Followers of his Twitter account were baffled when he informed the world: "from someone else fine but I do not want my fingerprints on the story. C". We scratched our heads and raised our eyebrows. This was supposed to have been private, that much was clear. But the confused Cabinet minister had made a rather basic error in publishing it to – well, everyone. Cue numerous reports about the dark arts of politics.

Huhne subsequently explained the gaffe. He had been shown striking similarities between a speech by Ukip leader Nigel Farage and home secretary Theresa May's speech to the Tory party conference. So amusing was the apparent inspiration which Farage had inspired in May that he happened to mention it to a journalist, who decided to run with the story. Huhne was asked whether he wanted to comment – and his tweet was the reply.

He may have dismissed the error as being "fairly marginal", but it was far from insignificant in colouring Huhne's reputation further. It was made worse by association to our number one gaffe, however. What was the passage of May's speech which had been allegedly lifted? Here's a clue – it was something to do with cats. That section of the speech was, entirely independently, to become the biggest gaffe of the year.

Not one but two members of the government committed the same schoolboy error this year.

It was one of the odder images of the year. Cabinet Office minister Oliver Letwin, a key backroom figure in the coalition, caught on camera dumping government papers in a bin in the park.

An investigation had to be launched after the Mirror reported that the documents, which mentioned David Cameron and Nick Clegg but also included information about constituents, had been unceremoniously deposited in public bins. Unfortunate – but the story was resolved when Letwin pledged to take more care of his constituents' information. At least, we thought it was. Cable was forced to apologise a few weeks later, when he was discovered dumping ministerial paperwork outside his constituency office.

"Rape is rape," BBC Radio Five Live's Victoria Derbyshire told Ken Clarke during a phone-in back in May. "No, it's not," he replied. Big mistake.

His argument that some rapes were more "serious" than others prompted mass outrage. The opposition demanded his resignation. No 10 instructed him to get into reverse gear, and fast. So his proposal to halve rape sentences if the suspect confessed before trial was quickly shelved as Clarke grovelled for his error. His explanation, that he had got involved in a "silly exchange", only served to underline his reputation for being something of a liability. Clarke, a veteran of the political world, should have seen this was coming. It would have been the gaffe of the year – had he not contributed to another minister's slip-up later in the year, that is.

What happens when one Cabinet minister's embarrassment is compounded by the unthinking, news-fuelling comments of one of her colleagues? In our opinion, at least, the result is undoubtedly the gaffe of the year.

The catflap, as it became known, was not a scandal. It sprang from a section of home secretary Theresa May's speech to the Conservative party conference on illegal immigration and the Human Rights Act. May claimed that the legislation was making it far too easy for those facing deportation to remain in the UK. She mentioned an "illegal immigrant who cannot be deported because – and I am not making this up – he had a pet cat".

It proved rather unfortunate that, in fact, she was making this up. The existence of the cat had been cited as part of evidence that the foreign national had a long-term relationship with a British national, who most definitely was not feline. Worse still, the existence of the cat was not the decisive factor in the foreign national being allowed to stay in Britain. Ouch!

May was red-faced, certainly. But the news story would have faded into insignificance much more quickly had it not been for the outspoken criticisms of Ken Clarke. As the justice secretary he has been at loggerheads with May throughout the year, which may have explained why he got so carried away in lashing out at a Cabinet colleague – someone supposedly on his side. May's speech was "laughable" and "childlike", he told a local newspaper.

"In my opinion she should really address her researchers and advisers very severely for assuring her that a complete nonsense example in her speech was true." Double-ouch!

The media howled their appreciation, the story generated headline after headline, and the Tory party conference was more or less derailed. Catgate was a sort of gaffe squared: the most avoidable political headslap of the year.