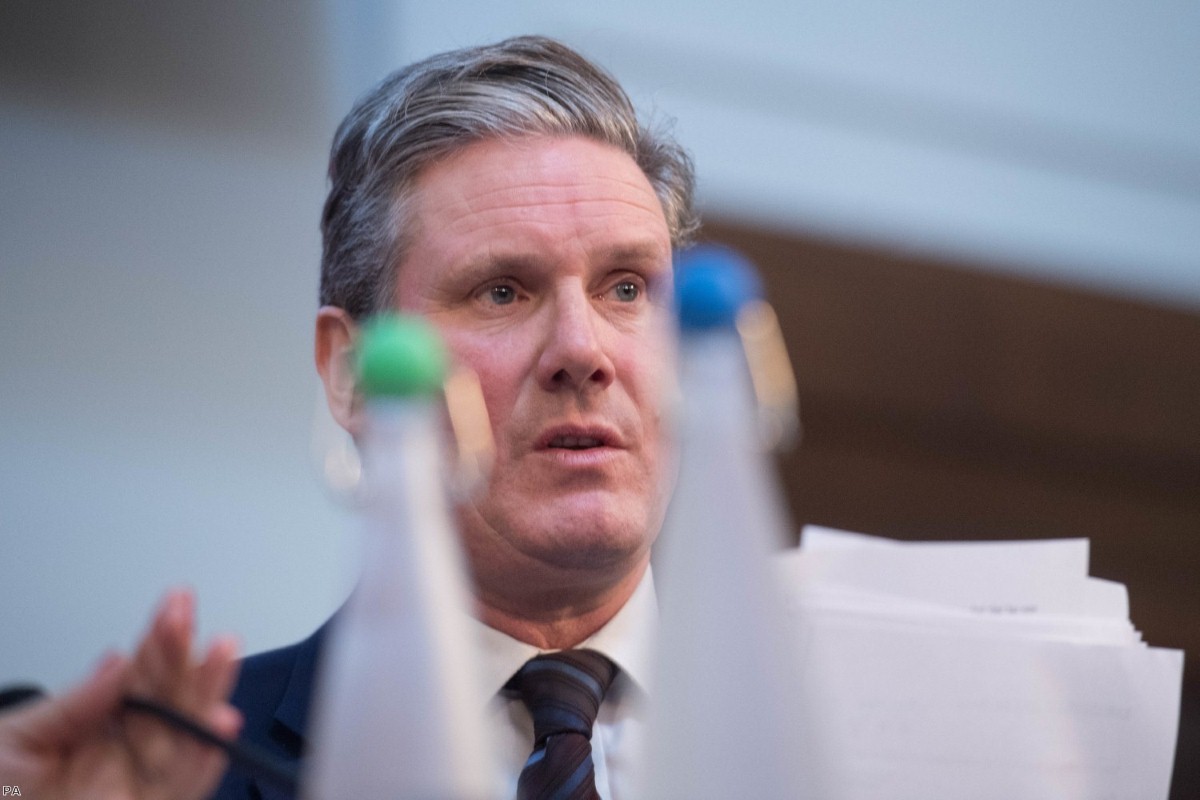 It's become a biannual tradition now for Labour to upgrade its Brexit policy in some significant way. Maybe we should turn into a national holiday, so we can at least get some free time to work out what the hell it means. But as confusing as these shifts can be, they all follow a similar theme: Keir Starmer pulling Jeremy Corbyn just that inch closer to where he wants to go. And the place he wants to go is quite clearly something like Norway Plus.

Last night, the opposition leader wrote a letter to the prime minister setting out Labour's conditions for supporting a deal. They reveal part of the plan, but to really understand it you need to combine it with Starmer's interview on Newsnight on Monday and a little bit of policy geekery about Swiss employment law. As ever with Labour's Kremlin-style Brexit policy, it only becomes clear when you pick up all the clues hidden in various locations. It's like Pokemon Go for broken political nerds.

Corbyn's letter reiterates an argument Starmer has been making for a while now. It says that the backstop is a regrettable but necessary device. It's necessary because the prime minister's end goal from Brexit, in so far as it can be distinguished, is for a Canada-type arrangement of different regulations and tariff rates. That means checks on the border in Ireland. And that means the backstop will come into force and may be hard to leave.

But instead of altering the backstop, it proposes altering the end destination, so that we can avoid it coming into force at all. This has the advantage of only requiring amendments to the future relationship document – not the withdrawal agreement, which the EU has refused to reopen. Given that Brussels repeatedly said the document could change if there were different red lines from the UK, this is manifestly deliverable and realistic.

But Labour is not being naive. It wants the changes locked in place with domestic legislation, so that Theresa May can't go back on what she's promised once the deal is secured.

Then there's the content. On the face of it, this doesn't seem to have changed much: Customs union membership with a say on trade deals and a close single market relationship. But there is now a bit more detail to the single market aspect.

Corbyn is using the word 'alignment'. This is not a word he's used much before. A quick check on Hansard shows he has said it three times previously in relation to Brexit in the Commons, two of which were quotes and the third a question about government policy.

But Starmer has been saying it with growing frequency. He talked about it throughout 2017 and 2018 and then much more this year.

On January 9th, he said:

"As for a single market deal, my own view is that there are advantages in what we call the Norway model but that there are also disadvantages in that, and therefore it must be possible – again, I have had discussions [with officials in Brussels] – to explore a close economic relationship that keeps alignment, with, of course, oversight and enforcement mechanisms to go with it, but which is not simply the EEA."

This provides some clarity. It suggests we'll keep the same laws as the EU, enforced by the same institutions. That suggests the same courts and agencies. There is no mention of areas we'll carve out – not even on Corbyn's hated state aid rules.

When people call plans like this 'Norway', they don't literally mean Norway. They mean that it is modelled on that type of arrangement. Starmer is clear he would not be looking to join the Efta group of Norway, Iceland and Liechtenstein and then, through them, stay in the single market through the EEA agreement. He's trying to set up something which is very much like it, but different.

One key difference from Norway is that it would involve membership of a customs union with the EU. So in this respect it would be closer. Labour accepts this would involve "alignment with the union customs code, a common external tariff and an agreement on commercial policy" but demands that Britain be given a "say" on future EU trade deals.

Quite what a "say" entails is another matter. It would certainly not involve a veto. But the EU has lots of formats in which countries are consulted on things. Norway is consulted on new regulations and then has its civil servants come in and sort out how they'll implement them. That is a "say", albeit not a terribly strong one. It is probable that the officials in Brussels will be envisaging something similar.

But in other ways the relationship would presumably be more distant than Norway. After all, Corbyn has repeatedly said that free movement would end after Brexit. And without free movement, you're basically out of the single market.

But there is a new wrinkle here. The Corbyn letter does not mention it, but Starmer did, in an interview with Newsnight on Monday. When he was asked about the free movement of workers rather than citizens, this is how he answered:

"Most people would agree that if someone is coming to do a job – and it needs to be done and it's been advertised locally beforehand with nobody able to do it – then most people would say: 'I would accept that'."

Two interesting things about this. The first is that Starmer does not rule out the free movement of people with job offers and in fact suggests the public would accept it. This is only a small step from the existing system, where free movement rights are contingent on having a job offer, a course placement or being able to demonstrate independent means after three months. Maybe Labour would offer strict enforcement of this existing system, or else accept a certain loss of market access in a new arrangement for making free movement contingent on a pre-travel job offer.

The other interest aspect is the mention of jobs being advertised locally. This seems to be a reference to recent Swiss policy, in which new roles in industries with a high unemployment rate have to be advertised in local job centres for five working days before they can be promoted outside those offices. There is no restriction on who can apply for the role – that would breach EU rules on non-discrimination. But the location of the ad is restricted for a time-limited period. That's been accepted by the EU before. It would be again. Perhaps it could operate across the economy, without the need for sector-by-sector unemployment-level benchmarks. There's stuff to play with there.

Starmer is quite clearly moulding an immigration policy which could be sold at home but still, when you get down to it, is more of a reform of free movement than an abolition. And that means that you could keep really very close to the single market indeed.

It's ambitious, but it is within the realms of what the EU has said is possible. And importantly, it could potentially be hammered out before backstop came into operation. The withdrawal agreement puts in place a transition to the end of 2020, with a one-time extension to 2022. That's just about enough time for this sort of thing if the negotiating team are less incompetent and self-interested than the existing one – and if they know what they want going in, rather than use up vital negotiating time arguing with themselves.

Of course, it would be helpful if Labour could actually present these ideas properly, rather than forcing journalists to run around piecing them together. And none of this changes the fact that May is unlikely to ever go for this option. It would tear her party in half.

But be that as it may: it is the closest thing to a credible plan we've seen from Labour since this thing began. Starmer deserves credit for pushing the leadership into a position where it could accept it.