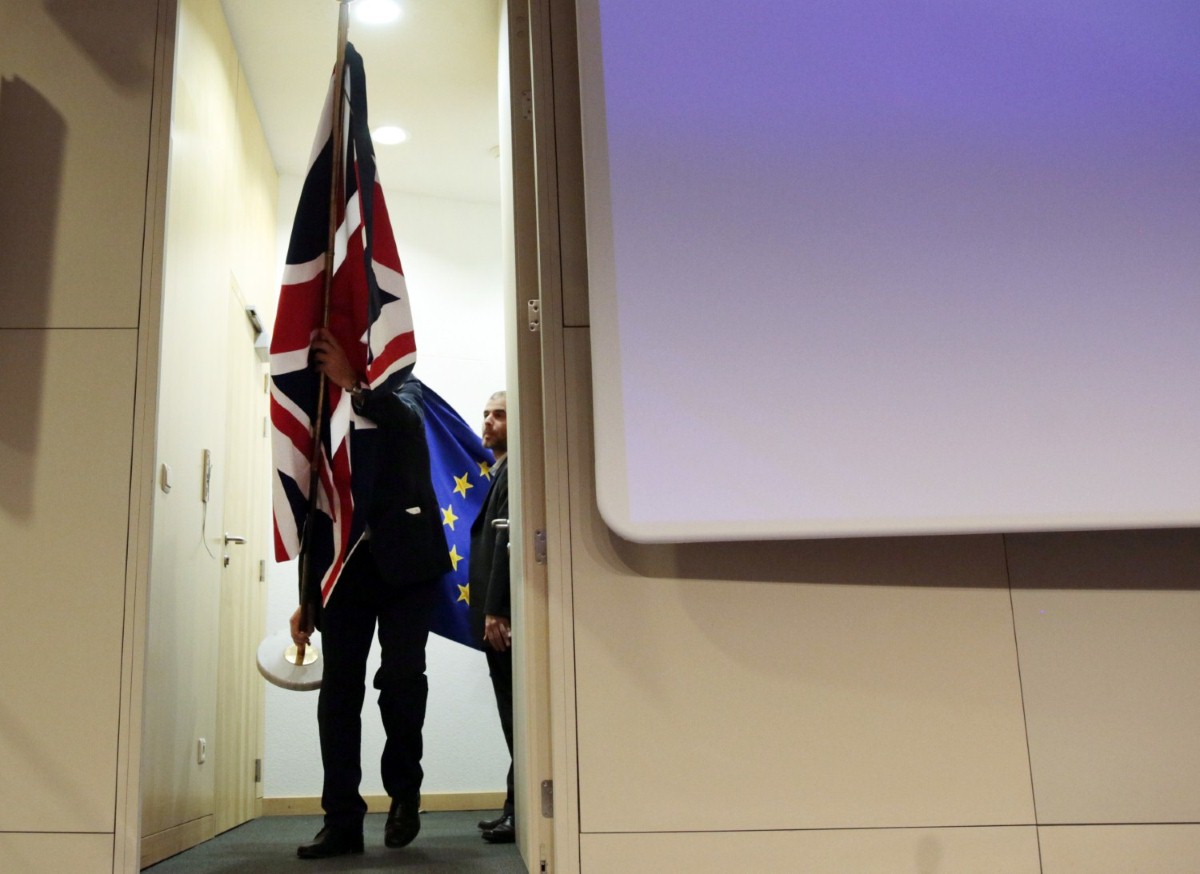 EU no-deal plans: Our childish outburst has put us at their mercy

The children threw a tantrum and the adults have had to come into the room to start sorting out the mess. While we all spent yesterday debating whether Jeremy Corbyn did or did not say 'stupid woman', the EU quietly released its preparation for no-deal.

It did two things. Firstly, it stopped the worst possible outcomes of a cliff-edge in March. And secondly, it put the UK on a string. We would be saved from a total disaster by EU action. But that action is not intended to help us. It is to limit the damage to its own operations. And it shows. No matter what the talk of a 'managed no-deal' at home, the reality is that the structure of no-deal will be decided, just as the talks have been, by what the EU wants. This is what happens when you put yourself at a negotiating disadvantage and then get lost in your own delusions.

This is what they've done.

Aviation gets a rescue package. International flights have no WTO-style back-up system, so without something in place we'd simply not be able to fly to or from Europe. The EU are offering a point-to-point system allowing us to continue doing so. But there are conditions. It only lasts for one year. We can no longer fly within Europe. We can only fly there and back.

Haulage also gets a rescue package, along similar lines. At the moment our lorries go wherever they want in Europe, whenever they want. For decades we've relied on this frictionless system because of a just-in-time operating structure which ensures a continuous flow of material into and out of production plants. Factories aren't stopping points anymore. They're a central hub in a goods pipeline.

Outside of the EU, you need a European Conference of Ministers Transport (ECMT) permit to get your lorry in. There are roughly 2,000 of these available and we have 40,000 lorries so we were facing the detonation our haulage network. The shock to the supply chain would have been instantaneous and severe.

Instead, the EU is offering a continuation of the existing terms. But only for nine months. It lasts until New Year's Eve 2019. And it's bare bones. The agreement would only allow UK operators to go to and from European destinations. They would lose the right to operate within or between European countries.

The agreement is also dependant on UK operators following EU rules, for instance on drivers' hours. If at any point the Commission decides they are not, they can unilaterally revoke it. This will be an EU regulation – not a deal. So they do not need to even consult with Westminster. They can just end it overnight.

There is also an emergency provision for food exports. Food produced outside the EU is subject to a strict enforcement regime to make sure it's safe. That means the exporting country needs an approved national body whose facilities have been certified by the EU, documenting the standards of products.

But the UK has not been certified as a third-country supplier, because until now it was an EU member state. Six thousand UK meat processing plants now face individual audits by British authorities, which will then be checked by EU officials and put to a standard veterinary committee for approval. The same goes for companies supplying food and drink to the EU.

The EU no-deal document allows for certification to be front-dated so that the UK is given authorisation status on March 30th and then all the necessary inspections happen afterwards. This was vital to prevent a six month break in which no agricultural exports to Europe would have been possible at all. It's a liferaft for agriculture.

They've also unclogged the inspection regime. Products of animal origin have to enter the EU through special border posts manned by a vet, but these barely exist. There are none at Dover-Calais, the main route into the continent, and very low capacity at Dunkirk. The EU allowed them to be set up ahead of time to meet demand.

While the Brexiters were bleating about no-deal, Brussels did the dirty work. But let's be clear: it really is dirty. They did it according to their interests, not ours.

There was no help, for instance, with the customs process. That means we are still facing a system-wide bureaucratic nightmare.

Every shipment on the back of a lorry needs an import and export customs declaration and a safety and security declaration. For some lorries, which are just carrying one shipment – say a few hundred crates of oranges going to Tesco – that's not too much of a problem. But if a lorry is carrying multiple shipments – a book for me, a bottle of wine for you, a present for your uncle – they have to fill out these documents countless times for one journey.  And they're not short either, they have about 30 fields on them.

Plenty of firms run around 300 lorries a week between the UK and EU, with up to 8,000 shipments on each one. They estimate that it would take 150 people working eight hours a day to fill in the customs declarations for a lorry like that. It's an administrative apocalypse.

Companies haven't been trained to do this. They simply haven't had to do so for decades. Customs officials haven't either. The government needs to hire tens of thousands of them to complete this work. And no matter what it said in its little am-dram Children of Men performance this week, it cannot level-up capacity that quickly.

Traffic modelling studies expect 20 hour tailbacks on the first day for every additional two minutes added to checks at Dover-Calais. The increase in check time is likely to be more substantial than that.

Once a blockage starts, it will balloon in both directions. The ferries going between the UK and France only leave once they're full. If they're not full, they don't start the return journey. There is no such thing as a one-way solution to this problem.

Take radioactive isotopes. The most common one for healthcare is Technetium-99m. It is used for screening about 700,000 patients a year for conditions like prostate cancer, or heart, thyroid, bone or liver disease.

We are heavily reliant on Europe for our supply of this material. It comes predominantly from the Netherlands, where the parent element molybdenum-99 is produced. This has a half life of 66 hours. It is shipped across the Channel Tunnel at night, when it's quiet, goes to a UK distribution centre, and is sent out to hospitals. It is then used as Technetium-99m for medical purposes. At this stage it has a half life of just six hours. Time, in other words, is of the essence.

This material cannot be stockpiled, because of its short half life. It is uniquely vulnerable to transport disruption. Any blockage caused at Dover-Calais would essentially close down the tunnel for the transportation of nuclear material. It would then sit there decaying and become unusable. Half life is exponential, meaning that the best activity is right at the start. Each minute this stuff sits without reaching its point of intended use is a waste.

Even if we do manage to get it to the UK, it may be pointless. Once it has decayed too far it is illegal to use on a patient, because you are simply inundating them with the side effects of radiation therapy but not providing a high enough dose for the intended medicinal use.

This does not just apply to Technetium-99m. There are dozens of other isotopes – some with longer half-lifes, some with shorter – which will be affected, many of which are used for treatment as well as screening.

And even this disasterous outcome is a best-case no-deal scenario. This propoal is just that: a proposal. It's possible MEPs in the European Parliament or one of the 27 member states will amend it, or even reject it outright. Iain Duncan Smith may enjoy touring TV studies blathering on about how terrified the Europeans are of us, but he is merely reflecting his own pitiful emotional inadequacy. The bleak reality is that we are at their mercy.

Even if it does pass, it's a horrible emergency situation to be in. Sure, the very worst outcomes, the real end-of-days stuff, is quarantined. But this provision is time-limited, it is contingent on continued EU approval, and it is completely one-way. It amounts to forcing investment out of Britain at the end of a spike.

Imagine you are a business looking at this situation. There is no stability here. Companies doing transport contracts focus on multi-year periods. Emergency nine-month provisions, which can be revoked at any time by one party, are simply not tolerable, even if they were somehow put on a rolling basis. And then there would be the tariffs and customs and regulatory checks on the UK-EU border. Put simply: Why would you stay?

This isn't a warning about the future. It's already happening, with airlines opening up new headquarters in Europe to be able to continue operating their flights. And this is just the start. If this situation pertains, we're going to bleed out.

We are destabilising our own country. But instead of dealing with it, our political class – the ERG, the opposition and the government – have decided that the best thing to do is to spend a day talking about a man saying 'stupid woman', then go home for the holidays and maybe have a vote in mid-January. It's a criminal act of patriotic irresponsibility.