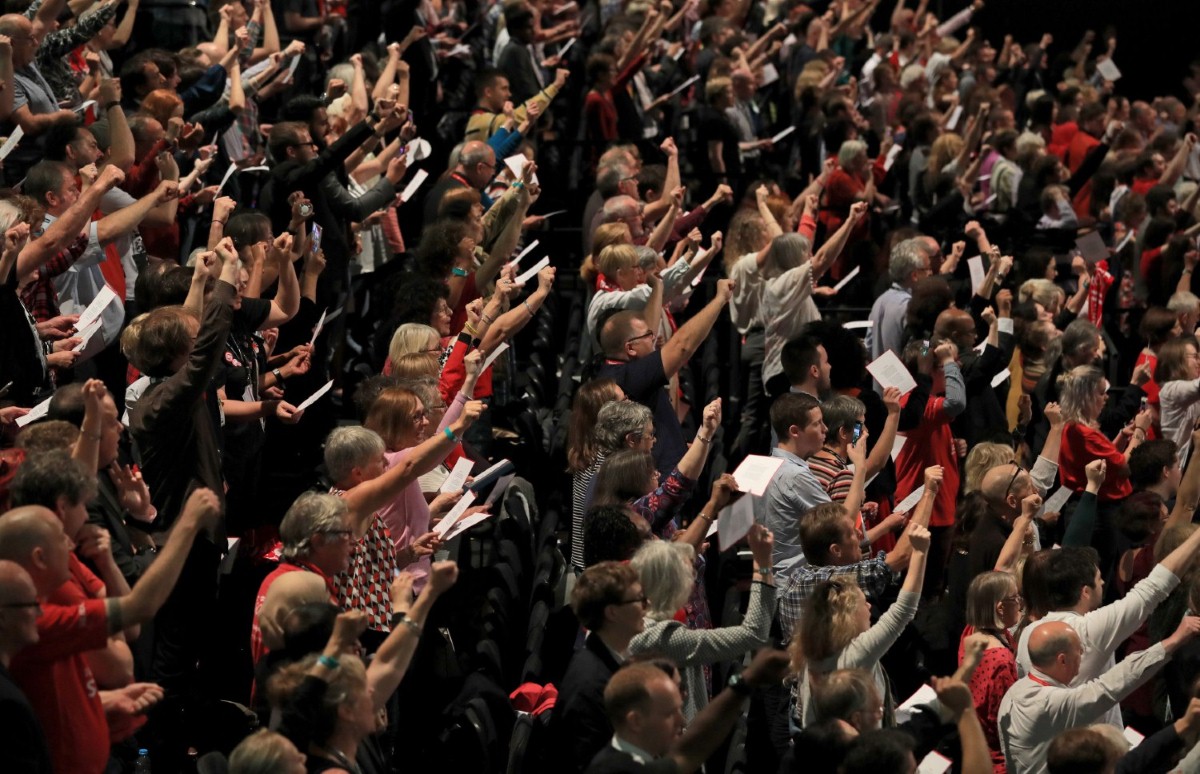 Corbyn speech: Idolised leader enthralls those who have seen the light

Jeremy Corbyn was up on stage for minutes before the chanting died away. He stood there, awkwardly smiling out at the hall as it serenaded him with his name. The seconds ticked by.

Amid all the chaos and self-harm of Brexit, it can be difficult to remember the things this country does well, but instinctive cynicism about politicians is certainly one of them. Sure, these are party supporters. They've taken time off work to be at a party conference and are, by virtue of that single fact, not normal or healthy individuals. They are the core tribalists, those who have given themselves over to the cause. But let's not pretend that this phenomenon is limited to the hall. We saw it throughout the summer at music festivals. We see it online. There is a terrible new tradition taking hold in Labour, of something approaching hero worship.

This is regularly denied, of course. They say the idolisation is ironic, that the chants are tongue in cheek. But in truth the support is operating in a strange shadow-world of irony and reality. When useful, it is ironic. But there is genuine adoration there, with all the tribal identity it entails.

Once the chanting died down, we were treated to a fairly standard speech from the Labour leader.  He took a tour around policy areas – Brexit, housing, robotics, foreign intervention – then gave us his opinions on them and moved on. He did this in his first conference speech, carried on during the general election, and was at it again today. It’s not doing him any harm so he sees little reason to shake things up. The crowds agree with him, so they enjoy hearing these things being stated.

The only real change is that he now understands how long a sentence should be. He'll never be a natural orator, but after giving more speeches in the last year than the rest of us will in our lifetime, he has learned to speak with some rhythm and punctuation. Ultimately though, we're in the same place we were when he became leader. To the unconverted, it is tedious, long-winded and amateurish. To his followers, it is deeply inspiring.

Tony Blair, Gordon Brown and Ed Miliband – whatever you thought of them – had themes to their speeches. There was something to hold it all together, even if rather tenuously. There's none of that here. It’s like stumbling upon various friends at a party, none of whom know one another. Other leaders also tried to convince their audience of their arguments. Sometimes that was aimed at the hall – you think of Blair presenting military intervention in progressive terms or David Cameron selling gay marriage as a fundamentally conservative initiative. More often than not, it was aimed at the country at large. But either way there was a sense of intellectual engagement – of trying to form an argument.

Most of these speeches were dreadful and their adherants barely believed in them anyway, beyond whatever strategic advance they thought they offered. But there was something healthy about the idea of dialogue, of politics being about convincing people.

There is none of that here. Corbyn isn't arguing for his beliefs. It's not clear he really believes that there are arguments against them. Beliefs and political identity are considered unchangeable, like rocks or valleys. Sometimes the sun shines on this rock, sometimes another. But the rock itself is unmoved. There is no dialogue here, just a statement of fact. This is partly why his speeches feel so tiring and long. They are a list of beliefs, stated as if he were describing a table. If you don’t already agree with him, there's nothing to latch on to. It’s not for you. It's like reading a novel in a language you don't understand.

Sometimes his pronouncements are right. Sometimes they are wrong. For what it's worth, I happen to agree with an awful lot of them. But the manner is more important than the content. This was a speech by a man who is driving forward. If you want to jump on board – fine. But there'll be no slowing down to encourage you to do so. He feels no need to try and carry the country with him.

Surprisingly, this has done him no harm at all. More than anyone else in British politics, bar none, he is winning. He can rightfully say that all those who have criticised him before were wrong and he was right. Voters have warmed to his friendly-uncle-with-an-allotment image and not troubled themselves too much about the more extreme elements of his programme.

Perhaps, as he says, the centre ground has shifted towards him in the wake of the financial crash. Perhaps they value the unchanging nature of his convictions. Or perhaps politics is an increasingly tonal business, where his relaxed, at-home charm trumps Theresa May's brittle vacuity. Either way, he has been rewarded, not punished, for his lack of argument. The Labour juggernaut trundles on.

Up on that stage today, we saw a man who was completely uninterested in arguing for his beliefs and an audience which idolised him for it. Each part of that equation supports the other.

For years now we have warned of the growing echo chambers of online political debate. The Labour conference shows that phenomenon is now firmly entrenched in real life. For such an old-fashioned politician, ripped seemingly straight from the 1970s, it's funny to think that Corbyn is the first party leader of the digital age.