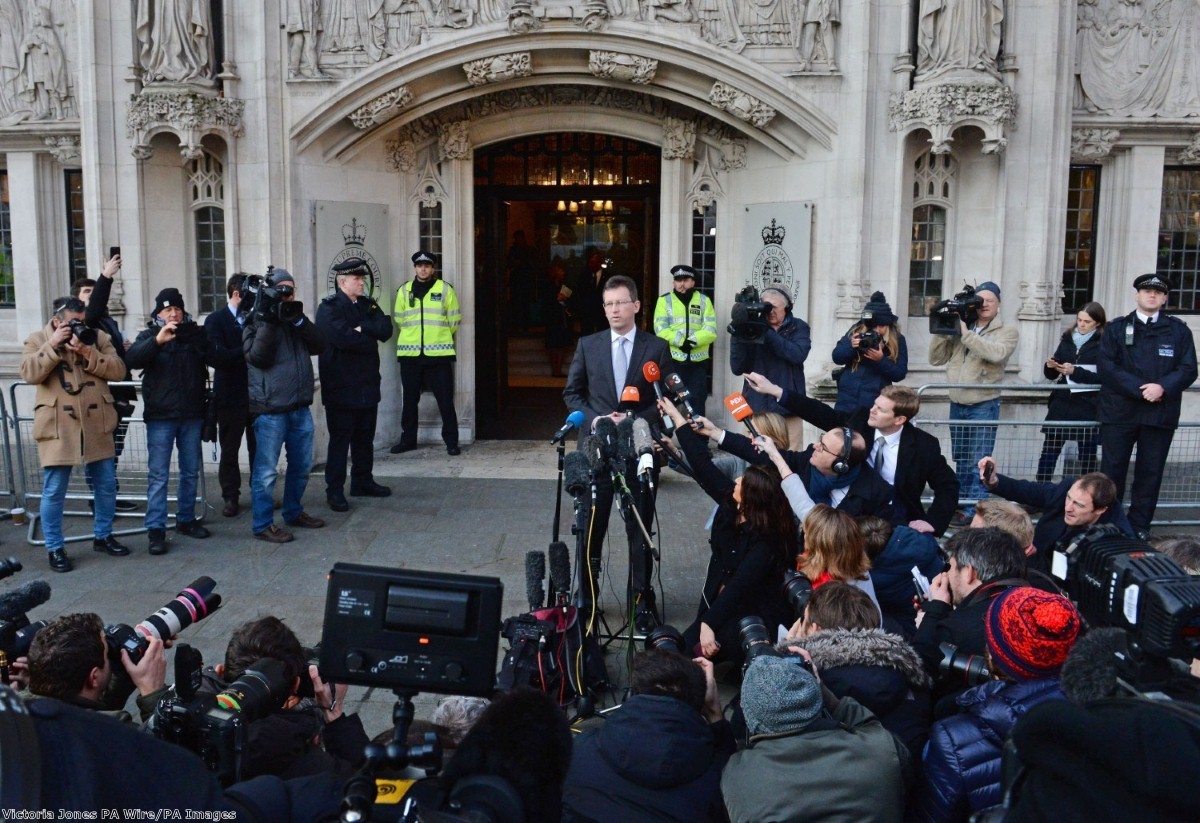 Theresa May will be quietly pleased with the Supreme Court judgement

Most press reports of today's Supreme Court judgement will concern the government's failure to prevent parliament having a say over Article 50, but in reality that's the least important part. There was a subplot to this drama, in the form of the devolved assemblies. This was where the real danger to Brexit was. If the court ruled that consent from Scotland and Northern Ireland were required, it would have been almost impossible for the government to stick to its timetable. But they didn't.

The judges ruled that the Sewel convention, which states Westminster won't interfere in devolved matters, was precisely that – a convention. It was not a matter of law. It also ruled that the devolution Acts did not require EU membership and that requirements in the Northern Ireland Act for the public to have a vote on any attempt to create a united Ireland did not relate to other changes in the UK's constitutional arrangements.

If this had gone the other way, it would have put a proper spanner in the works, especially given the state of politics in Northern Ireland. Theresa May will be relieved, not dismayed, by the decision, especially since she never needed to be vulnerable to it in the first place. The devolved case was only heard because the Supreme Court has jurisdiction over Scotland and Northern Ireland. If May had accepted her defeat at the high court, which only has jurisdiction over England and Wales, she'd never have been subject to this risk at all. For that matter, you might ask why the government bothered to even bring the case in the first place, given no-one ever thought it would lose a vote in parliament.

That aspect is symptomatic of a hopelessly insecure, power-mad executive. The decision to then pursue the case all the way to the Supreme Court and jeopardise the timetable she had set herself suggests May throws away strategic advantages seemingly without realising what they are. These two errors are particularly troubling given her structural disadvantages once she actually does trigger Article 50. But regardless, she got away with it this time. She'll probably also be pleased that the judgement was split eight to three. That makes no real difference, but it is politically advantageous to her to show that it was a tough decision.

The judgement itself will change nothing. That is not the court's fault, or May's success. It is entirely due to Jeremy Corbyn. While he is right that MPs should vote for Article 50 – it is unthinkable that they would block the result of a referendum – the bill requires amendments in which the opposition could seek to control the government's haphazard incompetence.

Downing Street currently wants to complete a comprehensive trade agreement, which will probably take about seven years, in two, and then get it ratified, which involves a veto by every EU member state, in some vague period of time which might be included in the two year timetable and might not be. It's impossible to tell. May's plan if she fails is to turn the UK into a tax haven. The press love it, but in reality it can't be delivered, storing up either economic catastrophe or public outrage for a later date. Labour needs to get some control over it.

Unfortunately, Crobyn's amendments are actually below the standard the government has set itself. He wants only tariff-free access to the single market, which is short of the goals of removing non-tariff barriers and securing freedom for financial services that May and David Davis have set. He is claiming to hold the government to account by putting forward a lower hurdle than that which the government itself is using. It would be bizarre and exasperating if one hadn't already accustomed oneself to the dimwittedness of the Labour leadership.

He then demands that there is no deterioration in British work, social or environmental standards. This is perfectly commendable but useless here. The great repeal bill will transfer over EU law for the time being, allowing ministers to easily say they've satisfied this requirement. The threat of reducing standards is not one that pertains during the Article 50 process. It comes afterwards, either when May delivers on her tax haven threat, or when we go into trade negotiations with other larger states, like the US, who will want reduced standards across the economy to make life easier for their exporters.

Finally, Corbyn wants a vote on the final deal, which May has already pledged. So in all three demands, the Labour requests are either already government policy, or actually demand less from government than it demands for itself. He also makes no mention of a public vote on the final deal, either in the form of a general election or a referendum. Given the emphasis on the importance of the public vote on Brexit, it is baffling why their consent for the final deal should not also be considered a core part of any democratically valid plan.

There is only one glimmer of hope. Corbyn's statement mentions a "meaningful vote" in parliament on that final deal. A lot hinges on his use of the word 'meaningful'. May's promise of a parliamentary vote currently has no substance. It will be on the deal she comes back with or no deal at all. Any option that does not involve the UK crashing out the single market and customs union at the stroke of midnight with no trade deals in place is a better option. A remotely sane parliamentarian will necessarily vote for it. It's like someone asking if you'd rather be shot in the knees or the head. Sure, you'll pick knees, but that is not the same as consenting to it.

That vote could be meaningful if it had a 'try-again' option which sent negotiators back to the drawing board. That would be politically very messy, both at home but more importantly in Europe, where there are no guarantees that the Article 50 process can be extended (it requires approval by all remaining member states) or that there would be any appetite to keep negotiating. But it remains the only way that final vote has any meaning at all. And just because it's politically unpalatable, so what? The worst the EU can do is kick us out with nothing agreed, which is precisely the consequence of parliament rejecting May's deal. If Corbyn had the bravery to interpret the word 'meaningful' in this way, his amendments might be worth something. But given the way events have progressed so far, it's not likely.

Failing that, Labour could at least seek to nail down the Brexit timetable, getting rid of all this misleading nonsense about ‘implementation’ and fasten it with impact assessments, thereby hopefully increasing public awareness of the severity of the choices that are now being made. There is some potential for action in this area, as the tweet below from Labour’s shadow Brexit minister shows. The fact this is the height of what we might hope to achieve at this crucial moment in British political history is depressing, but that’s where we are.

As expected, Supreme Court upholds High Court's ruling – confirming that only Parliament can trigger the start of the EU exit process.

There'll probably be a political event, hundreds of years from now, when today's judgement is raised and serves to once again restrict the powers of an over-mighty government. That's a lovely thought. We'll all be walking around with our holo-screens and genetically engineered lungs and hoverboards and a moment of political crisis will raise this case, just as this case raised the Case of Proclamations from 1610. That's part of the extraordinarily nimble, dynamic beauty of the British constitutional arrangement. And on that day, the public may be very grateful to those who bought this challenge. But for now, in the heart of the Brexit debate, the reality is it makes very little difference.