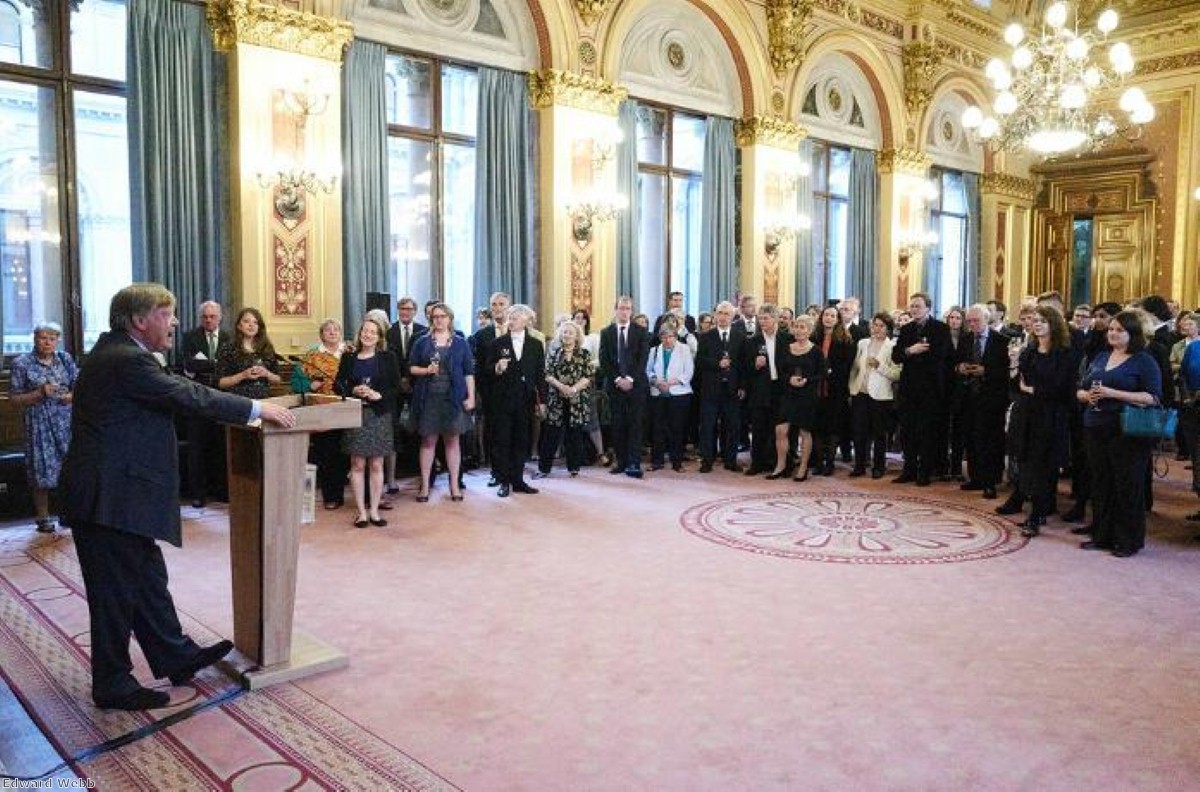 Ken Clarke: Germany ‘no longer a place to bomb’

Even self-confessed grumpy old men like Ken Clarke don't think the best policy towards Germany is as a "place to bomb".

It probably wasn't his most diplomatic comment. Yet there we were, with a group of Germans from the Bundestag in Berlin next door in the grand surroundings of the Foreign Office's Locarno Suite. And Clarke was bringing up the Allied strategic bombing defensive which devastated Germany in 1943, 1944 and 1945.

"This is the Federal Republic" Clarke declared, after I put it to him that the sensitivities of commemorating the First World War centenary might sit a little awkwardly with the full-on diplomatic agenda for European reform which Britain is pressuring Germany with in 2014.

"It's relationships with modern Germany we have now. For a long time the British were obsessed with the Second World War. Older British people, you'd talk to them and all they'd think about would be Germany as a place to bomb. That's not where younger people are, although I'm a grumpy old man myself."

This typically eyebrow-raising comment from the former minister without portfolio came in what turned out to be Clarke's last interview before leaving the government.

He'd just returned from Berlin on a mission to patch things over with the Germans, after David Cameron had succeeded in alienating Angela Merkel and co over his opposition to Jean-Claude Juncker.

Clarke was in demob-happy mode, as he subsequently confessed. Later that week he nipped up to his constituency to watch the Test match, while telling officials he was engaged in vital constituency business.

I was interviewing Clarke for a documentary I've been making for BBC Radio 4 on Anglo-German relations and, in particular, a very odd diplomatic venture by MPs and peers in the Parliament Choir.

I got the idea for the programme after singing in the choir myself during its joint concert in Prague's St Vitus Cathedral in 2010 with a group of Czech senators.

The reception afterwards in the Archbishop's Palace might have got expenses-minded journalists frothing at the mouth, but to me it seemed like there were genuinely valuable links being forged. This, it turns out, is what politicians mean when they talk about 'cultural exchanges'.

Yes, there are hard questions to be asked about these sorts of activities. But this was in no real sense a 'jolly'. Using music to bring two countries together – especially these two countries, who have notched up a lot of conflict in the last 100 years – can only be a good thing.

When I interviewed him in the Foreign Office, Clarke made clear these sorts of relationships built up in parliament often become extremely important if you find yourself in government.

He added: "If you're going to be a participant in British politics in a sensible way, it's a very good idea to get to know your German opposite numbers, because you'll be dealing with them quite frequently. The European Union plays a big part in British politics and always will, I hope."

That seemed to be the message the Germans were sending to the British in the backstage diplomacy surrounding this concert.

Chancellor Angela Merkel jumped at the chance to upgrade the significance of the concert when it was brought to her attention in February. She requested a parallel political programme take place, which duly led to a group of German MPs visiting Westminster for the concert and the receptions surrounding it.

Music can bring people together – even the absence of it, as Clarke pointed out in his speech to the Parliament and Bundestag Choirs shortly after my interview.

"I am not singing in the concert," he declared, beaming out at his audience. "That is the single greatest contribution I can make to good Anglo-German relationships."

The government took a back seat in this initiative. It was parliament who led the way, boosting relationships and improving understanding of what exactly motivates modern Germans' view of Europe.

That is a firm conviction that the European Union must stick together in order to ensure the continent does not destroy itself with a war yet again.

Something, surely, worth singing to the rooftops about.