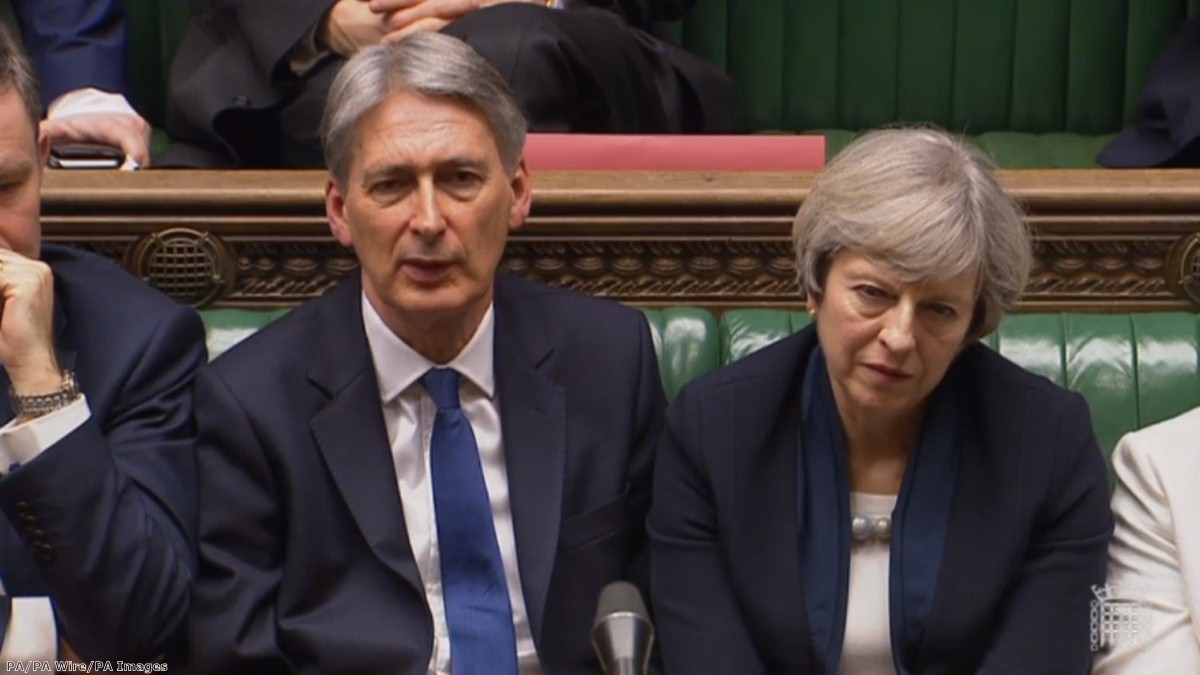 Week in review: Reality is tearing the Tories apart on Brexit

Today's skirmishes are the first shots of 2018's internal Tory war on Brexit.

The fighting began yesterday, when Philip Hammond stressed that any changes with Europe after Brexit would take place "very modestly", thereby keeping the two economies "interconnected and aligned".

This provoked a predictable backbench backlash. Jacob Rees-Mogg, who acts more and more like he is in a leadership contest, said "I profoundly disagree with the chancellor" and damned ministers for being "cowed by the EU". Former minister Andrew Percy told the chancellor to "put a sock in it" while his colleague Owen Paterson said "it would be good if all Cabinet ministers stuck to government policy".

Downing Street – petrified, as ever, by anything which spooks the headbangers – started briefing against Hammond, stressing that leaving the single market and customs union "could not be described as very modest changes".

But far from moving away from government policy, Hammond is merely reiterating the first phase agreement the UK signed a month ago, in which it promised to accept "full alignment" with the EU to prevent a border in Ireland. Ministers tried to put a brave face on it, but this doesn't just mean having the same rules as the EU now. It means we have to keep them that way in future. If anything, Hammond overstates the extent to which Britain can move away from the EU system.

The consequences of moving away from Europe are very severe. Britain would close itself off from its largest market and recreate a border in Ireland.

The choice ahead of the UK is simple: full trade and little control, or full control and little trade. Neither are palatable. Once the reality of that choice becomes clear, people will split down the middle. The unspoken, internal divisions in the Tory party between the headbanger Brexiters and pragmatic Brexiters will be harder to suffocate with cake-and-eat-it platitudes.

Meanwhile, a second front was opening up in the Tory psychodrama civil war – this time on transition.

As Hammond battened down the hatches against friendly fire, David Davis was preparing a speech on his plans for what happens in the two years after March 2019. The Brexit secretary had himself experienced a savaging at the hands of Rees-Mogg during a Brexit committee hearing earlier in the week, in which the backbencher told him Britain would be a "vassal state" during transition – taking on all EU rules and yet not having any role in formulating them.

To counter that impression, Davis is emphasising that Britain can negotiate and perhaps even sign its own trade deals during this period – even if it can only implement them later.

He's trying to put a brave face on things, but the reality is that Britain is going to roll over on everything. Europe has been clear that only one thing has been on offer. It was the original offer and it is the only one available now. There will be no other offers. Britain is going to keep everything exactly as it is, except that it will lose any power to influence the rules – either via the election of MEPs or through voting rights in EU agencies.

Davis' lame efforts to pretend that Britain will be able to negotiate new trade deals in this time are just an attempt to focus on the positives, even where they have no substance to them. Sources in Brussels have always been perfectly happy to let the UK negotiate trade deals during transition because they know this freedom is largely theoretical.

The UK doesn't have the negotiating capacity to conduct dual track talks – one set with the EU and another with everyone else. Even if it did, two years would not be enough time. And other countries would not want or be able to agree a deal with the UK until they understood what its final relationship with the EU was.

Imagine that during transition Liam Fox tried to talk to the US about a deal. The quid-pro-quo of a UK-US trade deal would be that the US opens itself up to penetration by UK financial services in exchange for the UK opening itself up to US manufacturing and agriculture. Even this is unlikely to be achievable, but lets pretend for a moment it can be done.

Britain can only open itself up to US agriculture if it has disconnected itself formally from the EU, because there are different standards on their products. All that chlorine-soaked chicken and hormone-injected beef is not going to be allowed into the European market. The UK can either detach from the EU and take those goods or stay attached to the EU and not take them. But whichever option it decides, it needs to know what its relationship with the EU is before it can decide anything with the US.

Far from being a potent trading powerhouse, Britain is actually having to go to the the EU cap-in-hand to help it roll over its existing third party trade deals with other countries. These range from full-fat free trade deals with countries like South Korea and Canada to smaller semi-skimmed trade arrangements with countries like the US and China, as well as other agreements on issues like energy, security and data protection.

Once upon a time, Fox bragged he could have all these deals sorted by the time the UK left in March 2019. He was told at the time this was not possible. Now that he has wasted a year flying around the world to no observable purpose, his department has effectively admitted his critics were right. UK negotiators are going to have ask the EU to help it roll-over those deals during transition.

There will be complaints by these third parties, but by presenting a united front – as they have done at the WTO on the vexed issue of tariff quotas – the EU and the UK stand a better chance of staring them down.

Again, we're seeing the brute reality of the Brexit dynamic laid bare: far from sailing across the world winning stunning trade victories, Britain is having to ask the EU to help clean up the mess it has made. Glory has turned to humility.

The same process is clear across the debate – on the terms of transition and on the development of the future relationship. The cake is not being had and eaten, it is being picked up and thrown at the wall.

The real choices entailed by Brexit are finally being recognised: a diminished Britain, choosing between trade and control. And with no delusions to sink into, the Tory party is increasingly free to go to war with itself.