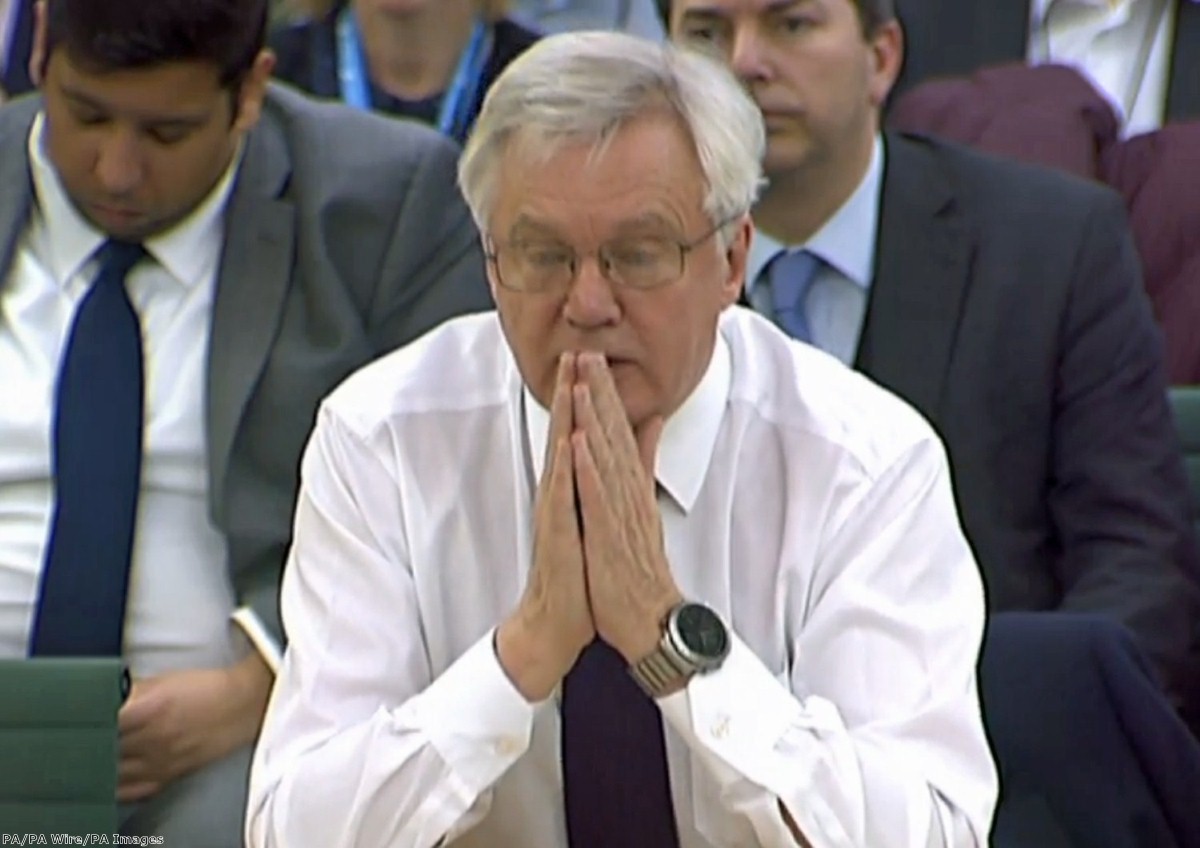 David Davis: Word games, imaginary impact assessments and the truth everyone was too embarrassed to spell out

Davis’s impact assessments are almost having a greater impact in non-existent form than if they’d been plastered in all their truth-telling horror beside a skull and crossbones on the front page of the Sun. In yesterday’s committee hearing, Davis admitted that the sectoral analyses which had, under great duress, eventually been submitted to parliament, did not, it turns out, assess the consequences of leaving the EU after all. Davis finally revealed the truth he had been systematically obfuscating for the previous year: “there is no systematic impact assessment”.

The story of the impact assessments is well-rehearsed. In September 2016 Davis told the Foreign Affairs Committee that his department was compiling analysis on “what is going to happen” to “about 50 cross-cutting sectors”. His then-colleague Lord Bridges said that “we are looking at the British economy, sector by sector, to see the impact that Brexit might have on it”, and later added that these were in a “manageable format”. In December 2016, Davis told the Commons about the “extensive programme of sectoral analysis on the key factors that affect our negotiations”, which would be completed prior to the Article 50 notification. He subsequently told the committee about “57 sets of analyses” affecting “individual parts of 85% of the economy”. In February 2017 Davis declared that he was using the analyses to “shape our negotiating position”, and in June announced that “nearly 60” were “already done”. Infamously, in October he boasted about their “excruciating detail”.

Except they weren’t extensive, or in a manageable format, or assessing the impact of Brexit, or informing the government’s negotiating position. Because they didn’t exist. Davis explained that the 850 pages submitted to the committee did not constitute ‘impact assessments’ at all – those were in fact a specific civil service term – and nor did they represent a forecast of what Brexit might do to those sectors, because he had had no truck with forecasts after the Queen asked a banker in 2008 why nobody had predicted the financial crisis. Rather, he insisted over and over again that the assessments were in fact ‘sectoral analyses’, an absolutely, entirely different thing.

The sectoral analyses that Davis promised simply looked at the size, revenue and regulations affecting various sectors of the economy, he said. They did not form an analysis of the consequences of different Brexit outcomes on any sector whatsoever. “Automotive?” asked the committee chair Hilary Benn, hopefully. “Aerospace?” Davis laughed that the “answer will be no to all of them”. The Brexit Secretary protested there was no need for an impact assessment, and that given the notorious inaccuracy of economic models, its “usefulness was near zero” – which prompted Benn to ask, not unreasonably, why Davis had promised assessments of what was going to happen to the economy.

If he hadn’t done them, why did he say he had – repeatedly? And more importantly, why hadn’t he done them? Eighty five percent of the economy was affected, but Davis had not deemed it necessary to stress-test any of it either in the run-up to the Article 50 negotiation, or since. The sectors’ potential exposure to Brexit could not have shaped any of the government’s negotiating strategy. Benn pointed out that impact assessments take place across government for all kinds of legislation, and it was perhaps appropriate that such a rudimentary procedure might have been carried out before the most dramatic economic change in Britain since the war. Davis was having none of it; everything depended on a trade deal, he said, and you didn’t need an impact assessment to tell you that obstructions to selling steel might affect some people in Wales. He had always used the term ‘sectoral analyses’, and had simply neglected to correct everybody else labouring under the delusion that these were in fact impact assessments. On and on, and round and round, it went.

The hour-long session was a frequently uncomfortable affair. It occasionally resembled a legal inquiry, with Seema Malhotra in particular asking Davis forensic questions about the sequencing of the commissioning of reports, the change in emphasis, and sharing of the information. Although Davis was at times subdued, and less bombastic (and good-humoured) than usual, he was also frequently defensive, aggressive and dismissive. He protested the difference between sectoral analyses and impact assessments with the staged weariness of someone trying very hard to make his interlocutors look like the stupid or deceitful ones.

Other members of the committee tried gamely to shed light on affairs. The SNP’s Peter Grant asked the difference between an ‘analysis of the impact’ and an ‘impact assessment’. Davis effectively protested that he may have used the word ‘impact’, but that didn’t mean he was at any time assessing it. Conservative ‘mutineer’ Jeremy Lefroy asked for assurances that the major impacts were being both considered and used to adjust the negotiating strategy. Davis hilariously replied that decisions on regulation would not be taken on ideological grounds – as though the decision to leave the single market was a result of sound economic pragmatism rather than unsubstantiated hysteria about immigration. As if to prove the absurdity of his claim, he also confessed to Benn that his department had performed no formal qualitative assessment about leaving the customs union, but the Cabinet had decided to do it anyway.

Davis offered numerous contradictions in his evidence, and the occasional delusion. Contingency planning, he said, didn’t require an investigation of Brexit’s sectoral impact. Hard Brexit, contrary to what the Department of Health warned, would not lead to a shortage of nurses. But amid the general chaos, he offered flashes of frank honesty that simply caused more alarm. “I don’t want to be rude about my department, but some of the reports weren’t very good,” he said at one point. He told MPs that he was only shown two of the chapters, a week before they were submitted to the committee, but deliberately hadn’t read them. Competence and curiosity appeared to be neither his nor his department’s strong suit.

Nobody is saying that we can predict the precise implications of a free trade deal or series of deals that have not yet been signed – but most people would consider it necessary to estimate the economic impacts of different Brexit outcomes before you trigger a two-year timetable that makes one of them a reality. Davis breezily informed the committee that impact assessments, focusing on the effects of a trade deal, would indeed be done at a later stage. It again did not seem to bother him that the government has been trying to kick-start that deal since October, without any assessments to assist it whatsoever.

The only thing that Davis really excelled at yesterday was word games. The reports were informing the departments’ view on our EU departure, but not showing them what departure looked like. An impact analysis didn’t mean an assessment of the impact. Davis joined the absurd Jacob Rees-Mogg in congratulating the government’s generosity for supplying any analysis to the committee at all, given they hadn’t used the right codeword in asking for it.

Once again, the government is using verbal gymnastics designed to illuminate nothing and obscure everything. Nomenclature is deployed to disguise either government policy and preparations, or their absence. MPs clearly believed that the assessments not only existed but also examined what ministers repeatedly stated they examined; but sectoral analysis showing what was going to happen proved to be nothing of the sort. Similarly, the government has promised to leave ‘the’ customs union while largely neglecting to discuss ‘a’ customs union that performs the same function; the prime minister promises that ‘freedom of movement’ will end in 2019, which must depend on a highly technical definition in order to enable a transition; and the transition itself is called, hopelessly, an ‘implementation period’ even though we only require it in the absence of something to implement.

The unspoken truth of yesterday’s committee hearing was the truth of Brexit as well. It is not about the economy but ideology. The government has made up its mind to leave the single market to end free movement, and to leave the customs union to re-imagine Britain as a trading empire. The analysis that Davis promised was evolving has not even begun. We might perhaps speculate that Davis does not want to tell voters that they are just going to have to suffer Brexit’s consequences, no matter how ruinous or unwanted.

The government doesn’t know the economic impact of leaving the EU, and doesn’t want to know. Some of the leading Brexiteers do not even seem to care. That might prove the most damning assessment of all.