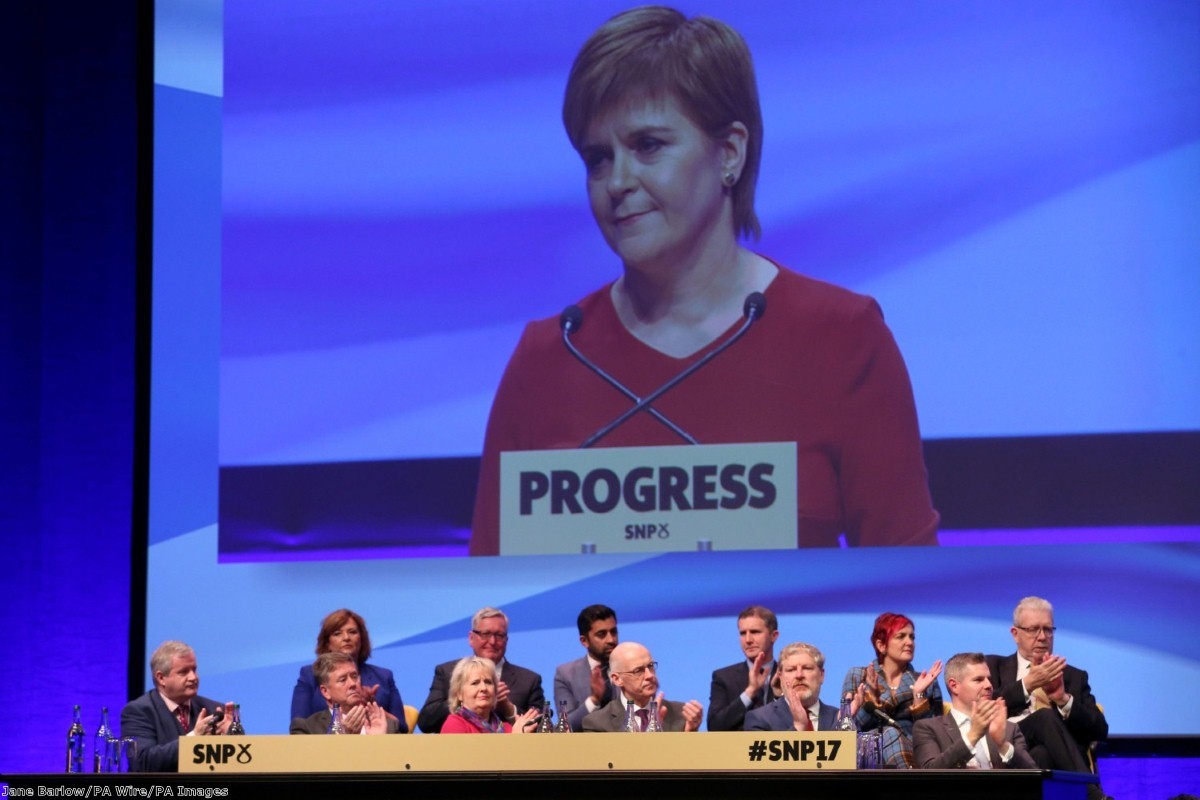 The SNP’s political stardust is starting to fade

Since the 2014 independence referendum, there has always been a section in Nicola Sturgeon’s autumn conference speech which uses the “I” word – independence.

Usually, delegates cannot contain themselves, applauding, hollering and, more often than not, rewarding a mere mention of the word with a sustained standing ovation. There was a bit of that when the SNP leader reached that paragraph this time, but nothing like there’s been in previous years.

“To all of you here in this hall and across our country who are impatient for change,” said Sturgeon, “let me say this. We may not yet know exactly when the choice will be made. But we can, we must, and we will always make the case for independence.” And that was that, a rather flat line in a pretty flat speech at, it has to be said, a generally flat conference.

This is understandable. No party – not even Jeremy Corbyn’s – can maintain political stardust forever. The SNP has been in government for more than a decade, but more to the point, it no longer has an election or referendum on the immediate horizon. The party is at its best when it has a clear goal, and the lack of such a clear goal after an eventful decade is having a palpable effect.

That said, to some extent the conference was deliberately low key and the first minister’s keynote speech purposefully dull. Accusations that she’s a) obsessed with independence, and b) not getting on with the day job have cut through to voters and like the shrewd politician she is, Sturgeon delivered an address that could hardly be criticised for ignoring bread-and-butter issues.

There was a continuing commitment to increase free hours of childcare – a policy directed at that key constituency of working mothers the SNP has to win over if it’s to build a majority for independence – and also the establishment of a new publicly-owned not-for-profit energy company by the end of this parliament. The latter pledge was also intended to keep those six Scottish Green MSPs sweet, not least because there’ll be a budget to pass in a few months’ time (the Scottish government, it’s easy to forget, is a minority one).

But there were lots of spending pledges (i.e. £840 million on that free childcare), which created the impression the Scottish government might be softening up voters for tax increases in that same budget. Not so, Sturgeon took care to say, it’s all been costed, but she also went on to say that of course “a fair society must be paid for”, and that it would be “right to consider how our limited tax powers might help us protect what we value most”. We shall see later this year.

Meanwhile the takeaway line from the SNP leader’s speech, “let’s resolve to put Scotland in the driving seat”, like the conference slogan “PROGRESS”, was vague and eminently forgettable, while there was also a weirdly hubristic section which implied the party might remain in government for “the next ten years and beyond”. Old political hands will know where that sort of talk leads.

Nor was there anything that lived up to the first minister’s noble aim to deliver “transformational” responses to “generational” challenges. The childcare pledge is, of course, worthy and important, but hardly a step change. The SNP still suffers (like Labour) from promising the world but inevitably failing to make good on the free unicorns.

Sturgeon also had some comments in response to recent events. The European Union, she told delegates, wasn’t “perfect” and had, in the case of Spanish police actions in Catalonia, failed to live up “to its founding values of human dignity, freedom, democracy and equality”.

Indeed, there was quite a bit of EU bashing at this SNP conference, surprising for a supposedly Europhile party but less so when you consider its need to decouple its core aim from Brexit. “The case for independence doesn’t depend on Brexit,” the SNP leader said. “But Brexit does show us what can happen when we don’t control our own future.”

Sturgeon elaborated by reflecting on what she called “three defining moments” in which Scotland’s interests had “been cast aside” by a decision taken at Westminster. First was the failure to establish a North Sea oil fund in the 1970s, second was the imposition of “austerity” following the financial crash and third was Brexit. “Just think if those decisions had been taken in Scotland,” pondered the first minister. “The difference could be dramatic.”

Elsewhere at conference, the Scottish government minister Mike Russell repeatedly referred to Brexit as “a fantasy led by fanatics”, a brave line which invites an obvious rejoinder. He and others, of course, don’t see the comparison, to them, the difficulties posed by the UK’s departure from the EU will eventually provide an opportunity to reignite the independence flame. But for now, the party – as evidenced by Sturgeon’s speech – is firmly in wait-and-see mode.