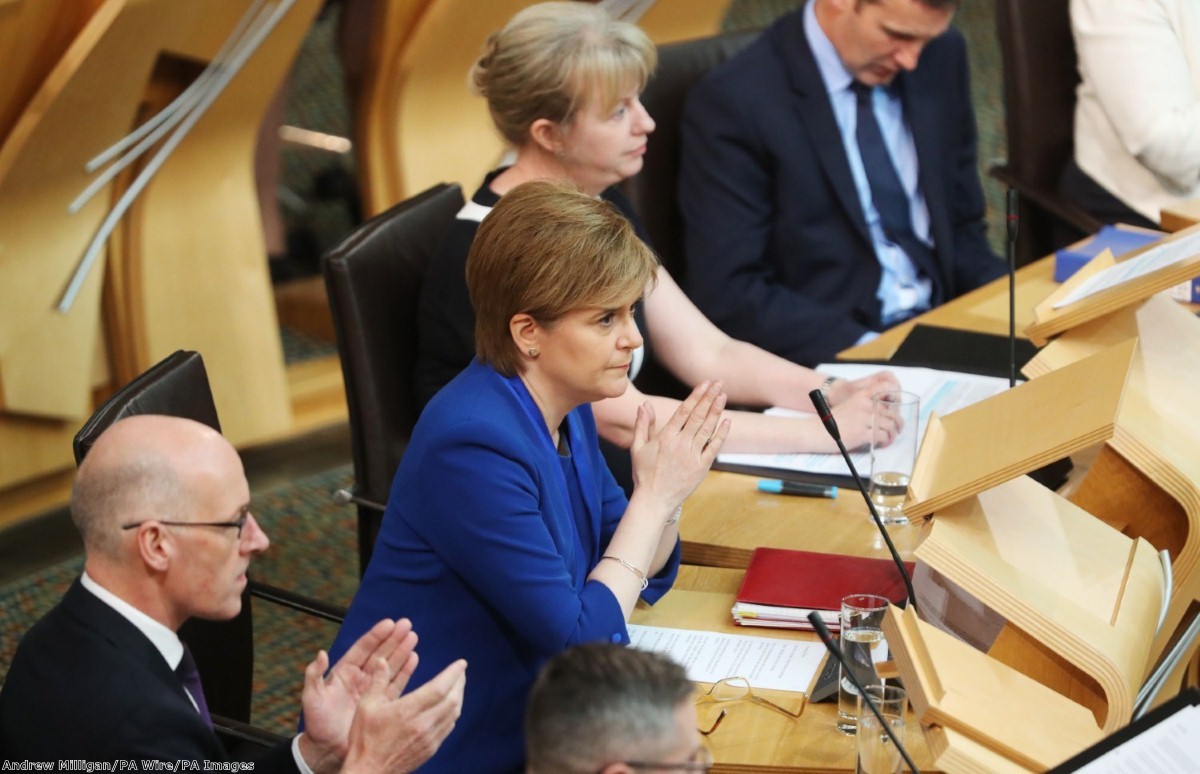 Indyref2 is still on the table

Like Aesop's mountain, we're led to believe, Nicola Sturgeon has spent the days since the general election labouring, or rather "reflecting", on the future of independence. Various groans and noises were heard as to what this might entail, and finally MSPs, journalists and members of the public gathered this afternoon to hear the outcome. But in spite of all the noise, the mountain brought forth a mouse.

In essence, the first minster barely budged an inch. It remained her view, she told the Scottish parliament, that voters should have a "choice" at the end of the Brexit process, while by any democratic "standard" the Scottish government's mandate to hold a second referendum was "beyond question".

Finally, the mouse got to the nub of the matter. When to exercise that mandate, however, was a "matter of judgement". The first minister, therefore, planned to "reset" her March statement, not seeking to introduce legislation for another referendum (as previously planned) but instead "redoubling" her efforts to influence the Brexit negotiations. And at the end of that period, likely to be next autumn, she would come back to parliament and make a judgement on when to give voters that choice.

So apart from the timescale – previously a six-month window between October 2018 and March 2019 – nothing much has changed, Sturgeon's "reflection" having resulted in little beyond a minor change to her previous strategy. There was also a second strand to the first minister's remarks, a summer plan to "refresh" the SNP's vision for the country it leads. It has, after all, now been in devolved government for more than a decade.

To shore up this rather thin gruel, Sturgeon drew upon findings from what appeared to be a private focus group. People in Scotland, she boldly predicted, would "increasingly demand" another referendum as the stark reality of Brexit became clear (they haven't so far), and the observation that beyond hard-core groups of Nationalists and Unionists, there was actually a degree of "commonality" among the majority of Scots, a desire to see how things pan out. It seems unlikely we'll see any data to back up that view.

There were few rhetorical fireworks. Most of the first minister's statement consisted of the usual tropes about "rebalancing" the Scottish economy, strengthening democracy, achieving social justice, and so on. In other words, the life appears to have gone out of Sturgeon, her party and its dream of independence. Her words were greeted by derision from opposition MSPs, glum faces and dutiful applause from her own backbenchers.

Ruth Davidson, the Scottish Conservative leader, will be delighted. Although she's repeatedly called for the SNP leader to take indyref2 off the table, of course she didn't mean it, for that would rob her of a salient attack line up to and including the 2021 Holyrood election. Scottish Labour leader Kezia Dugdale, who now specialises in rather personal imagery, accused Sturgeon of "digging in her heels", while the Scottish Green co-leader Patrick Harvie said she should ignore Unionists and carry on regardless.

To be fair, Sturgeon was in an impossible situation, required to contrive a way of simultaneously keeping indyref2 both on and off the proverbial table. But once again she evoked Theresa May in failing to judge the political mood. Once viewed as "cautious" politicians, both recently threw caution to the wind and lost, the prime minister with her snap general election and the first minister with her demand for a second referendum. And both, as remains clear, are still struggling to navigate the aftermath.