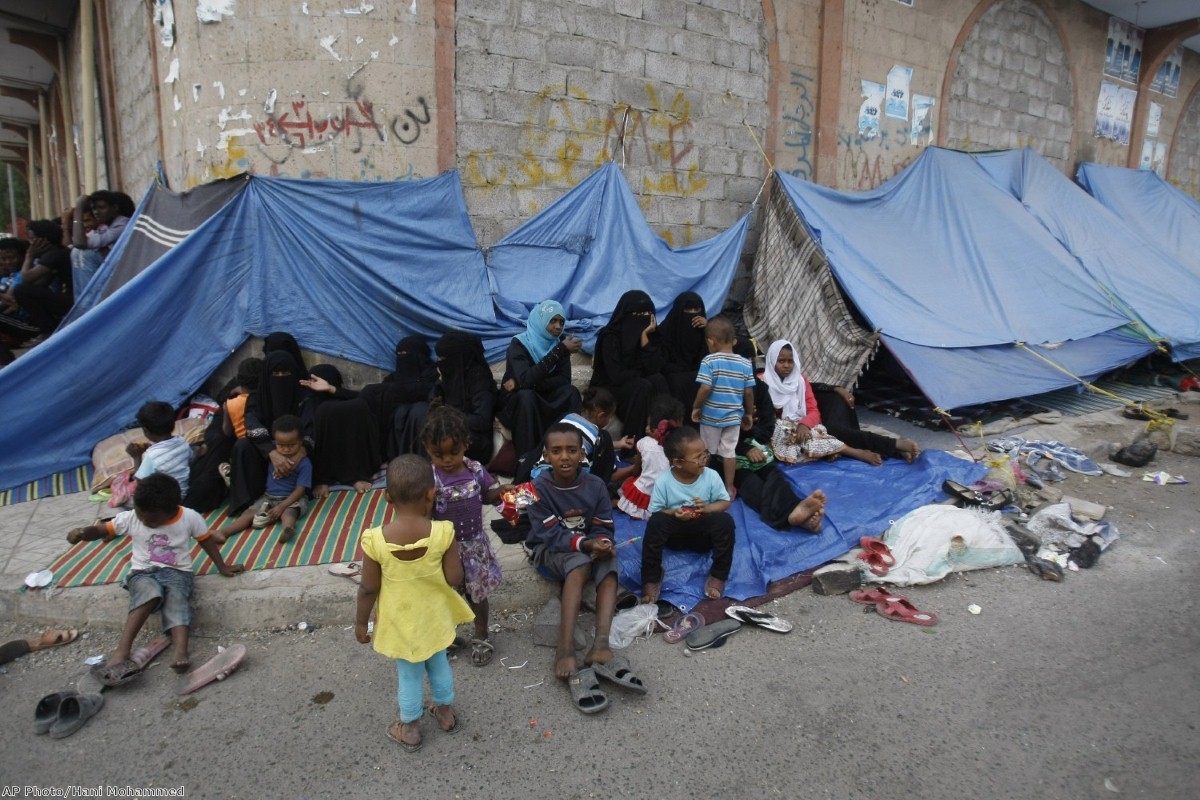 It was roughly twelve months after 31-year-old Gebre Berhane (not his real name) escaped Eritrea that the letter came through from the Home Office. He'd already lost 13 years of his life to forced military service and faced the threat of a regime which he says kidnapped his father turning on him. Berhane was sure his request for asylum would be accepted and his nightmare would come to an end.

"The Eritrean government were looking for me because they believed I was contacting foreigners," he says, explaining the case he put to the British authorities. "In my extra time I was supplying vegetables to a big company which made them suspicious. When we heard that they were looking for me, I fled. It's been 15 years since my father was taken by the government. My mum said: 'I don't want to lose you too, go away from this country'."

But Berhane's story wasn't good enough for the Home Office, at least not at the first time of asking. Last summer, after months waiting for an interview, his asylum claim was rejected. The days he'd spent trapped in a migrant jail in Libya, the hours rocking on a packed boat to Sicily, and the month hopping from truck to truck in Calais  – all in the hope of reaching England – appeared to have come to nothing. "Something came into my mind," he says, recalling how he felt after reading the rejection. "If they are planning to take me back home I am planning to make suicide. Imagine you have come all the way and risked everything and they take you back to the Eritrean government – our enemy."

Left with no other options, Berhane appealed the decision. For six months he waited in G4S-run asylum accommodation in Leeds until good news finally came: a judge had overruled the Home Office and Berhane was being offered asylum. For the first time in months he says he "felt relaxed". But with many of his Eritrean friends now going through the same process with the Home Office, an important question remains: why was a vulnerable refugee from the country dubbed 'Africa's North Korea' rejected in the first place?

In the past the British government was more than happy to recognise Eritreans – the largest group to claim asylum in the UK in 2015 – as people in need of protection. And for good reason. Since its independence 23 years ago, Eritrea has been ruled by the same president, Isaias Afwerki, in a repressive, one party state accused by Human Rights Watch of "widespread and systematic violations of human rights and fundamental freedoms".

But in March 2015 the UK's position on the country suddenly changed after the Home Office published updated country guidance suggesting a marked improvement in Eritrea's human rights situation. The acceptance rate for Eritrean refugees promptly plummeted from 84% in 2014 to 44% in 2015.

The source for this controversial change was a report published by the Danish Immigration Service back in November 2014 which claimed forced military service – the main reason people leave the country – was no longer indefinite, and that anybody fleeing without permission would be welcomed back so long as they signed a "letter of apology" and paid a "diaspora tax" on the money they had earned while abroad. Human rights groups disagreed, arguing that military service remains compulsory and indefinite, and that returned refugees are at serious risk of persecution. Even the report's own authors were horrified by what the final version – based largely on anonymous diplomats – said. Two resigned and it was eventually discarded by the Danish government. "The report was so simplified that it hurt," one of the authors, Weise Olesen, said.

It is a view that British judges appear to share. Data obtained under the Freedom of Information Act shows that from March 2015 – after the changes were introduced – to September 2015, 1,006 out of 1,179 Eritreans rejected by the Home Office decided to appeal. Of the 118 cases in progress under the same time period, 106 were allowed. That's an appeal success rate of 92%, way above average. Not everyone was so lucky. One hundred and seventy three decided not to lodge appeals, nine were rejected on appeal and 17 were removed back to Eritrea by force – but by and large judges appear to be finding against the government.

"Judges haven't been able to understand why the Home Office has continued to use the Danish report because there are so many criticisms of it," says Nathan Stevens, an immigration consultant for Duncan Lewis Solicitors, which has worked on ten cases since the changes came in last year. "Clearly it doesn't meet standards that would be required of a report to be accepted as a change in country condition." Stevens explains that while judges are obliged to take the country guidance into account, existing case law from a 2011 tribunal ruling clearly states that Eritrea is not a safe country. That ruling, he adds, is "a decision of the court itself", meaning judges – by the law of precedent – are required to follow it. "It's an irrational situation really that judges are being asked to go against precedent."

On top of the harm caused to the small number who have been sent back to a dictatorship, those left waiting for appeal decisions in the UK are under huge strain. Even with the prospect of a successful appeal, confusion and fear is rife. "A lot of them attend churches and mosques and they speak to people in the Eritrean community that have been living here for a while," Stephens says. "They are completely confused about why, when in their view nothing at all has changed or improved in the country, they suddenly aren't being granted."

Eritreans appealing asylum decisions are still entitled to basic accommodation and financial support but without the ability to work or study, and with just £36.95 a week to eat, travel and socialise, they are being left in limbo for a prolonged period of time while they wait for a hearing. "It was very difficult," Berhane recalls. "You can't contact your family because you don't have money. The Home Office gives you only £5 per day. It's not enough. You can't work, you can't travel if you want to relax or visit something. You spend your time on your own, which makes you depressed."

Another consequence according to Stephens is the amount of time and public money wasted on unnecessary legal procedures. "It's really clogged up the tribunal and has delayed everyone else getting to court," he says. "You would usually wait a month from lodging an appeal to your hearing but now it's six. There's a massive amount of cost on the public purse too given [refugees] could be working if they were granted status.

"They have to have to have an interpreter, which costs money. Judges are obviously paid and the legal aid fee will probably come to £1,000 for each case. It's completely unnecessary given that everybody has been granted on appeal. It's just money from the public purse being wasted."

In January a review into the Home Office country guidance by the Independent Advisory Group on Country of Origin Information (IAGCOI), argued the new guidance was "completely divorced from relevant objective evidence" and "totally lacking credibility". That was after another IAGCOI review published last year which also heavily criticised the Home Office. So why is the department ignoring its critics and persisting with something which appears to be largely failing?

In a statement a Home Office spokesperson said: "The UK has a proud history of offering asylum to those who need it. All Country Information and Guidance is based on a careful and objective assessment using evidence from a range of sources including media outlets; local, national and international organisations; and information from the Foreign and Commonwealth Office. While this guidance helps inform asylum decisions, every application is considered on its individual merits.

"The Home Office issued two responses to the IAGCI-commissioned review of our Eritrea country information and guidance: One questioning the impartiality and objectivity of the review and, as is standard, a more detailed response to the review itself in which we rejected large parts of his recommendations."

Many disagree. Stuart Crosthwaite, a migrant rights campaigner with South Yorkshire Migration and Asylum Action Group, cites two reasons: "It’s an attempt to stigmatise Eritrean refugees as 'bogus'," he says. "A precursor to increased trade deals with the Eritrean government, especially in mining and oil exploration. The former Tory leader Michael Howard seems to be involved in this process”. Stephens believes it acts as significant disincentive for Eritrean asylum seekers regardless of its actual efficacy. "I think with the Home Office it's almost a perception thing," he says. "They want it to seem like the UK isn't a good place for Eritreans to try and claim asylum and they are hopeful the numbers will be reduced as a result."

If this is the goal it is unlikely to succeed, Berhane believes. "The reason most people are choosing to come to England is the language," he says. "I was learning back home in English so it will not take me a long time to be connected to the people." Though many of his friends in Eritrea and the UK remain uncertain of their future, with his application finally granted Berhane hopes he can now join a college, use those language skills and put the past behind him.

Philip Kleinfeld is a freelance multimedia journalist based in London. His reporting on refugees and more can be viewed here. Follow him on Twitter here.