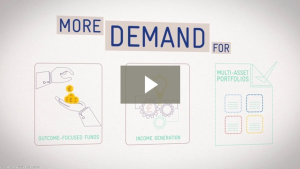 Growth of the UK asset management industry has been extremely strong in recent years; particularly among authorised funds, which have trebled in a decade.

*Data for France and European average sourced from EFAMA 2013 data.

In 2014 we saw growth in UK asset management outpace that of any other country around the world.

The UK also remains the biggest centre in Europe, second only to the US internationally.

Our latest annual industry survey shows that total assets under management were up 9% year-on-year to £5.5 trillion.

Pensions remain the biggest client type with £2.1 trillion of investments managed in the UK on behalf of pension fund clients around the world.

Altogether, overseas clients represent 40% – or £2.2 trillion – of what we do.  Around £1.2 trillion of that is for European clients.

Actively managed portfolios still represent the majority of the market, but the demand for passive strategies continues to grow with their market share increasing year-on-year since 2006.

With a global reach, the UK is well placed as a centre for excellence in investment management.

So, what does the future hold?

The transformation of the pensions landscape has opened many doors for investment managers and savers alike.

The influx into Defined Contribution schemes through auto-enrolment, together with the new pension freedoms, means that managers are now more visible than ever in the pensions market.

Over the last five years, we have gone from an environment where annuities were effectively compulsory to a new landscape with much greater choice.

Pensions freedoms also mean that people will have to take more of an interest in how their funds are invested, changing the dynamic between savers and their
investment manager.

The shift in client expectations and changes to the political and regulatory landscape mean that UK investment managers will be under the spotlight more than ever before.

With this challenge, comes great opportunity – but even more importantly great responsibility.

The Investment Association is working with it's members to make investment better for savers, companies and the economy.