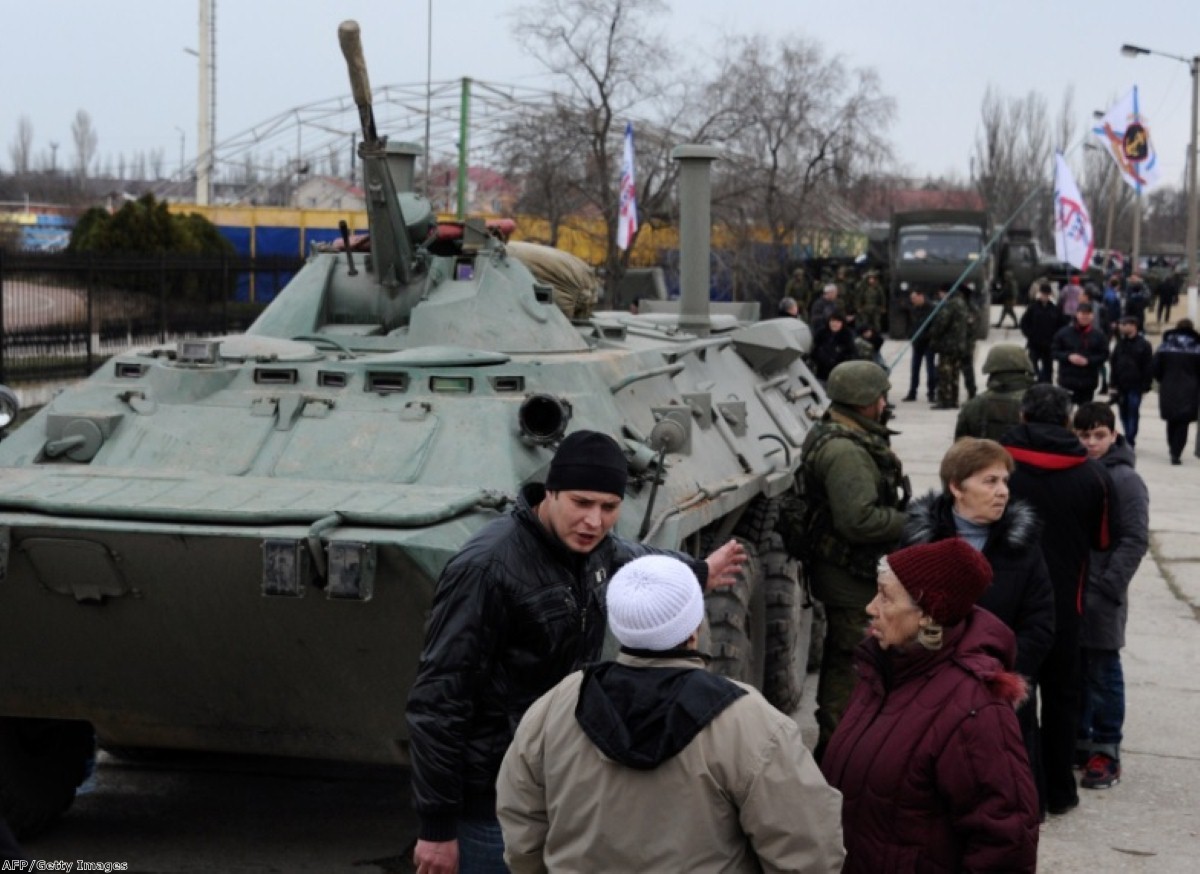 Britain's cross-party unity over the UK's handling of the Crimea crisis has been shattered by a Labour demand that Russia should be suspended from the G8.

The opposition wants Britain to produce a detailed timeline of diplomatic moves against Russia if Vladimir Putin does not soften his position over the ongoing situation in Ukraine.

But Labour's call is being resisted by the Foreign Office, which is refusing to commit to a specific deadline for Russian cooperation.

Shadow foreign secretary Douglas Alexander made the demand after William Hague told BBC1's The Andrew Marr Show that there would be economic, financial and trade consequences of Russia "continuing to make the situation worse".

"They have taken possession of the Crimea, but I would argue it would be in Russia's interest, faced with these short-term and long-term consequences, to enter into a diplomatic process with Ukraine supported by other nations," the foreign secretary said earlier.

Hague is holding talks with US secretary of state John Kerry later today to discuss the west's response to the Ukrainian crisis.

The international community is attempting to persuade the two sides to resolve the situation diplomatically, but Hague conceded the Crimean local government's planned referendum on returning to Russia, and Russia's refusal to allow monitors from entering the region, were "closing down the diplomatic space".

Now Alexander has gone much further than Hague in calling for Russia's suspension from the G8.

"The priority in Ukraine must be a de-escalation and a diplomatic resolution to the crisis," Alexander said.

"So I welcome that the foreign secretary made this clear to the BBC this morning when he confirmed that all economic and diplomatic options should remain on the table in seeking to achieve that.

"It is also vital that the UK, along with EU allies, sets out a clear timetable for taking further economic and financial measures if Russia fails to change course in the days ahead.

"The UK should also work with the group of the world's seven largest economies to agree to suspend Russia from the G8 if it refuses to agree a diplomatic resolution to the crisis."

The other G8 nations have already suspended their participation in preparatory talks ahead of this year's next G8 summit, to be held in Sochi.

But removing Russia from the group would constitute a humiliation for Vladimir Putin which could end up prompting a much more severe breakdown in diplomacy with Russia.

"In light of developments, we are reviewing our overall position on G8 participation," a Foreign Office spokesperson said.

"We are also considering what further measures we might take to increase diplomatic pressure on Russia if it does not de-escalate the current unacceptable situation."

Labour disagrees. An opposition source told Politics.co.uk Russia has become much more integrated into the global economy since 2008, and is therefore more vulnerable to economic pressure now than it was when it invaded South Ossetia six years ago.

On energy issues, Hague said there would be a "re-casting of the European approach" if Russia continued down its current path.

Any concerted attempt by Europe to reduce its reliance on energy supplies from Russia would significantly damage the Russian economy.

Some have called for Russians living in Britain to face consequences for Putin's actions, but Hague ruled out any such moves this morning.

Labour is also seeking a suspension of the process which will see Russia join the Organisation for Economic Cooperation and Development.

Meanwhile, moves towards establishing a visa system for Russian nationals visiting the EU have been suspended.

While the danger of a military confrontation has subsided the situation in the Crimea appears to be turning into "another frozen conflict" in Europe, Hague said, like the unresolved situations in South Ossetia and Abkhazia.

"He [Kerry] made clear that continued military escalation and provocation in Crimea or elsewhere in Ukraine, along with steps to annex Crimea to Russia would close any available space for diplomacy, and he urged utmost restraint," a US state department spokesperson said.