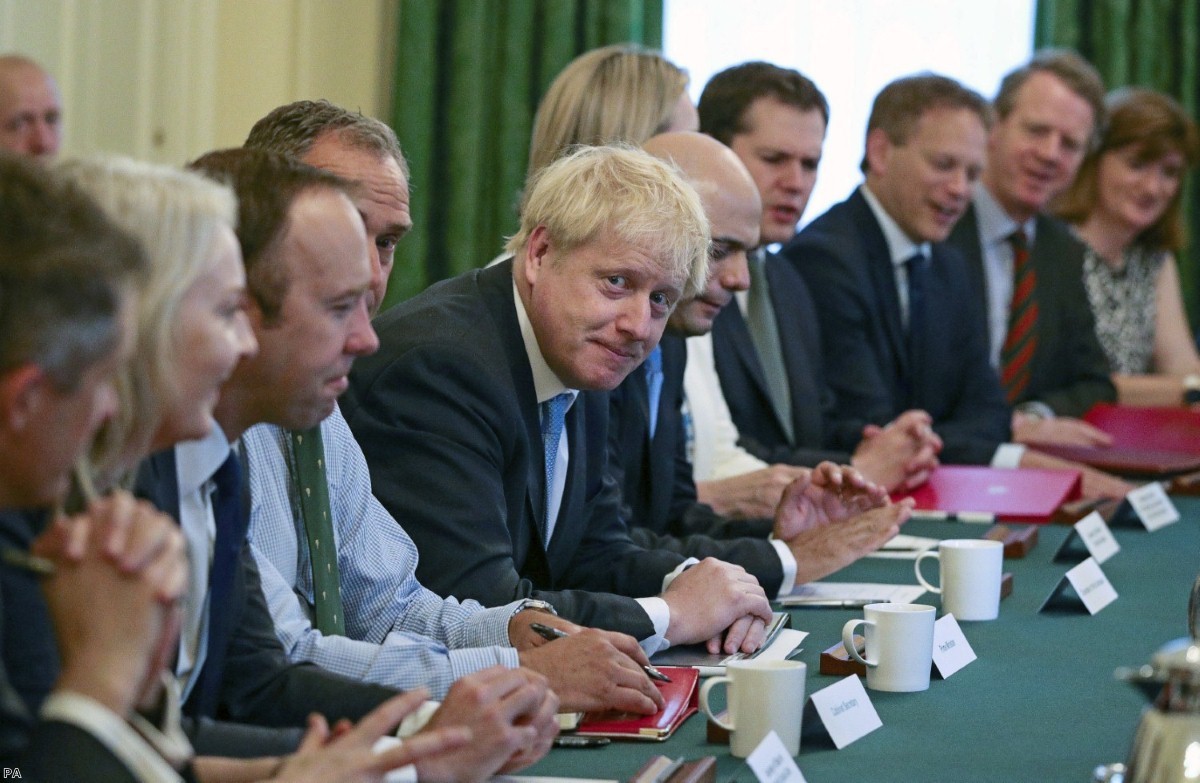 Everything but Brexit: What Johnson’s Cabinet means for the country

Boris Johnson's new Cabinet has been analysed almost entirely through the prism of Brexit. Given the political context and the identity of his new ministers, this is hardly surprising.

Nevertheless, Johnson is clear he wants to put a broader agenda to the public. Even amid the chaos of Brexit, ministers can pursue policy shifts. But that said, whereas David Cameron's first Cabinet included ministers with long-planned reform agendas – Michael Gove's free schools, Andrew Lansley's NHS Bill, Iain Duncan Smith's Universal Credit – Johnson's appointments smack more of loyalty, patronage and Brexit strategising than anything else.

But with deficit reduction apparently now on hold, ministers are likely to have more room to manoeuvre than their predecessors. These are now the most powerful people in the country. What will they do with it?

Johnson's choice of chancellor could prove to be one of the most meaningful in memory. While both Sajid Javid and Liz Truss rose through the ranks as small state ideologues, at this point in their careers Javid is by far the more willing to spend money. Had Truss been appointed chancellor, the likelihood of significant infrastructure spending would have receded fast. Johnson gave the job to Javid for a reason.

Which Saj is the real one? The Ayn Rand small-state diehard, or the man who, as Stephen Crabb's anointed chancellor in his 2016 leadership bid, pledged £100bn of debt-funded public spending on infrastructure?

Johnson is now pledging to halt deficit reduction and spend on schools, police and the NHS, whilst also pledging big tax cuts. Supposedly this will be funded by the money saved on EU contributions – but that's just fantasy. Will Javid toss Tory deficit targets out of the window? Will he accept the tax giveaways to high-earners Johnson is promising? Or will he turn out to be another Treasury deficit hawk?

Significantly, Matthew Elliott has been brought in as Javid's adviser. Elliot co-founded the Taxpayers Alliance, the fanatically ideological, covertly funded think tank that built much of the media hysteria against public spending a decade ago.

Public infrastructure is set for an overhaul – that much is certain. But what Javid does on tax and public service spending will decide his relationship with his boss, his party's survival, and the country's future. The early signs are that the taps will bring forth a trickle, not a stream.

Matt Hancock sold his soul to save his job. While he's obsessed with elevator pitches for gimmicky health apps, the NHS urgently needs more money.

The government is already committed to increasing NHS spending over the coming years – but this is predicated on a reform agenda centred on controversial 'Sustainability and Transformation Plans' that often include hugely unpopular hospital cuts and closures.

Johnson, forever marked by the infamous £350m Leave campaign pledge, will back extra NHS spending – though its adequacy to meet current and future needs is doubtful. In his first speech as prime minister he pledged 20 new hospital upgrades. That suggests that investment in the health service's crumbling real estate is coming – particularly in Leave-voting target seats.

The new prime minister has also backed social care reform, based on building a cross-party consensus behind a market social insurance system to fund care long term, plus a promise that people will no longer need to sell their homes to fund their care.

This is far too big to pull off until Brexit is fully resolved. If it happens at all, it won't be until long, long after October 31st. Social insurance also won't address needs for the next ten years, and the existing system needs new money fast.

And anyway, the chances of cross-party consensus on care reform are minimal – political attacks sank care reform plans in 2009 and 2017, and with Jeremy Corbyn's Labour party seeking to bring care closer to the tax-funded NHS rather than resorting to marketised insurance models, they will likely do so again.

While the schools sector scratches its head over what Gavin Williamson is doing at the Department for Education, the big questions will be for No.10 and the Treasury. We know that higher spending on schools is coming, but how much and in what form?

His first pledge was a paltry 0.1% increase in spending that would have solved very little. After that was ridiculed for its inadequacy – and in a sign of making policy on the hoof – he then upgraded it to a pledge to reverse all cuts to school funding since 2015 by the year 2022. That much meatier promise will cost nearly £5bn a year – but halting deficit reduction gives him the room to pull it off.

What he hasn't addressed is the crisis in special needs education, which is sinking council finances and cutting children adrift. Williamson is not top of the list of people you'd choose to deal with it.

Another soul-seller. The fact Amber Rudd kept not just her Cabinet rank but also her department in Johnson's brutal reshuffle suggests he has no particular agenda of his own here. Rudd has focused on tweaking the Tories' catastrophically broken benefit system, amending Universal Credit and policies such as the two-child limit to avoid some of the worst headlines without actually changing direction.

What the welfare state really needs is almost wholesale reversal of the last ten years – but that's not happening. At best, Javid might allow Rudd the money to scrap the damaging five-week wait for Universal Credit that drives so many claimants to destitution. Or he might not. Watch out also for Rudd's plan to merge the assessment process for the two main disability benefits – another shambles waiting to happen.

We know public transport investment is on its way. The big questions are what projects and where. Doubts permeate the future of HS2, especially with a small Commons majority and restive rural backbenchers along the planned route. Meanwhile, northern cities are likely to receive a hefty share of new spending, given the post-Brexit politics of transport spending – and the location of Tory target seats. However, lofty pledges and future plans may mean nothing unless new transport secretary Grant Shapps can get to grips with Britain's rail network, whose fragmentation has caused so much misery for commuters in recent years.

Esther McVey is an appalling choice as housing minister – a small-minded benefits-basher with a record of incompetence and ignorance, who owes her job to being fanatically pro-Brexit. Reversing housing benefit cuts is key to solving the housing crisis, but don't expect McVey to notice.

England essentially has two housing crises – middle class millennials can't afford to buy a house, especially in the south east, while housing benefit cuts and minimal social housebuilding has fuelled a homelessness crisis. The latter is more urgent, but the former is more critical to the Tories' election prospects.

David Gauke's plan to scrap short prison sentences meant he was one of the few members of May's Cabinet with a progressive policy agenda. His replacement at the Ministry of Justice with centrist prisons minister Robert Buckland gives reason to believe this will continue, provided hardline home secretary Priti Patel doesn't try and intervene.

It seems a lifetime ago that the Tory leadership contest found itself swamped with the most cringing drugs 'scandal' in history. But for all the evident hypocrisy of Britain's drugs laws, it would be a surprise for any government with Patel at the Home Office to significantly relax prohibition.

As for Patel's previous support for the death penalty – there's no bringing that back without leaving the European Convention on Human Rights.

Arch neoliberals such as Liz Truss and Priti Patel are not occupying roles that give them the opportunity to slash workers' rights. That said, Theresa May's hopelessly unfulfilled agenda of protecting gig economy workers and putting workers' representatives on company boards is likely to die a swift and quiet death.

On what may be the hottest day in Britain's recorded history, cool yourself down with the knowledge that there is no sign either Johnson or his pro-fracking new environment secretary Theresa Villiers give a rat's backside about climate change.