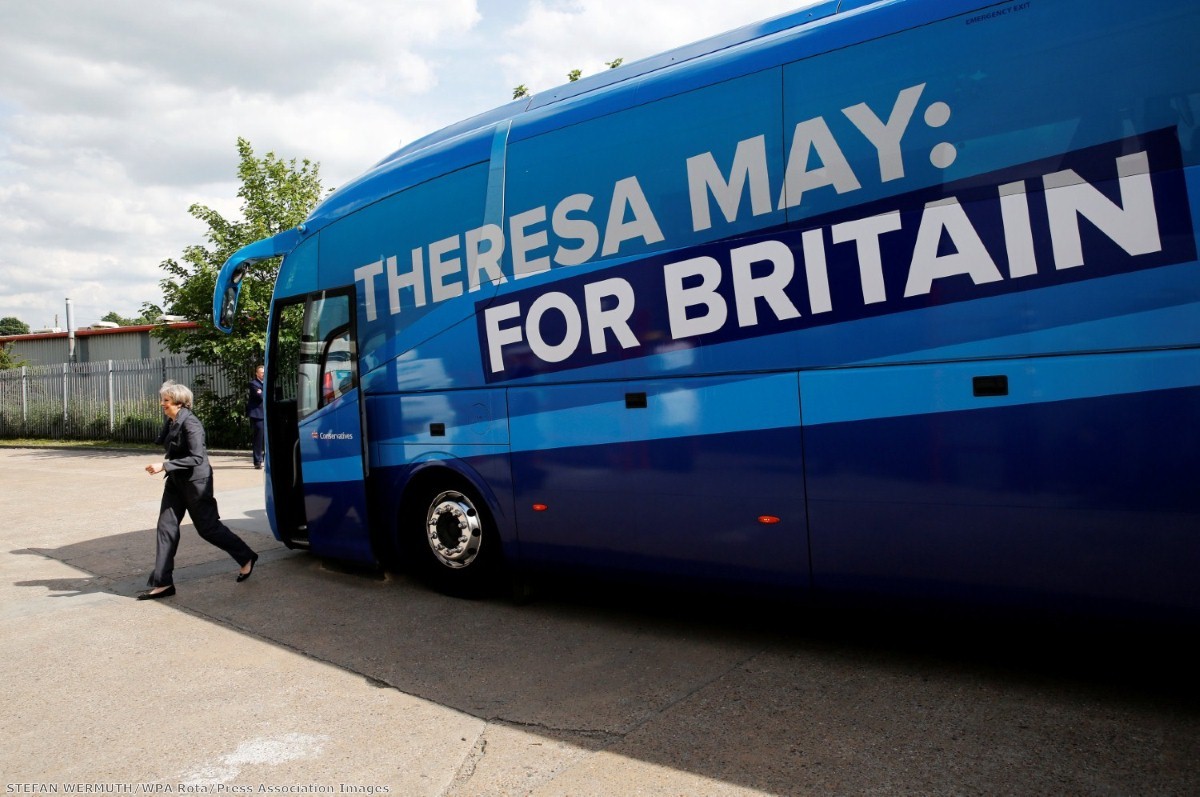 Fears of Tory dominance fade as voters begin to doubt May

At the start of the election campaign you could to speak to just about any Conservative or undecided voter and hear nothing but praise for Theresa May. Skip forward a few weeks and the 'I trust her, she's a strong leader' has changed to 'I'm not happy about…'

When I spoke to older Conservative voters in the East Midlands town of Northampton just after the manifesto launch, almost all of them mentioned the party's disastrous social care policy. They weren't happy about it.

"Pensioners seem to be promised one thing and then it's taken away."

"I'm really not sure about all this social care stuff."

"I need to hear more details about her plans for pensioners but I'm really quite concerned."

At the time, most people said that despite their concerns they would still be voting Tory. But things haven't improved for May since then. If anything they have got worse. She's received criticism for refusing to take part in face-to-face debates with other party leaders and has come under fire in the last couple of days over cuts to policing during her time as home secretary.

Local Conservatives in Northampton are confident they will hold their two seats in the town – they currently have around a 3,000 majority in each – but one party source admits they are far from happy with the national campaign. "Things have been going well locally," they said. "I just wish I could say the same for the national campaign."

Meanwhile, Labour sources in the town say there has been a noticeable change on the doorstep. "We've seen lots switching to Labour over the last 48 hours, it could be close," one said on Saturday.

Another said that while it remains hard to call, the mood on the doorstep is better than in 2015 with the Labour vote seeming firmer. "There's also been some switchers, including from Tory to Labour," they said.

I've found the same when speaking to people in other Midlands seats, particularly among women. Compared with the start of May, women are now seven points more likely to vote Labour than men – and three points less likely to vote Conservative.

"I've been Conservative all my life," a 76 year-old widow in Nottingham told me last week. "But I'm worried about the social care plans and means-testing for the fuel allowance.

"I really rely on that. I don't know if I would lose it or not because they haven't said anything about what the amount will be. I'm going to spend the next few days really looking properly at Labour's ideas."

Another thing that has come up repeatedly among the older women I have spoken to is the free bus pass, even though there's been no mention of any changes to it. There seems to be a worry that once cuts to universal benefits begin, they will spread to other areas.

"I haven't heard anything about the buss pass going but I'd be lost if it did, I use it all the time," one woman told me.

At the start of the campaign I visited the Birmingham constituency of Erdington. Despite being seen as a safe Labour seat, there was lots of talk that the Conservatives would be targeting the area. What struck me then was the number of people I met with views that you would usually associate with Labour – concerns about food banks and homelessness – who were planning to vote Tory.

I went back to Erdington last Friday and there was definitely a change. There seemed to be a lot more support for Labour this time. People said things like: 'We're all Labour around here' and asked if I'd managed to find any Tory voters. There were even some former Conservative voters saying they had been put off by Theresa May.

"I voted for them before but I don't like all her scaremongering on Brexit," one woman said. "I'm going with Labour now."

A couple in their 30s stopped to talk to me. The woman voted Conservative at the last general election, the man Ukip.

"I started off thinking I'd vote for the Conservatives but I don't like the stuff about dementia," the woman said. "My dad has just been diagnosed with Alzheimer's. It's not just about him but all the other people like him."

In a clear example of how unpredictable this election is turning out to be, the pair were very hard to place on the political spectrum. The woman had been a teenage mum and now worked in an administrative role in the public sector. The man was a warehouse worker. They both admired Donald Trump but also Emmanuel Macron. "We need an outsider like one of those," the man said. The woman suggested Corbyn was our version of that, the man was unsure. They both wanted to bring back the death penalty and national service. The woman volunteered at a homeless shelter and was strongly against disability cuts but they were both angry about 'benefit scroungers'. They were supportive of immigration because "immigrants work hard". The woman said she was voting Labour, the man said he was still unsure but would like to see a coalition to keep things more balanced.

This election was Theresa May's to lose. The expectation was that she would glide through it and return a huge majority for her party. That could still happen of course, but whatever happens on June 8th it's clear she has been damaged by the last few weeks. Where once people saw a strong leader, now they see somebody who they're not sure they can trust.