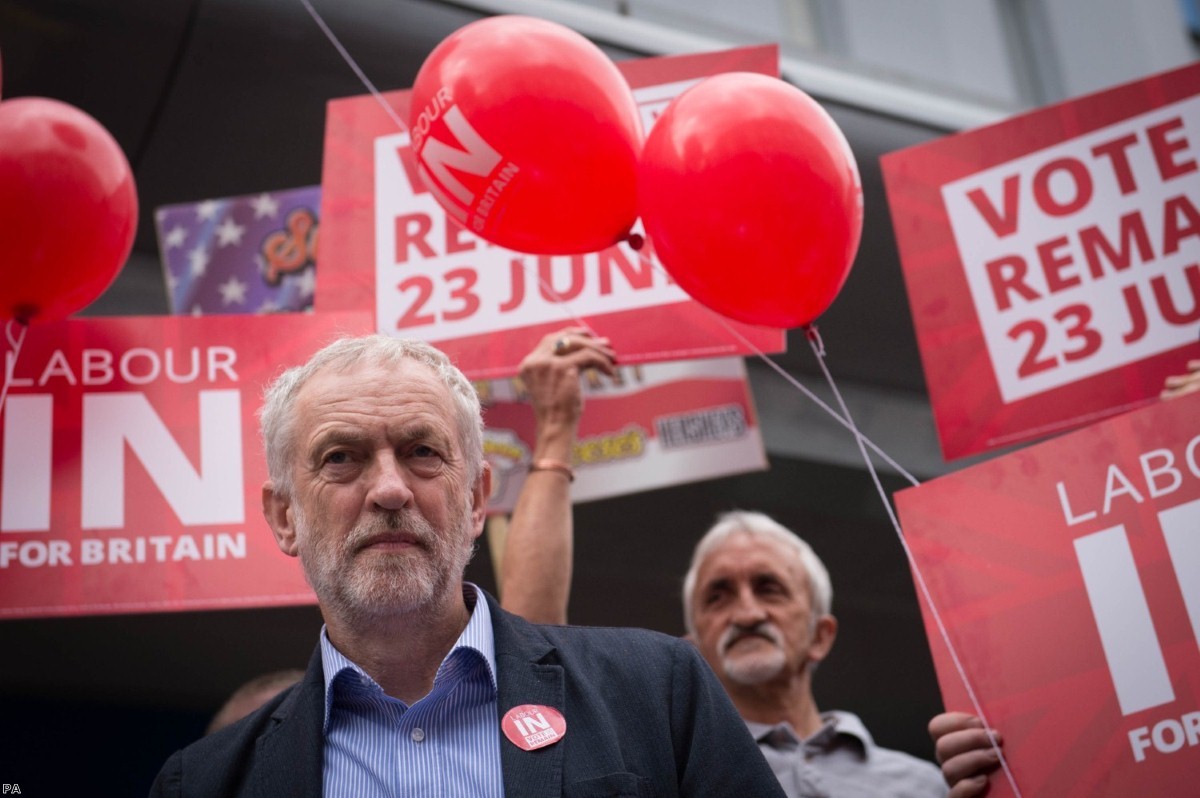 Jeremy Corbyn’s reluctant EU campaign has made Labour an irrelevance

We are now just two weeks away from the most important vote the British people could face for generations. If Britain decides to leave the EU, it will permanently change the course of our country's future. Not only will the result determine our role in the world, it will have massive implications over our future economy, trading relationships, immigration system and much else besides.

It is also a defining moment for our political leaders. If David Cameron loses he will almost certainly face a leadership challenge. Within weeks there could be a new leader of the Conservative party and a new prime minister in Number 10. Depending on the result, the Tories could be about to unite around a popular new leader, or face total implosion. This is a rare moment in British politics where everybody's votes really matters.

So given the significance of the decision on June 23rd, you might expect the leader of the opposition to be right at the front of events, driving the agenda and making his mark known. Instead, Jeremy Corbyn has been almost totally invisible throughout this campaign, save for a couple of half-hearted speeches and some low-key photo ops. When he has spoken up for remaining in the EU, it has been heavily caveated with attacks on European trade deals and the actions of other Remain campaigners.

At times Corbyn has seemed more concerned with attacking those Labour politicians who have been willing to speak up wholeheartedly for Britain's relationship with the EU, than speaking up for it himself. When the New Labour mayor of London Sadiq Khan, stood on a platform with the prime minister in order to campaign to stay in, Corbyn's shadow chancellor John McDonnell accused him of discrediting the party. When Osborne and others in the Remain campaign suggested a vote for Brexit would damage the economy, Corbyn accused them of "histrionics".

At today's Prime Minister's Questions, Corbyn devoted most of his questions to highlighting divisions within the Conservative party over the EU. Of course there's nothing wrong with that. Any of Labour's previous leaders may well have decided to do the same. But unfortunately Corbyn lacks either the political or rhetorical skills to make his attacks stick. Watching Corbyn attempt to make Cameron look uncomfortable at PMQ has become like watching a slightly confused sloth pick a fight with a wolf. It's difficult not to watch, but the result is never really in any doubt.

It's also increasingly difficult to work out what Corbyn is trying to achieve. If it's just highlighting Tory divisions over the EU, then it's a job that hardly needs doing. Since the campaign began, divisions within the Conservative party have been the only story in town. For the past two months the referendum campaign has consisted almost entirely of interminable arguments between different wings of the Conservative party, with the occasional intervention from Nigel Farage. Labour's role, if it has had one, has been that of a screen extra merely making up the numbers in the background.

Of course anyone who has followed Corbyn over the years knows that he has long been a critic of the EU. As a result, his last minute conversion to the Remain cause is about as convincing as Boris Johnson's conversion in the opposite direction. But having decided to convert, the very least he could have done is try to appear like he meant it. Instead his approach has only increased the chances that Labour voters will stay at home on June 23rd and gift the referendum to the Brexiteers. By taking such a half-hearted approach to the EU campaign, Corbyn has put the rights and opportunities of those he is meant to represent, at risk. Sadly for Labour, he has also increasingly turned the party he's meant to lead into an irrelevance.