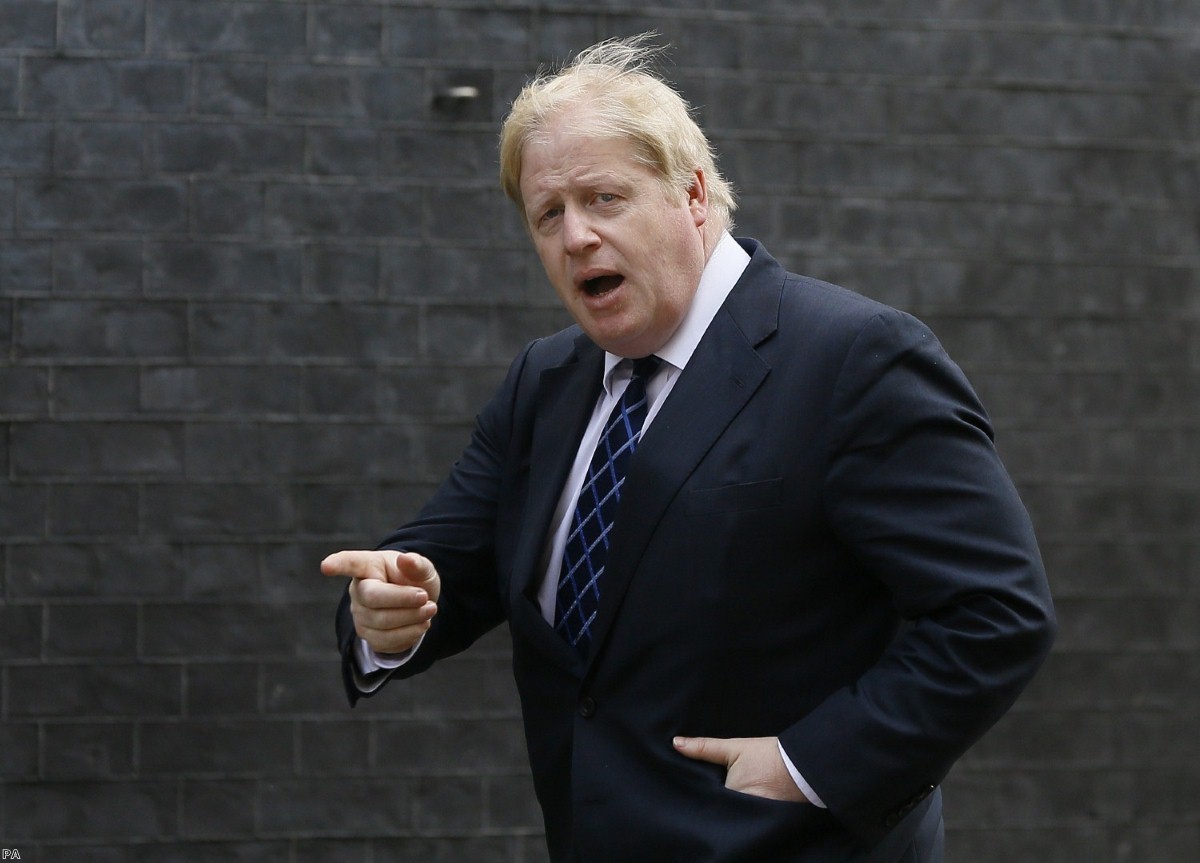 The many times Boris Johnson compared his opponents to murderous tyrants

There was much outrage over the weekend following Boris Johnson's comparison between the EU and Hitler.

Political rivals and commentators have labeled the comments "offensive", while others have questioned whether the comparison is historically valid or not.

For me this debate rather misses the point of Boris's comments which were not really about history or the EU, but about attempting to create associations between people and institutions he disagrees with and murderous dictators.

In fact anyone who has followed Johnson closely over the past eight years will instantly recognise this tactic. Whenever it looks like he is losing an argument he will wheel these comparisons out. Here are just some of the many other times Boris has made similar totalitarian comparisons in the past.

Supporters of the Euro and Hitler

Missed in the coverage of Johnson's latest comments is the fact that he has actually made quite similar remarks about the EU before. Way back in 2002 he wrote in defence of an anti-Euro advert which suggested that Hitler would have been in favour of the single currency.

In a bizarre article – which for some reasons makes repeated reference to Eddie Izzard's transvestism – Johnson wrote that "the European Union did indeed have a weird prototype in Hitler's wartime Reich" adding that: "In fact, you can only really understand the psychological background of today's experiment in economic and political integration if you understand the horror of what Hitler did in the war."

After several paragraphs drawing out the comparison he concludes that: "to say that the euro has nothing to with the war, or Hitler, is absurd. It has everything to do with Hitler, and we should be grateful to the little cinema advert for pointing it out."

It's not just the EU that gets tarred with Boris's Hitler brush. In 2014, Boris claimed that former prime minister Tony Blair had copied his speaking style from the genocidal leader of Nazi Germany.

"Listen to the way he brings them all to their collective climax: with short verbless phrases – grammatically meaningless, but full of suggestive power. It was to become a highly influential technique, copied, among others, by Tony Blair," Johnson wrote in his biography of WinstonChurchill.

Two years ago George Clooney was asked by a Greek journalist whether the Elgin Marbles, which are currently residing in the British Museum, should be returned to Greece. Clooney replied that it was "probably the right thing to do." Johnson responded furiously by comparing Clooney to Hermann Goring while promoting a "Hitlerian agenda".

He said: "And where were the Nazis going to send the Elgin marbles? To Athens! This Clooney is advocating nothing less than the Hitlerian agenda for London’s cultural treasures. He should stuff the Hollywood script and stick to history."

The justification for Boris's comparison was that "the two men look vaguely similar" and his belief that Gadaffi's management of Libya was somehow similar to Gordon Brown's decision to hold a referendum on the Alternative Vote.

Caroline Pidgeon and the Taliban

Last year Boris faced detailed questioning from the London Assembly on the procurement process for the planned "Garden Bridge" crossing the Thames. Following a suggestion by Liberal Democrat assembly member Caroline Pidgeon that the process may have been "prejudged", Boris replied that: "I find it very depressing that you persist in this Taliban-like hatred of objects of beauty." Debate over.

In an article discussing plans to set up a new elite university, Johnson claims he met a man who suggested that elite universities had been engaged in a "secret Pol Pot-style persecution of the children of the bourgeoisie." To be fair to Johnson, it's not entirely clear whether the comparison with the mass-murdering Cambodian dictator was made by the nameless man or Boris himself. However, Pol Pot is a recurring theme for Johnson.

It's not just during interviews and articles that Boris deploys his murderous dictator-based insults, but in official taxpayer-funded documents as well.  After five years as London mayor, Johnson released his 2020 vision for London, spelling out his plans for the city. On schools he suggested that he was moving away from the "Pol Pot approach" taken by governments in the 1960s and 1970s, which meant that "academically outstanding schools were extirpated under both governments, as a matter of state policy." The precise parallel between the comprehensive school system and the policies of the Khmer Rouge was not immediately apparent.

The list goes on. Over the years Boris has also compared Ken Livingstone to Kim Jong-il and compared the last coalition government's housing policies to " Kosovo-style social cleansing".

However, the debate in recent days over whether Boris's comments are "offensive" or not misses the point. Johnson is entitled to make historical comparisons, even ludicrous and deliberately provocative ones such as those above.

However, it is the repeated use of those comparisons as a debating tactic which tells us a great deal about the MP for Uxbridge. As with his tendency to use mental-health related insults (He has previously described political opponents as "bonkers", "demented", "depressed" and in one case "care in the community") Johnson's use of the Hitler comparison is deliberately designed to avoid the need to actually win debates on the force of argument alone.

Instead Johnson will do whatever it takes, from using false statistics to smearing rivals as akin to the Nazis, if he believes it will give him an advantage. This is a worrying trait in any politician. It's even more worrying in a man who is currently the favourite to be the next prime minister.