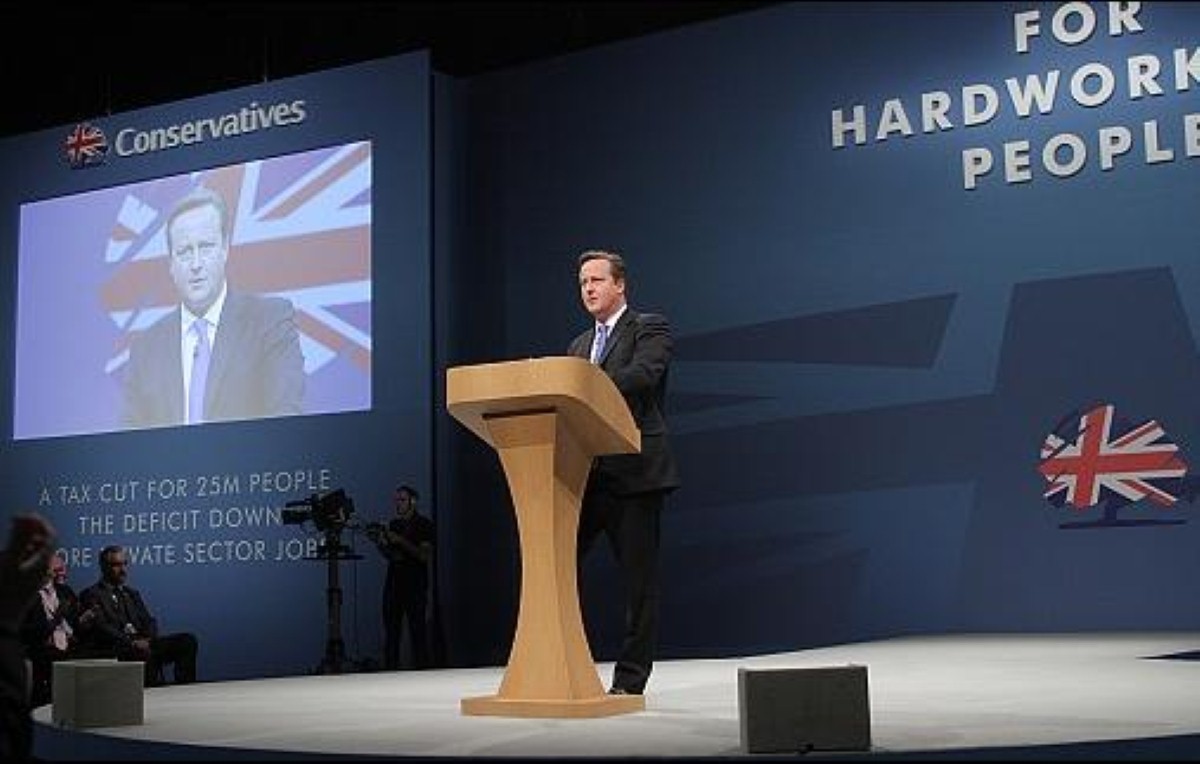 Sketch: Intense, but nothing new from David Cameron

The prime minister is in fighting mode. And it's all getting a little bit scary.

Gone are the sly asides of prime minister's questions, or the open teasing and mocking of Ed Miliband in Eton bully mode.

Instead this year's speech closing the Conservative party conference in Manchester saw a David Cameron we haven't seen much of before – coming across so earnestly it seemed almost aggressive.

In the absence of any policy announcements (on that count, this speech contained 27 pages of precisely nothing), Cameron was always going to have to work hard to keep his audience's attention.

He did so with a liberal dose of jingoism, winding up those pesky Russians and getting the entire hall to stand up for Britain's armed forces. That standing ovation felt like it was going to go on for eternity.

Cameron also let rip against Labour again and again. His standard rhetorical technique when talking about Her Majesty's Opposition is the finger-jab of doom, a gesture of condemnation which was again and again inflicted on Labour like some sort of ultimate weapon.

This wasn't shouting, but it deserved cap locks nonetheless. "DON'T – YOU – DARE – LECTURE – US – ON THE NHS AGAIN," Cameron thundered, without actually thundering. It was as if the shouting man had turned down the volume.

Again and again that jabbing left finger looked like it wouldn't mind poking Eds Miliband or Balls in the eye.

In between the faintly quivering intensity we were treated to a grand tour of right-wing policy haunts, from welfare to business.

Whereas Boris traded on some of his popularity by challenging the Tory faithful on immigration, Dave was unashamed in pressing all the right-wing buttons he could think of. Welfare: Tick! Low taxes: Tick! Free schools: Yes please!

The latter even got a nod of recognition for Michael Gove, who Cameron improbably compared to "a combination of Mr Chips and the Duracell bunny". William Hague and Iain Duncan Smith also got rounds of applause – but Cameron declined the chance to compare them to an energetic rabbit. Gove will have been pleased but also a little uncomfortable this lunchtime.

Cameron's message on the economy was a little equivocal, too. This was what George Osborne's speech on Monday could have been like: the kind of oh-so-sober grimness which has characterised the chancellor's public pronouncements for much of the last five years. Osborne was more relaxed this year, using the improving economic situation to justify a little gloating.

No such luck from the prime minister today. Those who think the suffering is over are living in "fantasy land", he told his party. This is just the sort of pep talk which will go down a treat on the doorstep. Activists attend this sort of occasion in search of a bit of morale-boosting, but there wasn't much cheer to go round in Manchester.

Cameron will not let go of his ambition of securing an overall majority at the next election. And the Tories, who have spent the week avoiding the sheer scale of the challenge ahead in 2015, are ready to fight hard for it too. So when their leader finished his most intense passage of all with a declaration that "we will be fighting head and heart and soul for a majority Conservative government", they clapped the applause of the desperate.

This was about as low-key as this sort of occasion can possibly get. The world's attention is on the prime minister and he chose to switch to default, to try and get through the day. What a disappointment. We all feel a little drained at the end of the conference season – but wasn't this taking that a bit far?

There was no atmosphere-lightening anecdote at the beginning. The jokes were as rare as a Philip Hammond smile. There wasn't even a lengthy lap of honour at the end; the prime minister (and most of his frontbench team, too) disappeared in a flash. This was not a speech to dwell on and will be forgotten in an instant. Wait, what's that over there? This looks interesting!