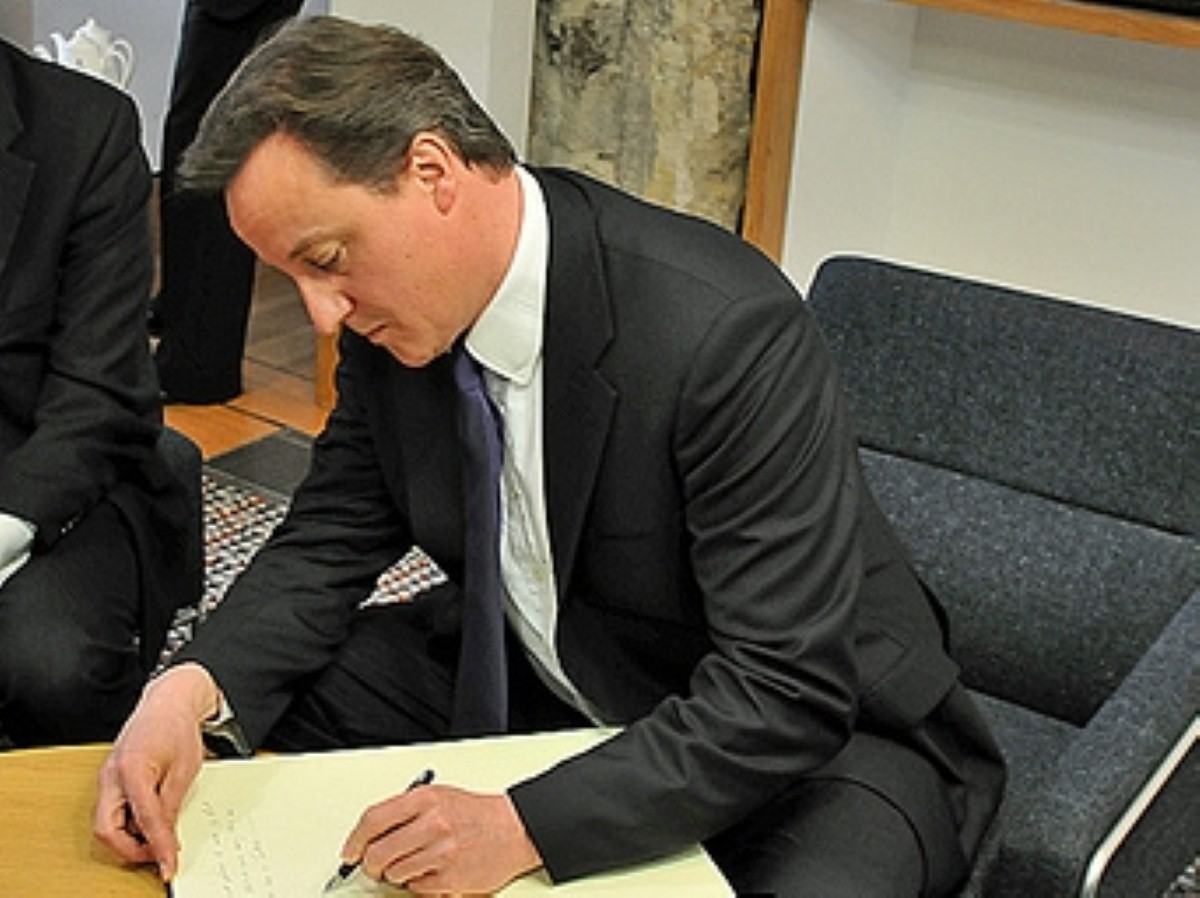 13.00 – My colleague Alex Stevenson has grabbed the following reactions to the speech from MPs inside the hall.

"It was brilliant. For years I thought the Tory party had backed opportunity, and it was really well set out. You're not in favour of opportunity if you're going to put business taxes up. [Labour] has drawn a clear line that it is anti-business. The Conservative party is pro-business because that's what creates opportunity for people to get jobs, and that's what this speech set out."

"I thought it was very much focused on the future but recognising the job isn't done – and hoping the British public will see it as positive, but still a long journey. The government is not just going to have initiative-itus, announcing policies every second of the day. There's a lot of stuff where we need to dig the hard yards."

"I thought it was an excellent speech. It had far more content in it than is usual in one of these rally speeches. We had an awful lot of policy. If you look at the field of what this government's doing it's got a massive amount of policy which really follows the fact we inherited such a dreadful crisis. A whole lot more policies would have been slightly superfluous, it was at the other party conference where they needed a policy that wasn't just written on the back of an envelope. What he added to the policy was a delivery of a purpose: we are looking ahead, to the future. It's our children who will benefit. I've heard an awful lot of party conferences in my time and they don't usually have that much seriousness of purpose."

12.30 – You can now read David Cameron's conference speech in full over here.

12.02 – Snap verdict: a workmanlike speech from Cameron. No new ideas but a development on his conference speech about "aspiration nation" a year ago. Not sure there will be many exciting headlines from that. If his party were expecting a compelling offer from Cameron to match Miliband's policies on energy policy and childcare last week, then they will have been disappointed.

12.00 – Cameron's speech comes to an abrupt end. As we expected, no great new policies, but a broad argument. The whole thing lasted well under an hour.

11.54 – We don't patronise people on benefits claims Cameron. "We look them in the eyes as equals."

11.54 – On people being stuck on the dole he says "we've got to offer them something better than that," says Cameron mimicking Miliband's conference slogan from last week.

11.51 – Cameron moving onto his greatest hits on welfare and immigration. Foreign prisoners, health tourists and benefits claimants all getting a good kicking. The audience seem to like it.

11.50 –  "Let us hear it for social workers" says Cameron. These aren't always the most popular people at Tory conference.

11.47 – Labour MPs are officially against free schools but backing them in their own constituencies claims Cameron. "Isn't it always the way with the left. They don't like privilege unless it is for their own children."

11.45 – Michael Gove is "a cross between Mr Chips and the Duracell bunny" says Cameron, conjuring up a rather disturbing image.

11.43 – "I have a gesture for Ed Balls" says Cameron in regard to the shadow chancellors' "flatlining" gesture he often uses during PMQs. Cameron then jabs his finger upwards as he lists lots of things that are going up, including economic growth.

11.41 – Another gag. This time he accuses Labour of "stictching together" policies and says they should be called "Red Ed and his Blue Peter policies." It doesn't really work.

11.40 – Every section of the speech has contained Cameron's phrase about Britain being a "land of opportunity". He'll be mightily annoyed if it doesn't make tonight's news bulletins.

11.37 – "Generation Y is starting to become Generation why do we bother?" says Cameron about rising housing costs.

11.35 – Bashing big business "may play well with a Labour conference" but it is a crazy policy adds Cameron.

11.33 – Cameron says Labour's policy of raising taxes on big business is the "most damaging, twisted economic policy you could come up with and we will fight it all the way."

11.31 – Cameron onto his section defending big business. Business and enterprise is the key to better living standards says Cameron, adding that he wants "a big society not a big state." It's been a long time since we've heard that phrase from the prime minister.

11.28 – "It doesn't matter if you're black or white" says Cameron, lapsing into a Michael Jackson number, before adding that Britain's "land of opportunity" is open to all.

11.26 – We are still in a debt crisis says Cameron, brushing over fact that he had promised it would be over by now.

11.25 – Cameron says Labour were "intensely relaxed" about leaving people on welfare and turning Britain into a "casino economy".

11.23 – More crowd-pleasing stuff, this time on Margaret Thatcher. Cameron says she was "the greatest peace time prime minister our country ever had." The least controversial thing it is possible to say at Tory conference.

11.22 – Cameron orders audience to give long standing ovation to our soldiers in Afghanistan. They oblige and seem unsure when to stop.

11.21 – Cameron doing a brief obligatory section on Scottish independence. We heard very similar comments from Miliband and Clegg in their speeches.

11.17 – "Let me get this off my chest one more time" says Cameron in response to Russia's comments about Britain being a "small island" before listing many things Britain is supposedly brilliant at. "We may be a small island but I tell you what we are a great country," he adds before joking about "arm wrestling with Vladimir". This seems like an attempt to mimic Boris's comments about this yesterday.

11.15 – Cameron makes a joke about pictures of him looking a bit flabby on the beach. Offers a deal with Miliband: "I'll keep my shirt on if you keep the lights on" he adds.

11.14 – "This isn't job done. It's job begun" says Cameron adding that the "great conservative mission" is to "build a land of opportunity in our country today."

11.13 – "In 2010 the needle on the dial was at crisis point" but now we've "turned the corner" says Cameron mixing his driving/nuclear metaphors up.

11.12 – And he's up. Cameron begins with pitch for the "hardworking people" vote. He believes they've got them all tied up.

11.10 – It's not long to go now until David Cameron gets on stage. The conference has just been addressed by a young girl attending one of the government's free schools. There's been lots of these kinds of speeches at this years' conference.

Yesterday we had a mother of another child on stage, getting very emotional about her own childs' attendance at one of these schools. The delegates love this kind of thing.

11.00 – As Cameron gets ready to address his party, a new poll suggests that he has failed to convince them of his leadership skills.

Comres interviewed 88 local conservative association chairmen. They found that just half (53%) believe Cameron is leading them to an overall majority at the next election, with 46% believing that he will fall short.

They also fail to credit Cameron with the party's recently improved electoral prospects. Just 20% credited Cameron, while 43% said the credit lay with George Osborne instead.

London Mayor Boris Johnson also remains the favourite to replace Cameron with 25% picking him as the next leader, slightly ahead of Thereesa May on 24%.

However most do not favour ditching their current leader with 78% saying Cameron gives them their best chance of winning the next election.

10.45 – My colleague Alex Stevenson has just cornered communities secretary Eric Pickles (no simple task). Here's his brief interview with him:

I asked Eric Pickles, who was wandering around before the speech, what he made of David Cameron's 'opportunity for all' pitch.

"One thing I think as someone coming from my working class background always got my gut about the Labour party is they're prepared to abandon people on large estates, happy to see them on a life of dole, happy to see them getting a substandard education. I think whether it's through our troubled families intitiative or through our help to young people, through the education system, whether it's about to get the universal benefit, it's about trying to bring the best out of people – making sure they understand there's another way, making sure they get the opportunity to do better, to experience wider things."

The 'opportunity for all' pitch is rather general though. It's a bit like fairness – every politician's in favour of it. So what does Pickles make of Nick Clegg's claim that without the Liberal Democrats in government, there wouldn't be any fairness in Whitehall at all?

"Nick is a lovely man and I enjoy working with him enormously but that's a cartoon version of the Conservative party. He' knows perfectly well what burns in Cameron's heart and what motivates me is to make the difference, to ensure wealth goes further down the economic ladder and that they have an opportunity."

Just before speaking to the communities secretary I'd been talking to someone from South Yorkshire who admitted the area wasn't very "fertile ground" for the Conservatives. The Tories face a real northern problem: does Pickles accept there's a huge challenge here?

It's going to be difficult for the Conservatives party everywhere, we've got a big mountain to climb. But I think it's in the interests of the people in the north of England, as it is in the south, for us to have a Conservative majority.

10.30 – The prime minister will today mark the end of the party conference season as he addresses his party in Manchester.

Here's what we're expecting from the speech:

1. Cameron to stand up for big business.

David Cameron is going to use his speech to accuse Labour of deserting the centre ground by treating business like a "dirty word". The speech will be "unashamedly" pro-business we're told. It's not entirely clear what an "ashamedly" pro-business speech would entail, but we definitely won't be hearing one of those.

2. There will be no direct response to Ed Miliband's cost of living crisis.

The Conservatives have been thrown this week by Ed Miliband's populist proposals to tackle the "cost of living crisis". The reason for this is that they are unwilling to concede that there is a cost of living crisis to begin with. They believe that as soon as they start making direct responses to Labour's proposals on energy prices and childcare, they will be placing themselves on losing ground. They think the PM should stick to arguments about the deficit and the economic recovery, where they believe they are on stronger ground.

3. There will be an indirect response to living costs.

Cameron will argue that the only way to improve living costs is to get the economic recovery secure. He will then argue that Labour would risk that recovery. He will also emphasise policies such as the fuel duty freeze and the raising of the tax allowance as areas where the government have helped people's living standards.

Unlike Miliband and Clegg's speech, very little of Cameron's speech has been briefed to journalists in advance. This suggests that the PM could still have a big policy announcement up his sleeve, quite possibly on living standards. If so, everything I've said above about him not wanting to respond directly to Miliband is wrong. In which case, I'm sorry.