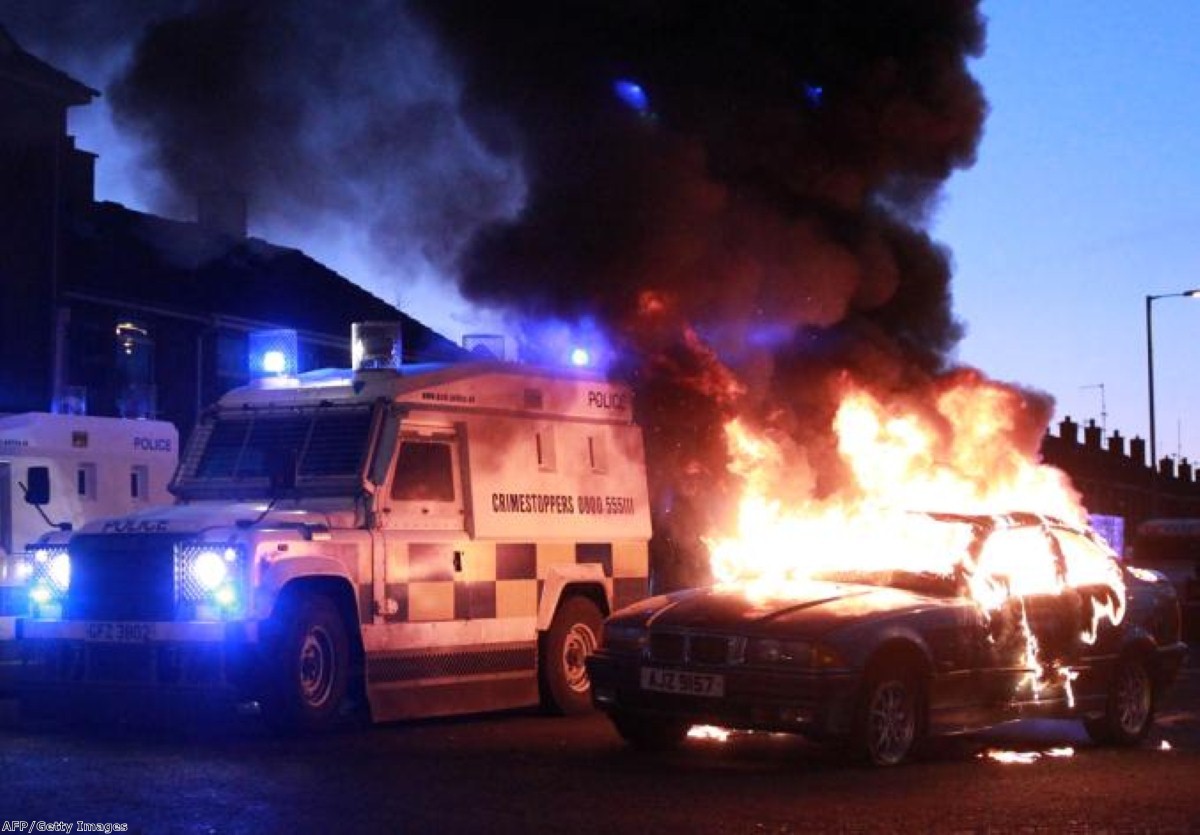 Comment: Belfast’s union flag rioting is a violent reminder of divisions of the past

A young couple push a pram along on street in east Belfast. Twenty yards to their right a car is engulfed in flames. A group of young men in hoodies and balaclavas jog past the vehicle, seeking out a new opportunity for destruction.

The scene is reminiscent of the days when the sectarian Troubles dominated the lives of Belfast's citizens. Yet since December 3rd a series of protests, many violent, have been taking place against a ruling by the city council to limit the number of days that the United Kingdom flag can fly above city hall. The council voted to reduce the flag's once permanent display to roughly 20 days comprised of royal birthdays and national holidays. The heated nature of the protests has escalated in recent weeks, with marches characterised by sectarian songs turning into riots which have resulted in more than one hundred police casualties. The violence has spread into areas inhabited by Irish nationalists, with homes and a Catholic church attacked by bricks and petrol bombs. The protestors are made up of young and old, families and hardened loyalists, while the rioters are predominantly teenagers, most of whom were not yet born during the darkest days of the Northern Ireland conflict.

The already weak economy is enduring further hardship, with traders suffering and hotels reporting cancelations. The image of Northern Ireland, which had undergone such a buoyant transformation, is being dragged back decades. Recent years have seen leading political figures strive for unity. In 2010 British prime minister David Cameron made a formal apology on behalf of the UK for Bloody Sunday, an event in 1972 when 26 unarmed nationalist protestors were shot by soldiers of the British Army. Last year, Ireland's prime minister Enda Kenny laid a wreath at Enniskillen, the scene of a 1987 IRA terrorist bombing that killed 11 people. Also in 2012, Northern Ireland's deputy first minister and former IRA leader Martin McGuinness shook the hand of Queen Elizabeth.

The Union flag protestors have no obvious leader. People who have spoken on the group's behalf lack political credibility. One such man given a platform by the media, Willie Frazer, recently labelled a County Tyrone Catholic school "the junior headquarters of IRA youth" after mistaking an Italian flag on the school's premises as the Irish tricolour. Yet the two main unionist political parties, the Democratic Unionist party (DUP) and the Ulster Unionist party (UUP), while condemning the violence, have played key roles in prompting dissent against the city council's flag vote.

In the weeks leading up to the November decision, representatives from both unionist parties distributed up to 40,000 leaflets alleging that the neutral Alliance party had sided with the nationalist Sinn Féin and SDLP to have the flag removed. The leaflet urged unionists to voice their discontent directly to the Alliance party, with the deputy leader subsequently receiving death threats. While Sinn Féin and the SDLP were opposed to the flag's presence, it was the Alliance party that put forward the compromise of designated days which ultimately won the vote.

Unionist politics doesn't lend itself to concession. The flag was initially raised more than a century ago, in a time when Belfast was a unionist city. Today, nationalists hold a majority on the city council and the concept of the flag's removal is viewed by unionists as another sign of nationalism's increasing political influence. They fear that an ever-growing nationalist population will result in an irrevocable power shift. The DUP, currently the most powerful unionist party, was the only major political group to oppose the 1998 Good Friday Agreement; a pivotal component of the peace process that resulted in nationalist and unionist power-sharing, paramilitary decommissioning and the release of republican and loyalist prisoners.

Paramilitary threats still exist. Police say loyalist paramilitaries have organised some of the riots, while in November a dissident republican faction carried out the first murder of a prison officer in Northern Ireland in almost 20 years. Yet the activity of such groups is relatively infrequent. The most common flashpoints of violence are clashes that occur in the same few working class housing estates where young men, economically deprived and demoralized, are eager for escapism. With unemployment rising and London no longer having the financial means to boost funding for regeneration projects, there are few easy avenues for a resolution to Belfast's unrest.

The city council cannot reverse its democratic decision. The last two months illustrate the speed with which seemingly innocuous political wrangling can lead to social turmoil. Unionist parties can no longer use their own working class population as pawns to express political disgruntlement. Changing mindsets is not a natural process, but a broader flexibility is required if any form of unity is to be achieved. It will be a long time before the majority of citizens recognize themselves as Northern Irish rather than exclusively British or Irish.

Ronan Keenan is a freelance writer and research analyst based in Dublin, Ireland.