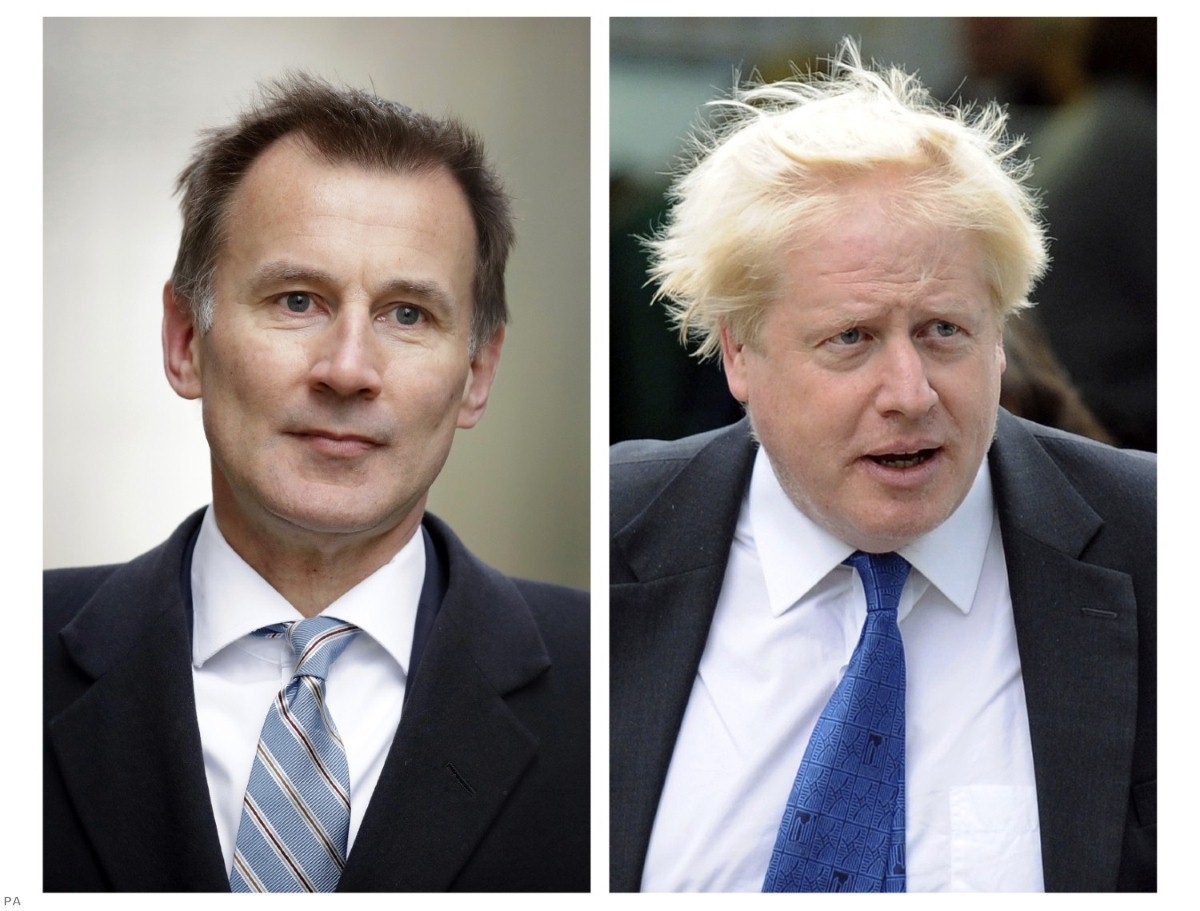 Johnson vs Hunt: The most pointless contest imaginable

We didn't ask for much. The race to be the next prime minister was already going to be stitched up within the Conservative party, first by MPs whittling down options and then by members selecting from the final two. None of the candidates, not even Rory Stewart, had anything really different to say about Brexit. But even from those microscopic expectations, this was the most disappointing result imaginable

It'll be Boris Johnson versus Jeremy Hunt for the top job. Sajid Javid, a generally unremarkable politician who fought an above-average campaign, was knocked out in the afternoon after securing just 34 votes. That left three, with Hunt fighting Michael Gove for a place in the last two.

Gove is an odd one. He has a deeply insincere manner. He is theatrically polite, but surrounds himself with bullying figures, giving a feeling of artifice to his entire persona.

But whatever else you think of him, he has a working brain. When he takes over a new department, as he has at Education, Justice and the Environment, he takes time to speak to experts, comes to a view on what he wants to do and follows through on it. The results are mixed, but the approach is commendable.

No matter how much he pretends otherwise, he does have a decent understanding of what no-deal would entail, not least because of his time talking to the farming industry, which would be hardest hit by the imposition of tariffs to the EU. He has an inquiring and forensic mind. That could have made for some potential fireworks in the leadership race.

The fact that it would have been the two most prominent figures in the official Leave campaign also had a sort of poetic symmetry to it, and would have neutralised the obvious attack line against Hunt that he, as a Remain voter, is not a true Brexiter. Or it would half-neutralised it anyway. The Brexit mindset is now so thoroughly radicalised that having actively worked to secure Leave is no protection from being accused of betraying it.

He couldn't have gone too far, of course. He'd still have been fighting to win the votes of Tory party members. But it provided an outside chance, a tiny flicker of possibility, that someone might actually have been able to effectively interrogate Johnson's position. There could have been a debate in which Johnson wilted under sustained questioning to such an extent that members turned against him. It was at least within the realms of possibility. Just a hope, a tiny hope. But no.

The chances of an upset are now practically zero. Johnson will almost certainly be the next prime minister.

Hunt simply has no qualities to recommend him. Presentationally he is extremely drab, a politician in the form of a brown carpet. He always looks slightly frightened. No-one has ever been inspired, or amused, or even outraged by him.

His politics, if indeed he has any, are all over the place. He seems like a fairly pleasant nice-but-dim figure, and tries to overcompensate for this by aiming too fiercely for what he presumes is a Tory comfort zone. This manifested in his recent statement that the abortion time limit should be halved from 24 to 12 weeks and his insistence that he "150%" agreed with president Donald Trump when he attacked the mayor of London in a way that validated far-right commentator Katie Hopkins.

On Brexit, he doesn't seem to have any genuine views one way or another. He voted Remain, which instantly removes any legitimacy his criticisms of Johnson's policies might have in the eyes of many Tory members. He once called for a second referendum, which will be brought up against him too.

Last year he told ITV News that no-deal Brexit "would be a mistake we would regret for generations", then later tweeted that his words "should not be misrepresented", even though he had said them in public and it was quite clear what he meant. Then he insisted Britain would "would survive and prosper" under no-deal, but that "it would be a big mistake for Europe". A perfect little smattering of post-truth gibberish, cowardice and nonsense.

Not even the most sympathetic observer could discern how he actually intends to leave the EU. All we know is that he wants to renegotiate Theresa May's deal to secure changes to the backstop. He calls this "a new structure" but there is nothing new about it. It is exactly what May tried to do and failed.

When his backer Mark Garnier was asked to explain Hunt's plan, he said that he would go to Brussels "with a proposition the EU was confident would get through parliament". He was then asked what that proposition was. His reply is one for the ages.

"The proposition is to go in and find a way where those sides are confident you can get a deal through parliament."

So in other words, the proposition was to find a proposition both sides could get behind, but which he was currently unable to describe. This is not a plan. It is an aim. He has no idea how to get there. For all intents and purposes, Hunt has no Brexit policy. He just wants to be prime minister.

???“You don't know what Jeremy Hunt's #Brexit proposition is?"

None of this is any different to Johnson, of course. But then, that was why Johnson had to be stopped, or at least forced into articulating something vaguely workable. Now he is faced with someone who is just as inadequate as him, and arguably with just as few principles, but less charismatic.

Hunt's success securing the number two slot robs the contest of any drama, or intellectual content, or any chance whatsoever that Johnson could be prevented from securing a position he has done absolutely nothing to earn. It is the worst possible outcome. So it should come as no surprise that it is exactly what happened.