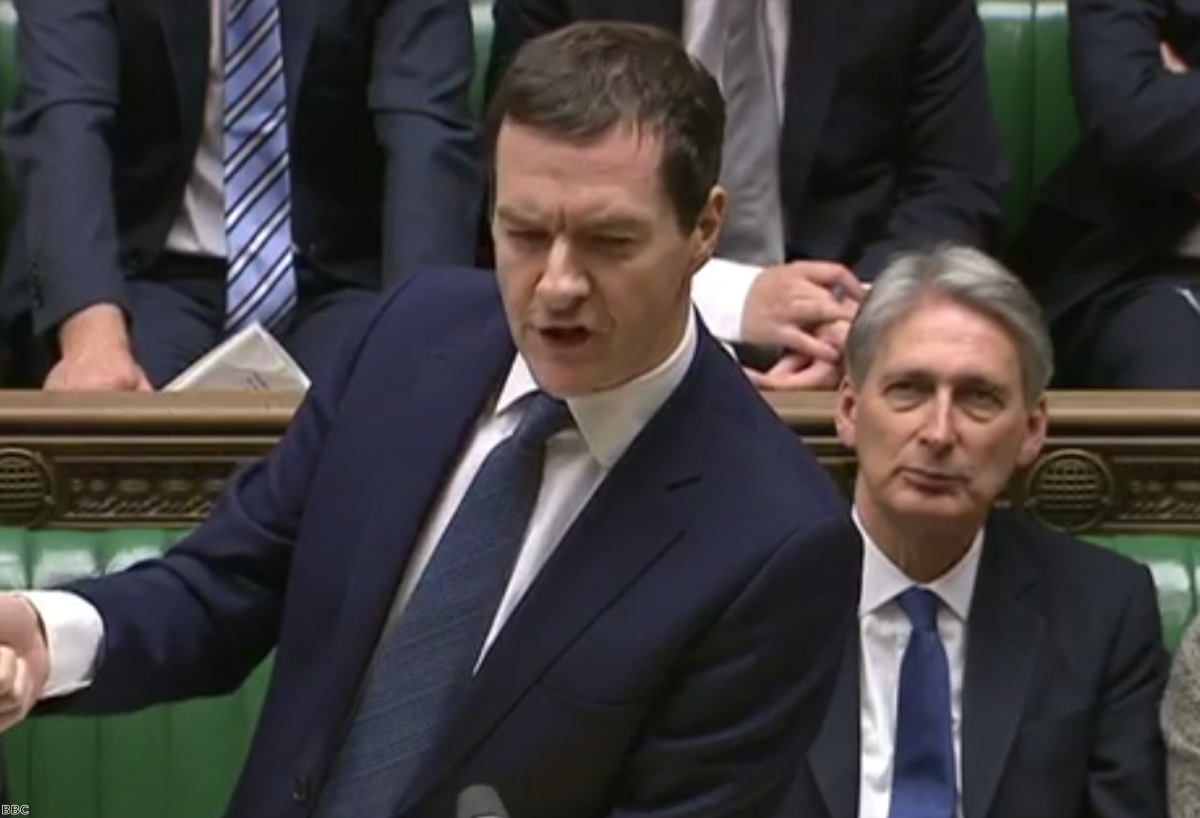 PMQs verdict: Osborne would be a disastrous Tory leader

Tories must feel quite apprehensive when they see George Osborne stand in for David Cameron during PMQs. He really does look like their Ed Miliband – but less likeable.

There's something very uncomfortable about the way he holds himself, a sort of shuffly nervous resentment which typifies all his movements. He can't seem to hide his internal thoughts from showing on his face, so it's often melted into a scowl when addressing a political opponent. Actually his face is even weirder than that. It seems to scowl at the mouth but have this childlike stargazing innocence in the eyes. It's disquieting.

His hands are constantly moving, wrangling about as if they're independent of his body – bouncing, pointing, hovering, slopping over the despatch box. It's easy to write this stuff off as superficial, but it matters. It just does. Cameron's body language, and especially his hand movements, indicate confidence and decisiveness. Tony Blair used to have this constant motion where he indicated the issues in front of him and then divided them up along the desk, giving the impression that he was on top of it all. Osborne just looks like he's being electrocuted.

Labour's Angela Eagle made short work of him. She has this charming dismissive humour to her which is very effective against the chancellor – and could actually work well against Cameron too. Whenever he did passably well, she'd undercut him. "The chancellor has done a bit more research this time," she said, recalling their last clash. "I regard that as a compliment."

She appeared to be overreaching herself when highlighting Tory splits over Europe. Of all the parties in the western world, Labour is not in a position to start pointing the finger at others for being divided. But she amusingly tried to push Osborne into explicitly saying that he agreed with the arguments of trade union leaders like Len McClusky and Frances O'Grady. She didn't quite succeed, but it was fun to watch and it was clever. It's been a while since we've said that of PMQs.

She wasn't perfect. One question was ridiculously long and didn't really have a point at the end of it. She spent much of the session reading off a sheet. All any Labour MP has to do now is walk without falling over to be proclaimed the only hope of the party, but realistically she isn't an obvious choice for the top job. Nevertheless, she offers a timely reminder that someone with a bit of smarts, someone who can think on their feet, can easily take on the modern Conservative party.

Osborne countered as forcefully as he could but Eagle didn't blink. "Seeing as the former London mayor [Boris Johnson] has called him demented, I wouldn't worry about Labour splits," she replied.

When she was done, SNP Westminster leader Angus Robertson stood up to ask about a seven-year-old boy in Scotland being threatened with deportation to Australia alongside his family as part of the Home Office's typically brutal immigration enforcement programme.

.@AngusRobertson says @George_Osborne's response on questions of deportation is "frankly not good enough" at #PMQs https://t.co/QhA5RmuGFy

If it had been Cameron he'd have said he'd heard of the case and would look into it, perhaps he'd be prepared to meet with someone to talk it over. It wouldn't make any difference at all. He'd change nothing, unless of course the media coverage became so widespread and damaging that it forced his hand. But he would give the impression of being concerned and imply that his next step – which in reality is to brush it under the carpet – was a potentially positive development for the family.

Osborne, by contrast, was a disaster. He dismissed the story with a sneer, said immigration rules had been broken and then demanded the SNP "create more enterprise" in the Highlands so they had more people. To call it complacent was an understatement. And there was a sense that that sneer wasn't just to the seven-year-old boy, but also to the public at large.

You can iron many of these types of political mistakes out. Osborne has gone through tonnes of media training and is, it must be said, much improved from how he used to present himself at the start of his political career. But you can't stamp out that type of instinctive misjudgement all the time. And you can't make a man whose body language and expressions are innately jarring look like a compelling proposition to the public.

If he leads the Tory party into the general election against Jeremy Corbyn he would probably still win. But if it's against anyone else, one struggles to imagine him being successful.