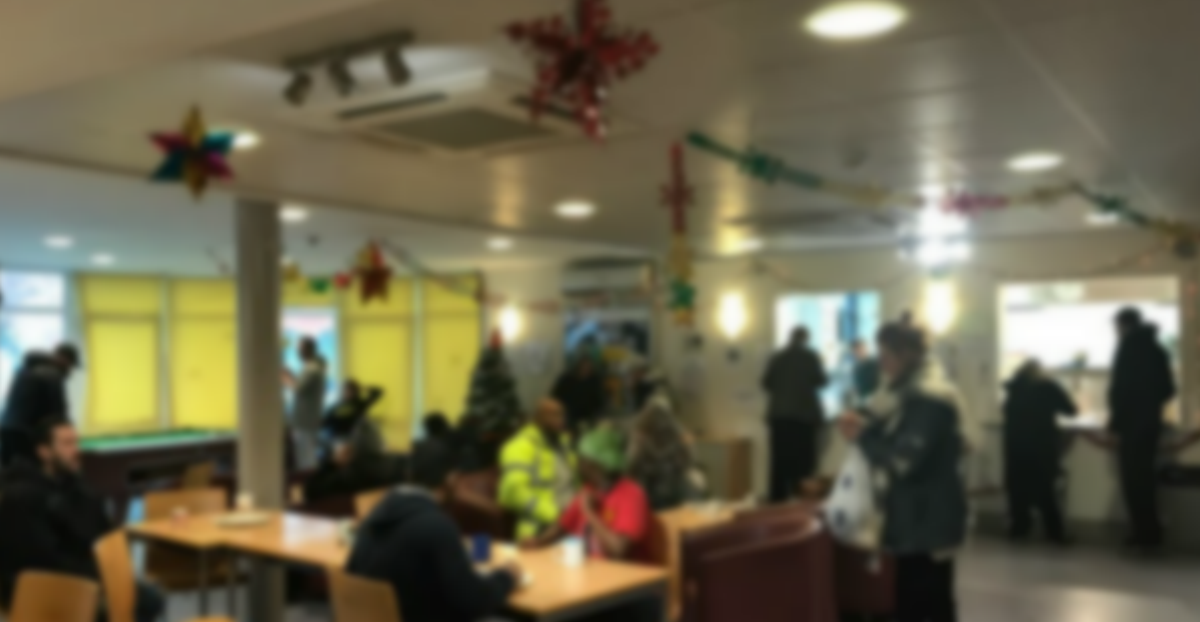 Snow on the ground and a pregnant woman at the door: Inside a homeless shelter at Christmas

Michelle, 46, has chronic fibromyalgia and relies on a mobility scooter to get around. Eight months ago, her claim for Personal Independent Payments (PIP), which replaced the Disability Living Allowance, was rejected by the DWP. Since then, she has struggled to make ends meet.

"I've felt so ashamed. My underwear and clothes were so old, there were so many things that I needed that I just couldn't get," she says. "This place has given me back my dignity. I wouldn't be sitting here in these clothes, in this coat, without it."

Michelle has been using the centre for several months

She's talking about the Hope Centre in Northampton, an organisation which aims to relieve poverty and tackle the causes of homelessness. It's the week before Christmas and the centre is busy. Staff and volunteers are sorting through sackloads of donations, while kitchen staff are dishing up hot lunches.

The centre has seen about 100 people come through their doors today alone. The CEO Robin Burgess says they tend to see between 100 – 120 people most days. Some people come in for lunch, some just pop in for a hot drink and shelter from the cold.

Robin says that not only have the numbers using the centre increased in recent years but so too have the issues which can lead to homelessness and destitution.

"There was a time when work was a route out of poverty," Robin says. "Now, insecure work, high rents and benefit reforms are all making it much harder to improve people's lives."

This winter, Northampton Borough Council decided not to run the severe weather provision which kicks in when temperatures drop below zero for three consecutive days. The Hope Centre stepped in and so on those desperately cold nights, their doors stay open and mats are placed on the ground for people to sleep on.

In echoes of the Christmas story, a couple turned up in the snow earlier this month after being unable to find any other accommodation in the town, including from the council. The woman was heavily pregnant and due to give birth just days before Christmas. She had slipped in the snow and hurt her ankle. Without the shelter provided by the centre, she would have slept on the streets.

"Once, the only people who were really destitute were the street homeless," Robin says. "Now, so many more people are on the breadline."

I speak to one of the volunteers who is busy sorting through donations of clothes. The room she is working in is usually used for art classes. Colourful canvasses hang all over the walls but today the floors are covered with piles of jumpers, coats and trousers. At christmas donations come in thick and fast. In the hour or so I am at the centre, several boxes crammed with food and and bath products are dropped off.

Susan (not her real name) has been coming to Hope for around a year. She says she had mental health problems and suicidal thoughts in the past. Thanks to the support she has received here, she now helps out at the centre herself.

"I've got a 6 year old son. We wouldn't have got through last Christmas or this one without this place," Susan says.

"Now I'm doing so much better and have been helping out myself, I've seen how much work goes on behind the scenes."

Susan talks about the different types of people who visit the centre. She says there is often an impression that all homeless people are drug addicts or have never lived regular lives.

"I thought that too once," she says. "But there all types that come here. There are so many talented people, people who have worked in different professions."

Robin says that the role of Hope is not just to help people who are street homeless but also those that have since been housed.

"We're their family. The support we provide has to continue, or the cycle will never be broken."

The Hope Centre aims to empower people to take back control of their lives. The meals aren't provided for free but are sold at a very low price. The food that isn't used in the kitchen is sold off to the people that want to take it away. One woman passes me with a carrier bag full of tins – it cost her 70p.

Staff and volunteers from Travis Perkins, a locally based building firm, have recently dug over a large allotment plot using tools which were repaired at the centre. They plan to produce their own vegetables and salad to use in the kitchen.

"We want to explore new ways of providing food. It's not enough to just give it out, you don't change people's lives that way, you don't empower them," Robin says.

As I leave the shelter and head back into the town centre, I pass several homeless people in shop doorways and two tents pitched up on a patch of grass behind a busy road. Right across the country, this has become the new normal. With homelessness soaring, rough sleeping is more visible now than it has been for years. And organisations like the Hope Centre are needed more than ever.