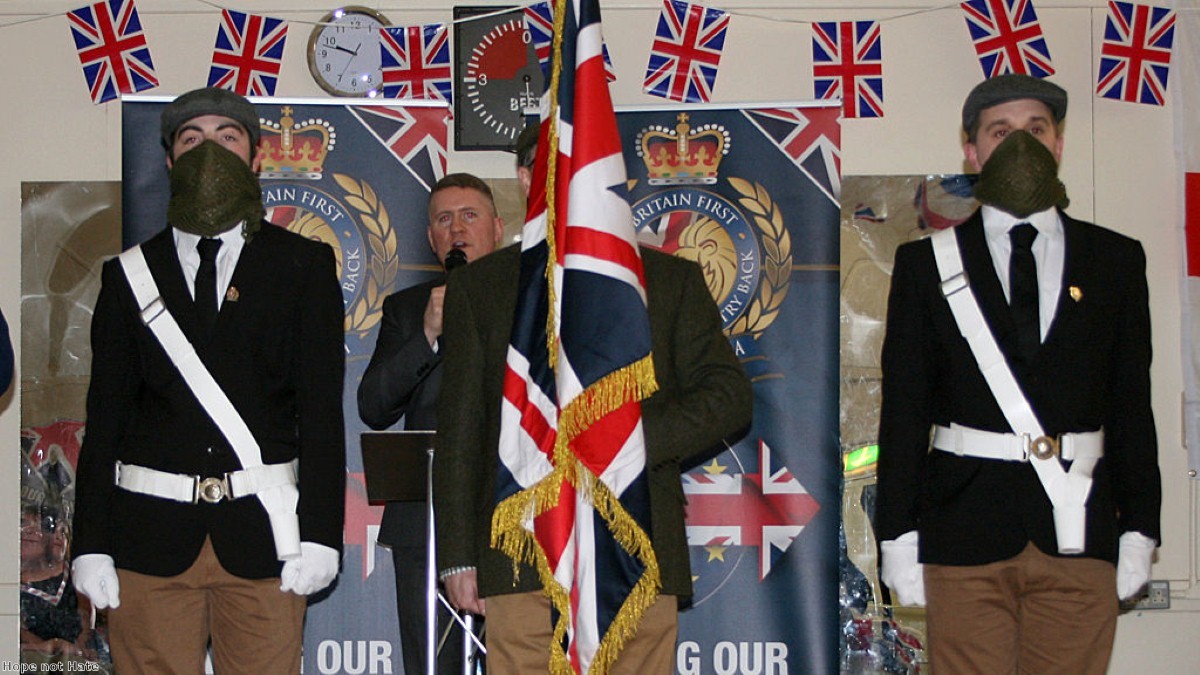 Their Facebook page has almost half a million likes, with up to two million people a day engaging with their 'patriotic' pictures of soldiers, little children and Union Jacks.

However, behind the social media facade lies a small but dangerous group of religious fundamentalists intent on starting a 'holy war' on the streets of Britain.

Many of those who share their Facebook posts have little idea of the extreme agenda behind the group.

However, a new report by anti-fascist group Hope not Hate exposes their links to far-right protestant extremism and Northern Irish terrorism.

The main figure behind the group is Jim Dowson, a hardline evangelical anti-abortion activist with close ties to Loyalist paramilitary groups in Northern Ireland.

The former BNP fundraiser was arrested for organising several illegal parades in Northern Ireland which culminated in a series of violent clashes on the streets of Belfast.

In an interview with Channel Four News, Dowson admitted to pursuing a "holy war" on the streets of Britain:

"One thing I agree with Mr Choudry on, there is such a concept as a just war, a holy war. He calls it Jihad. We call it a crusade," he told Paraic O'Brien.

"Without any shadow of a doubt, this is a holy war."

The group's other main figure is Paul Golding, a former BNP councillor and the man behind Britain First's attempts to build a uniformed "Christian defence force" in the UK.

Driving in military Land Rovers and wearing paramilitary-style uniforms, the group have staged a series of mosque invasions across the country and almost fomented a riot on Brick Lane in London.

In March this year, they held a flag ceremony in which masked activists were handed battle standards before being divided into battalions and companies.

Members have also been filmed training in unarmed combat. Former members of the armed services are actively courted by the group.

Golding has been held a total of four times by anti-terror police.

Channel Four News filmed the group as they travelled the country visiting the homes of Muslim hate preachers in an attempt to create a new holy war on the streets of Britain.

Anti-fascists today warned that the group could cause a "violent backlash" on the streets.

"Britain First is the most dangerous group to have emerged on the British far right scene for several years," director of research for Hope not hate and former member of the National Front, Matthew Collins said.

"Its confrontational style is attracting huge publicity and could potentially lead to a violent backlash. If nothing else, its provocative actions – such as distributing Bibles inside mosques and doorstepping Muslim community leaders in their homes – is generating a climate of fear.

"In effect, Britain First is the far-right version of al-Muhajiroun, the Islamist group led by Anjem Choudary. Despite numerous arrests, Golding and Dowson have not slowed their sick stunts against Muslim institutions. It’s time for the authorities to act properly against Britain First."

In an ominous move, Britain First have threatened a campaign of "direct action" against any journalists reporting on the group.

"These direct action operations will be 'personal' not on-line or via the internet," they said in a statement on Thursday, adding that "Britain First is not interested in facing lying journalists in the dock, but we shall face them."