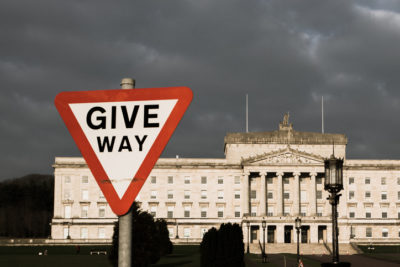 A new report from the Institute of Economic Affairs suggests that, in the absence of agreement from the EU, the UK has grounds to take unilateral action to ensure prosperity and stability in Northern Ireland.

The Protocol is failing to deliver in its key objectives. There has been significant diversion of trade, an outcome it expressly sought to avoid.

The cost of the Protocol to NI has been estimated at £850m per year. This includes £360m establishing and operating the Trade Support Service in its first two years, a further £150m on digital agri-food certification and tens of millions more in related funding to the NI Executive.

There has been significant disruption to trade, with supplies of specialist goods imported and sold by small retailers particularly disrupted.

In January to March 2021, checks on goods from GB at ports in NI represented 20 per cent of all checks carried out at the EU’s borders and more than any single member state, despite NI’s population comprising 0.5 per cent of that of the EU.

The EU should consider the UK’s proposals as set out in the July 2021 Command Paper, which set out ways to substantially renegotiate the institutional framework and the parts of the Protocol relating to trade in goods.

The proposals for a dual regulatory zone are economically liberalising and, in many ways, represent a free market solution to the issue of the Irish border, showing high levels of openness to trade with the EU.

As well as economic benefits from such openness, this would alleviate the concerns of Unionist parties about the constitutional position of NI, which may help to break political deadlock in the devolved institutions in NI.

The EU should be open to renegotiating the Protocol without the UK needing to take unilateral steps. Their proposals would make the situation worse, as they are conditional on full implementation before any flexibility will be granted.

The EU’s stance brings into question whether averting risks to the single market is its priority, or if it is not in fact using the protocol as leverage to procure regulatory alignment from the UK or in pursuit of other tactical priorities.

Commenting on the paper, Lord Frost, senior fellow at Policy Exchange and former Brexit negotiator, said: “The IEA’s report is a very timely contribution to the analysis of the political and economic situation created by the implementation of the Northern Ireland Protocol. It underlines the many costs of the current situation – economic, fiscal, and in trade diversion.

“It also rightly notes that the proposals made by the UK government last year would not only help to stabilise the situation politically, but would also be economically liberalising and therefore constitute a gain for all sides. It would still be best to reach a negotiated settlement on these lines but, if the EU will not negotiate, then the government will be right to intervene unilaterally to restore stability.”