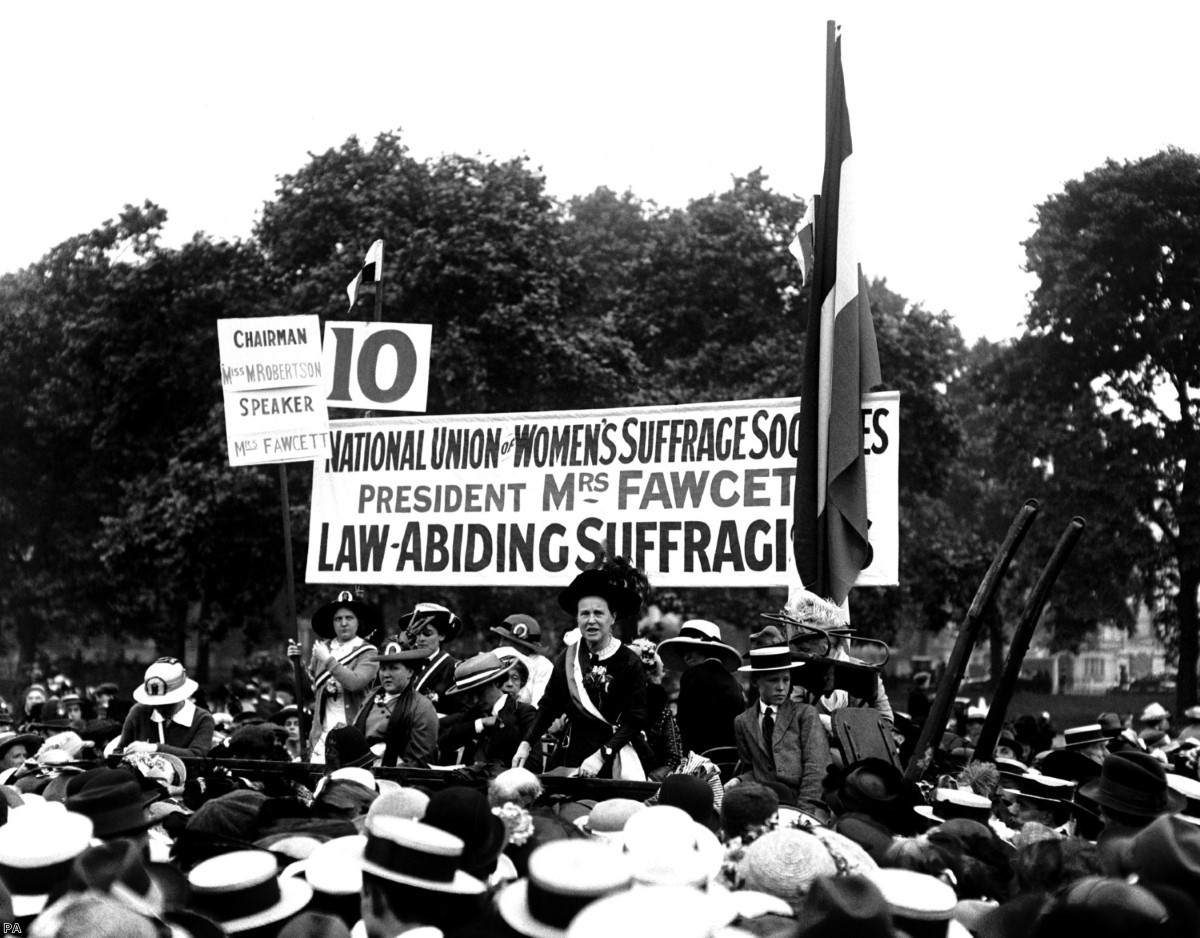 Almost 90 years after her death, Millicent Fawcett is making history again as she becomes the first woman to be commemorated with a statue in Parliament Square. It's also the first statue in the square designed by a woman: Gillian Wearing.

Some have expressed surprise that it is Fawcett, a law-abiding suffragist, who is being honoured instead of one of her better known fellow campaigners. But Millicent Fawcett was indeed a leader of the movement and dedicated 62 years of her life to campaigning for the vote for women.

She began at the age of 19 by collecting signatures on a petition in 1866; one she was too young to sign herself and which was presented to parliament by John Stuart Mill when he was an MP.  She went on to be instrumental in setting up the first suffrage society in London in 1867 and then began the laborious work of letter writing, lobbying and travelling the country to speak at countless public meetings.

She undertook her first speaking tour aged just 22, at a time when women rarely spoke in public. By 1897 suffrage societies all over the UK came together to become the National Union of Women's Suffrage Societies and by 1907 – 40 years into the campaign – Millicent Fawcett became the movement's president.  By that stage it had tens of thousands of members. She went on to establish the International Women's Suffrage Alliance, forming links with women all over the world who were campaigning for equal voting rights.

Millicent Fawcett believed in mobilising women from all backgrounds. She actively engaged working class women, appointed them as organisers and worked with trade unions. She said that she believed in a "grand freemasonry between different classes of women".

Contrary to what some may believe, Millicent Fawcett supported the suffragettes when they emerged onto the scene in the early 20th century, welcoming their militancy and their headline-grabbing ability. She also raised money for suffragettes who had been in prison.  But when she felt their tactics were becoming too violent and counter-productive, she distanced herself from them.

As the First World War began, the suffragettes disbanded and never resumed their activity. But Millicent stuck with it. In 1917 she led a delegation to see prime minister Lloyd George and negotiated the amendment to the Representation of the People Act, which won some women the right to vote (8.5 million women aged over 30 with property). But she didn't stop there and continued the campaign until full equal voting rights were finally won in 1928.

Millicent Fawcett was more than a suffrage campaigner. When she began her lifetime of campaigning, women had no access to higher education or the professions. Everything they owned belonged to a man, including themselves. So Fawcett also campaigned for women's access to education, co-founding Newnham College, Cambridge and supporting Emily Davies' campaign to open up Cambridge degrees to women.

She was particularly focussed on the rights of working women. She campaigned against child labour and child sexual abuse and was involved in the criminalisation of incest. She campaigned against the practice of excluding women from courtrooms when sexual offences were under consideration and fought to see the legal profession and civil service opened up to women and for equal access for women to divorce.  She was a proud and committed feminist and wrote the introduction to the republished Vindication of the Rights of Woman in 1891, by Mary Wollstonecraft.

She was also, finally, a great human rights and civil rights campaigner.  She once said of herself: "I cannot say I became a suffragist, I always was one."  It is fitting that her statue will capture her in her prime, a woman in her 50s – the age at which women so often say they become invisible to society – gazing proudly and determinedly across at parliament. But the plinth will also include the images of 59 other suffrage campaigners, women and men, suffragists and suffragettes.

As we publish our annual Sex and Power report for 2018, men still dominate positions of power across every sector of our society and economy.  At the Fawcett Society our focus is firmly on the future, just as Millicent Fawcett would want it to be. The statue acts as a rallying call to all of us, to achieve equal representation and equal power for women in all their diversity. 2018 marks a tipping point for gender equality. It truly is #OurTimeNow.