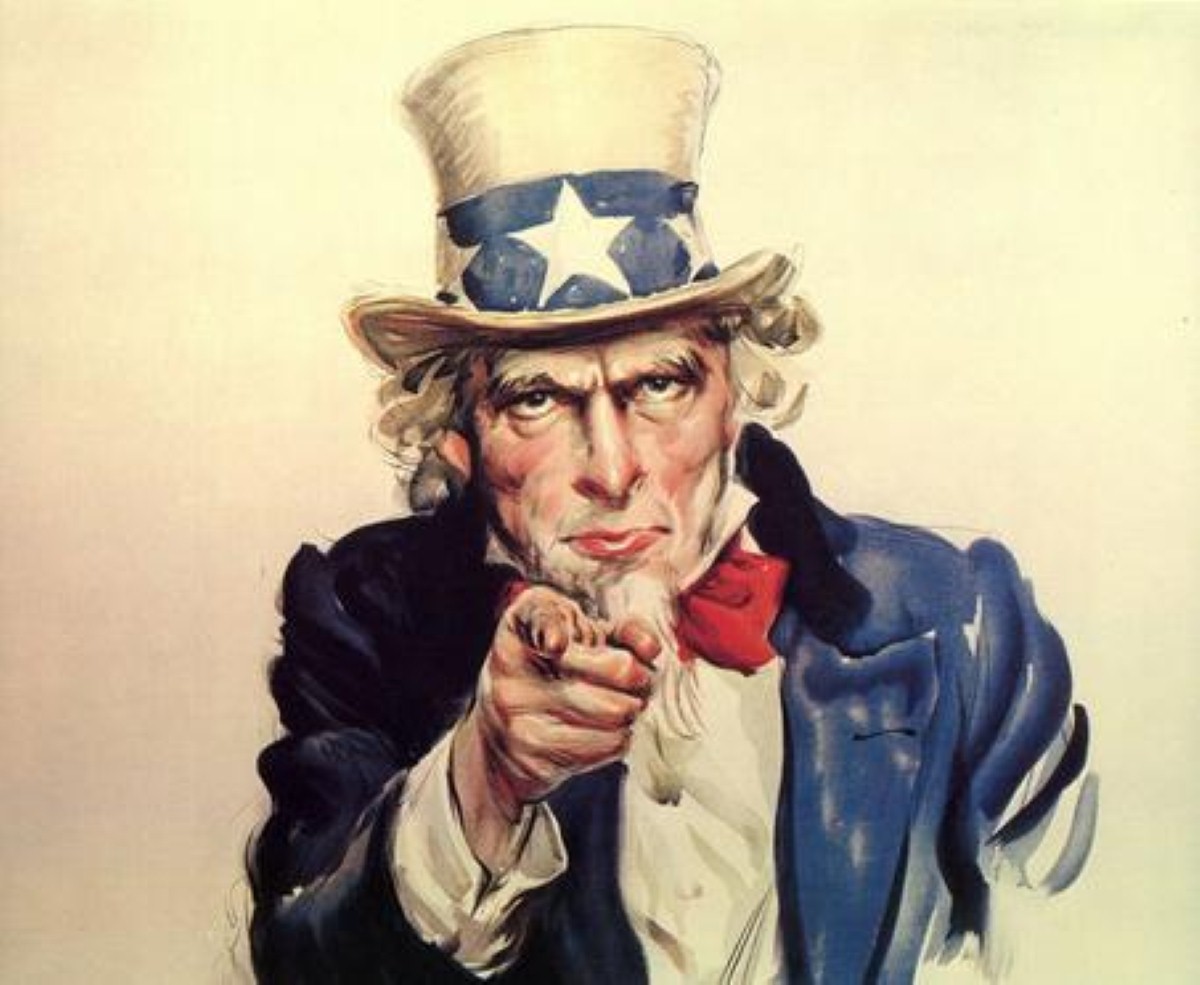 As the British Library's new exhibition shows, when it comes to propaganda the ridiculous – and our own politics – are never far away.

"So you see, Chuck…" a slick-haired black-and-white politico begins. He's explaining 'propaganda techniques' to his budding young sidekick in the short clip from a 1949 film which starts the Propaganda: Power and Persuasion exhibition. The sidekick learns that every different type of propaganda, from 'band wagon' to 'name calling', are all worth looking into. "I think it will be really interesting to conduct a serious study of propaganda," the sidekick concludes breathlessly. It's laughably earnest. And it sets a surprisingly light tone to start of a show which, just as surprisingly, ends on an oddly sinister note.

This chirpy footage is the context in which pre-20th century propaganda examples are presented. Early efforts seem awkward and unsubtle, but the tongue-in-cheek labels for each item offering a 'how to' guide – 'create moral outrage', 'exploit existing culture', etc – make them approachable and understandable. And still, somehow, just a little bit ridiculous. Is this all you've got, humanity? An imposing portrait of Napoleon, who gazes down imperiously at the caricatures surrounding him, has more artistic merit but is, ultimately, just as cheap.

Think of the word 'propaganda' and your mind will probably jump to the great monolithic efforts of the 20th century, to the Cold War posters and films in which this exhibition is replete. It's tempting to laugh at these predictably polemic images, or even dismiss them outright, as the product of an era when the world was a simpler, easier to divide place. And then you notice what's lying next to them. Some examples of 1940s wartime propaganda featuring a cartoon of Adolf Hitler as an evil Nazi bat devouring a beautiful woman sit next to the set of Iraq War playing cards featuring Saddam Hussein as the Ace of Spades. Bert the Turtle's jaunty 'Duck and Cover' song has echoes in the sterile British government terrorist advice of 2005. What was ridiculous in the past continues to be just as ridiculous today.

Winning hearts and minds on political issues is, we learn, usually a matter of bludgeoning the message across. When the state starts to venture into less obviously partisan areas, the game changes slightly. On public health, the 'nudge' philosophy now in fashion in Whitehall is seen to have roots infiltrating deep back into the past. Populism often comes at a price. A Balkan comic encouraging children to steer clear of landmines entitled 'Superman Smltonoso Nasljede' had to be pulled because children kept wandering into landmine areas, hoping to be rescued by their superhero. Britain's broadbrush appeal is also wrapped up in fuzzy packaging. An Empire Marketing Board poster from 1928 presents a peaceful image of a family gazing at the Rock of Gibraltar, with a Royal Navy battleship seen bow-on from the stern.

As the exit doors approach a sense of unease builds. This is the most atmospheric part of the exhibition: a wall of digital noise which sums up the incessant activity of social media and the realities of propaganda in the modern world. It's like the moment in Hitchhiker's Guide To The Galaxy where one of the characters is shown how big the universe is, but with Twitter's reaction to the Olympic Games opening ceremony instead.

After finishing this review I will upload it to a website and place links to it on Facebook and elsewhere. I will tweet about it and become part of the propaganda machine. In the age of social media, the exhibition concludes, "everyone's a potential propagandist". Propaganda can be funny, or sinister, or sometimes even effective. Suddenly realising you're a part of the machine is just a little bit scary.

Propaganda: Power and Persuasion runs at the British Library from May 17th to September 17th 2013