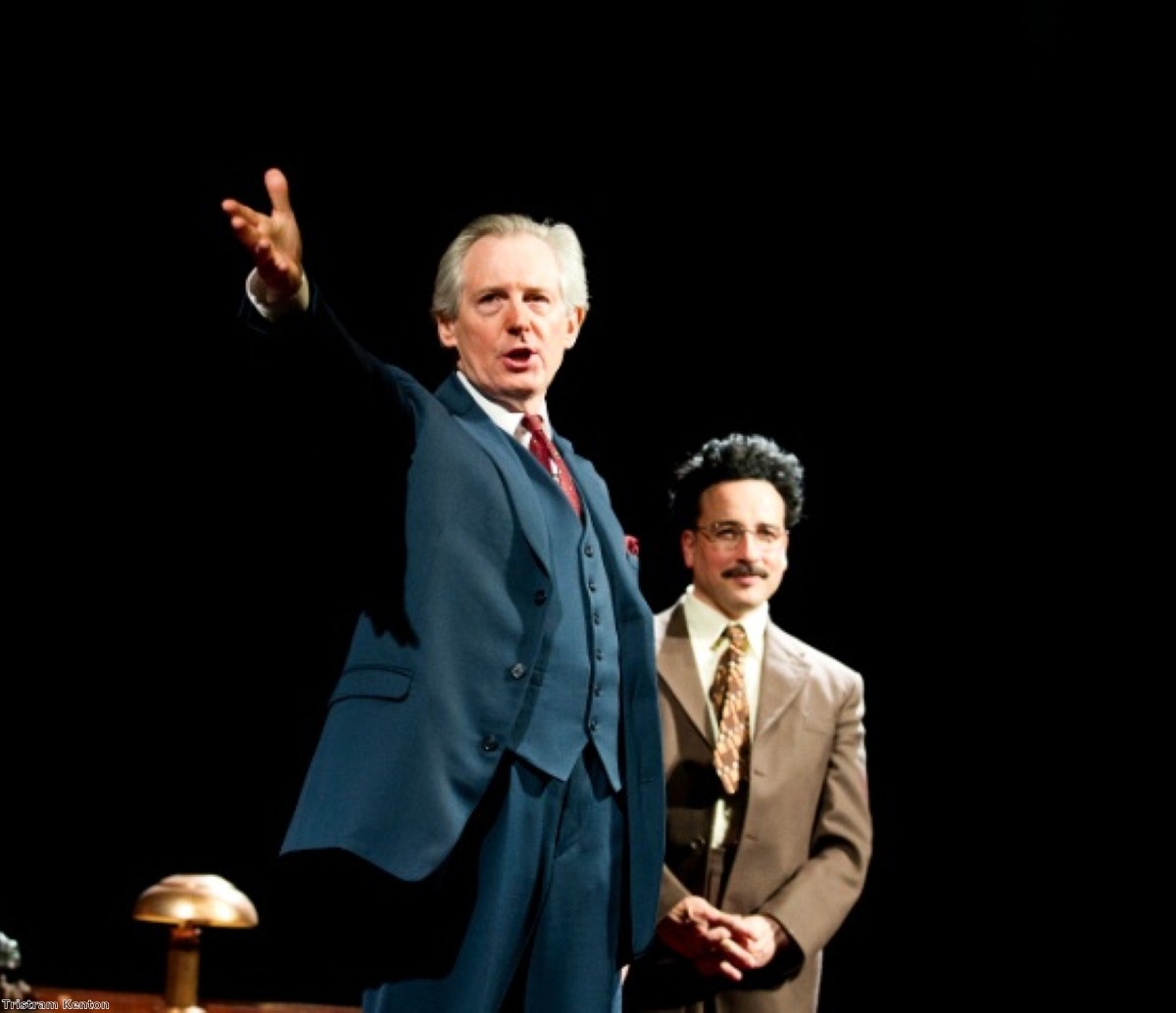 Review: Democracy at the Old Vic

Politics is about much more than just principles, as the latest revival of Michael Frayn's play Democracy reveals.

At first glance everything seems in its right place. Middle-aged men in suits make decisions through a fug of cigarette smoke. The agonies of a tenuous coalition, clinging on to power and having to work with liberals they secretly hate (sound familiar?) occupy the minds of the Social Democrat party.

But life under the chancellorship of Willy Brandt (Patrick Drury) is not quite so simple. Democracy reminds us that politics is about much more than just ideas.

Talk about communism and capitalism would just make this another Cold War play, but ideology barely enters the frame. Frayn is interested in more than that. His business is exploring the real nature of politics – the dark side as well as the light. Questions of loyalty and betrayal simmer away from start to finish.

The audience is watching these scenes of life in power, we realise, because we see what the Stasi sees. A junior party official, Gunter Guillaume (Aidan McArdle), is reporting everything he sees to his East German handler Arno. Arno watches everything attentively at the side of the stage, as much a spectator as the audience are. The minder provides a sounding board for Guillaume's inner thoughts as the agent infiltrates Brandt's inner circle, eventually becoming his personal assistant.

They are both fascinated by Brandt, the master of gesture politics, who casts an enigmatic, distant figure. None of his colleagues can quite grasp what makes him the leader he is, either. They are in awe; so are we, initially, until his human frailties and internal conflicts are slowly revealed. We begin to understand that he is just like the rest of us, hiding his faults to win popularity and success. Politicians are at once hero and villain, to be treated with either worship or cynicism – and nothing inbetween.

For Frayn, democracy is as much about espionage as it is about politics. So his play is as much about Guillaume, an apparently pathetic figure, as it is about Brandt. The tension of his split loyalties to the Stasi and to Brandt, never resolved, makes Guillaume a politician, too: he is always playing more than one role, the public face different from the private individual with his secrets and lies. The spy fears his precarious life could be stripped away in a moment, just as a politician's can – and eventually is. Brandt, the first left-wing German chancellor in decades, is brought down by the scandal of his nobody assistant.

There is not so much difference between the two of them, after all. Both play a game of principled deceit. Both fool themselves as much as anyone else. Brandt strives to ensure his hands are clean of the dirty work of politics. Guillaume trying to justify the strain of his double-life by persuading himself he can keep both his masters happy without betraying either. The party compromises on principles, because it has to get things done. The characters compromise on their integrity, in order to make progress with their own goals.

This production, a revival of the 2003 original, doesn't waste time in getting under the skin of politics. For those wanting gentle entertainment, Yes, Prime Minister awaits. For those in the mood for something a bit more exacting on the grey matter, Democracy is exactly what's needed. Those familiar with the problems of 21st century British politics – the disengagement headache, the ambiguities of personality politics, the constant atmosphere of distrust overhanging the entire political class – are present here. Frayn's achievement is in addressing the universal theme of politics: an unpleasant mixture of principles and pragmatism, with the emphasis uncomfortably weighted towards the latter.