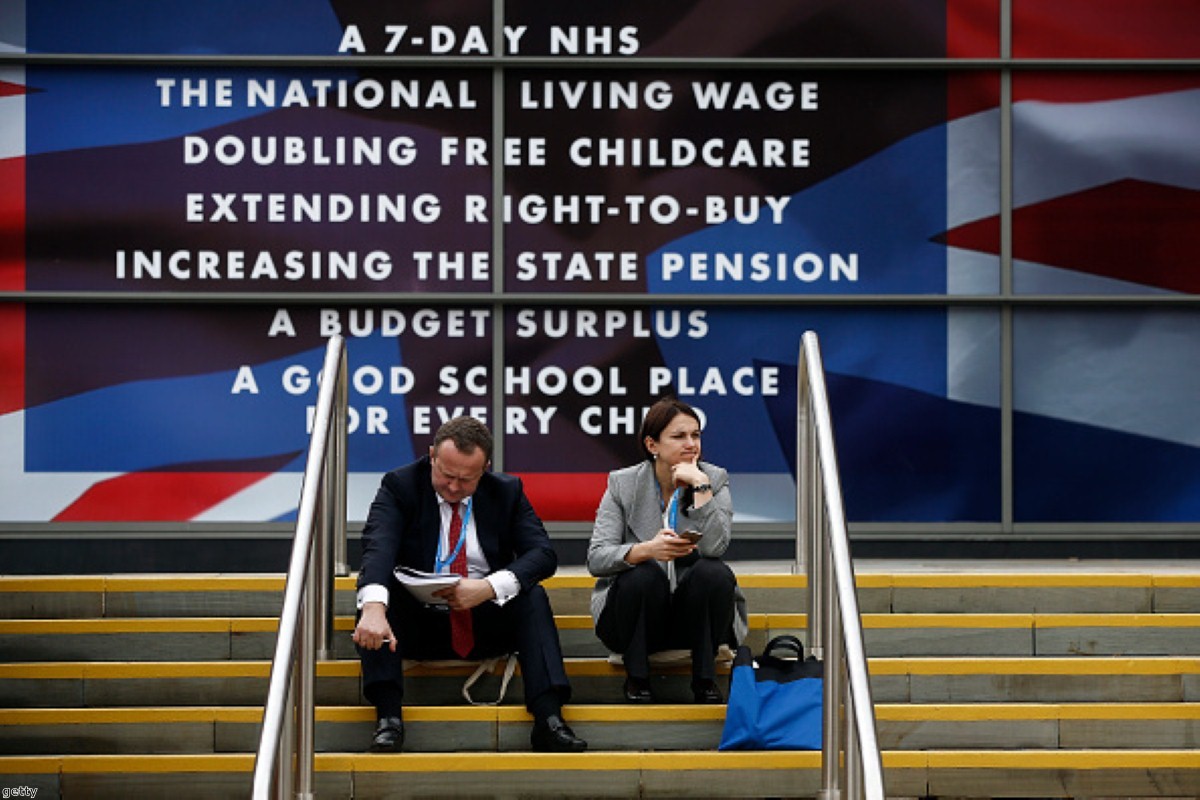 Tories are jubilant but there’s no heart to their conference

The weird thing about this conference season is how happy it is. The Lib Dems were all pleased as punch, as if nothing had happened since the last time they got together. Labour had this frenzied sense of joy electrifying the conference, not because they thought they were going to win – almost none of them really think that – but because things were chaotic and remarkable. And the Tories… Well, the Tories won the election. They actually improved the share of the vote for a governing party and secured their first majority since 1992. They've earned the right to be pleased with themselves.

They're trying to be understated about it, although it must be said they're not doing a very good job of it. Michael Gove told delegates he found commentators' mistaken predictions of a Labour coalition "hilariously" wrong. In the bars of the conference centres, there is a background hum of guffawing and back-slapping. But dig beneath the happiness and there is very little political content here.

The stands, which are usually dominated by pressure groups and charities, are now mostly shops. They sell scarfs, posters, clothing – there's even a Harvey Nicks one. You could quite literally do your Christmas shopping here. The fringes are deathly dull. I haven't heard anyone say a good word about any of them. The speeches from the conference floor are predictable. Theresa May says immigration is bad – surprise! Jeremy Hunt thinks cutting benefits makes people work harder – surprise! It's standard, meat-and-potatoes Tory party conference material. There's not even a story for journos to grab hold of, except for the first rumblings of a leadership fight which will take place in four years' time. It's hard to get excited so far in advance.

You can feel it in the conference hall. Speakers – even the big beasts like Gove or May – struggle to get any applause. And you could see it in the selection of Zac Goldsmith, on just 6,514 votes. He would have come fifth in the Labour London mayoral vote, behind David Lammy on 8,255. The Tories are where Labour was after Tony Blair was done with them: gutted. Hollowed-out. This is what cynical electoral strategy does to a political party.

You see the truth of that inside the secure zone, a nightmarish world in which everyone looks exactly the same – businesslike, in a smart navy-blue suit.

The Lib Dems are often hilariously similar to their stereotype – you really do see lots of brown socks and sandals – but they are also wonderfully diverse. You see teacher-types in scruffy jumpers next to Alan Moore look-a-likes with black hats, trenchcoats and long wirey beards. They're a diverse bunch. Labour has always had its androids, the smart-looking vacuous young men who rise through think tanks to become special advisers and, in their dreams, MPs, seemingly without ever having encountered a political conviction. But this conference was a strange combination of wild-eyed young people (the full army of Corbynistas had not had time to join in time for conference, but a few were there) next to august former ministers. It was eclectic and passionate.

Not so in Manchester. Here it is mostly men and they mostly wear the same suit. You don't even see those elderly couples falling asleep quite so much anymore. The Tory conference is now a corporate event, sanitised to the point of consumerism.

And yet outside it's a very different world. The protestors line the steel passage into the conference centre, shouting "Tory scum" at whoever walks by, like a red carpet walk of shame. They're not representative of anything really, except for a brand of left-wing protest which has been around for decades. They don't represent the north's rejection of Toryism, as they would have you believe, or Jeremy Corbyn's 'new politics', as the Tories would have you believe. They're just kids protesting – no more, no less.

A Tory source with close contacts in the police told me yesterday that they may be allowing the protestors so close to the entrance as a way of showing the middle finger to May, who officers particularly detest (the feeling is mutual). I don't believe that for a second and I'm not sure my source did either. But it was a nice story. Too good to check.

More likely, it is easier to control the interaction between protestors and delegates in the narrow corridor of the entrance, rather than by pushing them out to the side streets, where delegates could be attacked more easily.

But the fact those sorts of calculations have to be made at all tells you something important about the Tory conference. Regardless of how representative they are, those protests on Sunday – and the rally yesterday – were incredibly well attended. This will likely be the face of the Tory party conference for years to come: an increasingly empty corporate event, with protestors outside, spitting at those who walk in.