Theresa May served as Prime Minister of the United Kingdom of Great Britain and Northern Ireland from 2016 to 2019.

May led the UK government through the triggering of Article 50 and the subsequent ‘Brexit’ negotiations.

After a disappointing performance in the 2017 General Election, she was eventually ousted after failing to find a Brexit deal to the liking of the then parliamentary Conservative Party.

May has been the Conservative Member of Parliament for Maidenhead since 1997. The UK’s second woman Prime Minister, she is also the only woman to have held two great offices of state (Home Secretary and Prime Minister). 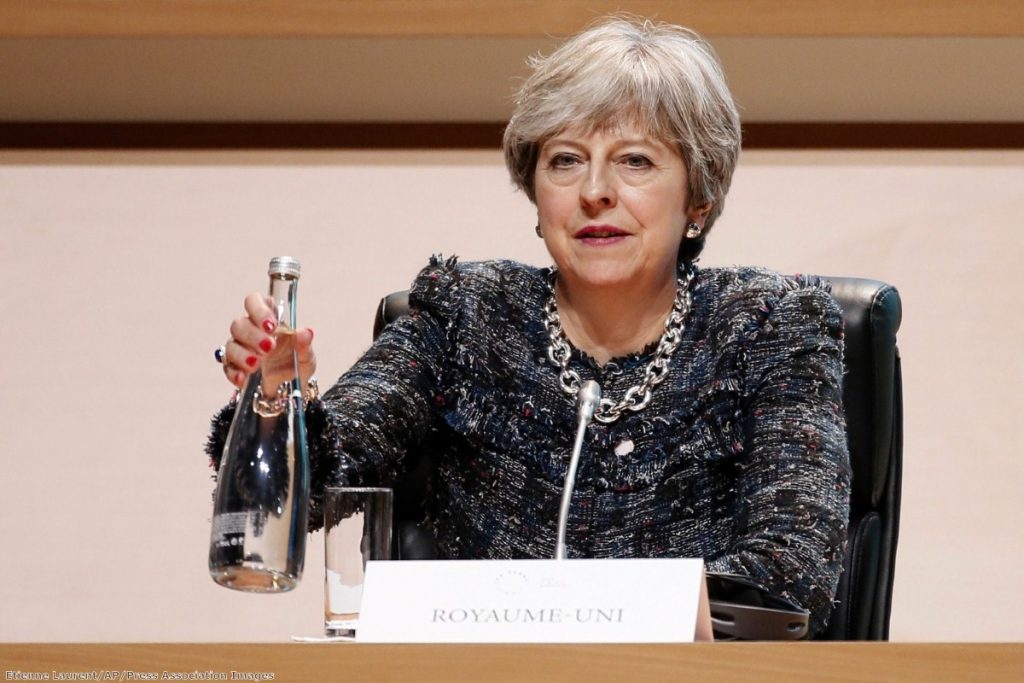 When David Cameron resigned as Prime Minister and Leader of the Conservative party following the ‘Leave’ result at the EU referendum, Theresa May declared her candidacy for the Conservative leadership.

Launching her leadership campaign in June 2016, May said: ‘My pitch is very simple. I’m Theresa May and I think I’m the best person to be Prime Minister of this country’.

She began the process of leaving the EU in March 2017 by triggering Article 50. One month later, she announced a snap General Election with aims of increasing her majority and bettering her hand in the Brexit negotiations to follow.

The Conservative manifesto in the 2017 General Election proposed reforms to social care that would have raised the threshold for free care from £23,250 to £100,000 while including property in the means test and allowing payment after death.

After a public backlash – which included the policy being labeled as the ‘dementia tax’ – there was a U-Turn on the policy just a few days after the manifesto launch. This, alongside a lackluster campaign and May’s reluctance to debate on television with her political rivals, saw the Conservatives lose ground at the polls.

In the hung parliament that followed the 2017 election – in which the number of Conservative seats had fallen from 330 to 317 – May formed a ‘confidence and supply’ agreement with Northern Ireland‘s Democratic Unionist Party.

In 2018, May survived a ‘no confidence’ vote from Conservative MPs and, in January 2019, a parliamentary ‘vote of no confidence’ tabled by Opposition Leader, Jeremy Corbyn.

However, after failing to pass her Brexit deal on three occasions, May tendered her resignation to the Queen on 24th July 2019.

May’s premiership included 51 resignations – 33 relating to Brexit. These included 12 departures from the Cabinet. This unprecedented number of resignations over less than three years was more than was experienced by Margaret Thatcher (11 years) and Tony Blair (12 years).

What is Theresa May doing now?

After leaving 10 Downing Street, Theresa May has become Lady May after her husband was knighted.

She continues to serve as the Conservative MP for Maidenhead having been re-elected at the 2019 General Election with a majority of 18,846.   She sill speaks regularly in the House of Commons, and has appeared critical of her successor on a number of occasions.

According to the Register of Members Interests, since leaving office, Theresa May has clocked up many hundreds of thousands of pounds from commercial speaking engagements.   The entries in the Register would seem to suggest her going rate is around the £40,000 mark per time.

May first won her safe Conservative seat of Maidenhead in Berkshire at the 1997 General Election.

Upon entering parliament, May became Shadow Spokesman for Schools, Disabled People and Women (1998-1999). She then became the first of the Conservative MPs elected in 1997 to enter William Hague’s shadow Cabinet, doing so as shadow Education and Employment Secretary in 1999.

Under Ian Duncan-Smith, May was made shadow Secretary of State for Transport.

In 2002, she became the first female Chairman of the Conservative Party. During her speech at the 2002 Conservative Party Conference, she famously claimed that her party must change, saying: ‘You know what people call us? The Nasty Party‘.

David Cameron made May shadow leader of the House of Commons in 2005 and then shadow Secretary of State for Work and Pensions in 2009.

Following the 2010 General Election, May was made Home Secretary in the new Coalition government.

Serving for 6 years (until her accession as Prime Minister in 2016), May became the longest-serving Home Secretary for over 60 years. During her tenure she pursued reform of the Police federation, a hard-line drugs policy and brought in additional restrictions on immigration. She introduced the Modern Slavery Act in 2015.

May studied geography at the all-female St. Hugh’s College, Oxford.

After graduating in 1977, May previously worked at the Bank of England, and at the Association for Payment Clearing Services (APACS). She also served as a local government councillor for Durnsford in Merton.

May was born on 1st October 1956 to Hubert Brasier, an Anglican vicar, and his wife Zaidee in Eastbourne, Sussex.

May met her future husband, Philip, then-president of the Oxford Union, while they both studied at Oxford University. The couple do not have children.

May is frequently posited as a fashion conscious politician. As PM, May sparked a PR disaster known as ‘Trousergate’ for wearing a £995 pair of designer trousers. Former education secretary Nicky Morgan commented: ‘I don’t think I’ve ever spent that much on anything apart from my wedding dress’. The media also frequently commented on May’s varied shoe selection.

A fan of Switzerland

Theresa and Philip May regularly visit Switzerland. They regularly take a summer holiday in the car free Swiss mountain resort of Zermatt where they engage in mountain walks in the Trift Valley and underneath the Matterhorn.

A love of cricket

Theresa May is a big fan of cricket, and regularly attends matches. In the honours lists that came out during her time as Prime Minister, a number of leading cricketers received knighthoods, including Andrew Straus, Alistair Cook, and Geoffrey Boycott.