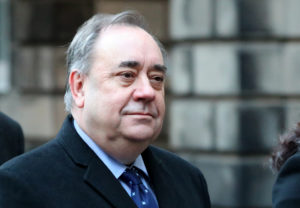 Alex Salmond still maintains his own powerbase within the SNP.

Alex Salmond has been a mainstay of Scottish politics for the best part of 35 years.  Through his many roles, Salmond masterminded the Scottish National Party’s gradual dominance of Scottish politics. Salmond joined the SNP as a 20-year-old in 1974. Five years later, at the 1979 General Election, the SNP returned only 2 seats. Twenty five years later, with Salmond in charge, the SNP would go on to win successive elections at Holyrood and pressure the UK government into allowing a 2014 ‘yes/no’ referendum on Scottish independence.

Alex Salmond began his political career as a spokesperson for the 79 Group, a Republican faction in the SNP aspiring towards an independent Scottish Socialist Republic. Far too extreme for the SNP of the 1980s, Salmond and his ’79 Group’ comrades were expelled from the national party. But Salmond quickly returned to the fold, and even won the seat of Banff and Buchan in the 1987 General Election for the SNP.

In 1990, with Salmond increasingly noted as an electoral asset among working-class voters, he decided to stand for the party leadership and won. Throughout the 1990s, Salmond constructed the SNP in his image; he created a modern, social democratic, nationalist party. Salmond stood down as SNP leader in 2000 following fall-outs with other party figures, but he would eventually take over again in 2004, with Nicola Sturgeon as his Deputy.

The Salmond led SNP powered to victory in the 2007 Holyrood Election. In this election, Salmond stood for the Scottish Parliamentary seat of Gordon, believed to be only the 18th most-winnable seat for the party. Salmond won with a margin of 6 percentage points. As the Leader of the largest party at Holyrood, Salmond became Scotland’s First Minister, ending eight years of Labour rule. For this, he won the Spectator’s Parliamentarian of the Year award.

Salmond’s profile was cemented Britain-wide with the 2014 Scottish independence referendum. To this day, Scottish independence remains Salmond’s life goal and in 2014, he came close to clinching it. Like Salmond’s previous political efforts, the campaign centred around himself and he was said to have dominated Alistair Darling of the Unionist side in the 2014 ‘Scotland Decides’ debate. However, following the 55% ‘No’ result in the referendum, Salmond resigned as Scottish First minister. His long assumed heir apparent, Nicola Sturgeon, took his place.

In 1990, Sturgeon met her mentor, Alex Salmond, during his campaign for the party leadership of that year. Salmond describing Sturgeon at that time said, ‘she was a precocious teenage prodigy as part of my campaign, bubbling with vitality and talent’. Sturgeon herself has said that Salmond ‘believed in me, long before I believed in myself’.  Sturgeon’s husband, Mr Murrell (himself later SNP Chief Executive), also previously worked in Salmond’s constituency office.

In 2019, Alex Salmond was arrested and charged with sexual assault and attempted rape for allegations that were said to have occurred during his time serving as Scotland’s First Minster. In March 2020, Salmond was acquitted of all charges at trial.

Mr Salmond himself resigned from the SNP in 2018.  In the wake of this scandal the Sturgeon-Salmond duopoly that had dominated Scottish politics for a decade, ended. This eventually manifested itself in the controversial Holyrood inquiry (the Salmond inquiry) overseen by a Scottish Parliament committee. It has been reported that the Sturgeon and Salmond haven’t spoken since 2018.

In 2020, as the public fallout from the Salmond inquiry started to rise, Salmond hinted at a return to front line politics. He published a ‘Joint Action Plan’ with MSP Alex Neil over how the SNP should ‘tackle Scotland’s post-COVID unemployment crisis’. Among Salmond’s recommendations included the demand to set up a National Housebuilding Company to build 10,000 new homes.

As a leading member of the ‘79 group from 1979-1982, Salmond marked himself out as on the left of the SNP. In 1982, Salmond gave a speech to the SNP conference arguing that to ditch the general disobedience ‘Scottish resistance’ policy (adopted in 1981) would encourage ‘a defeatist and cringing mentality’.

Later that month, Mr Salmond wrote to The Scotsman, that, ‘Only a party willing to call for civil disobedience, primarily through rganized labour, will be able to effectively back a democratic Scottish majority for a parliament’.  Because of this radicalism, Salmond was expelled by the SNP in 1982.

Alex attended Linlithgow Academy before studying at St Andrew’s University, where he graduated with a joint honours MA in Economics and History.

Salmond is known for living a very private private-life. In 1981, he became married to Moira Salmond, the daughter of an auto mechanic who is 17-years older than him. The couple have no children, and live in Strichen in Aberdeenshire.

Things you may not know

Salmond joined the SNP after a row with his then girlfriend

In an argument about Labour’s commitment to Scotland in 1973, Salmond’s then-girlfriend reportedly shouted, ‘If you feel like that, go join the bloody SNP!’. Salmond took his girlfriend’s advice.

Salmond is known to enjoy horse racing and in the past has even appeared as a pundit on Channel 4’s ‘The Morning Line’ programme. He also enjoys golf, and supports Heart of Midlothian.

Banned from the Commons for a week

In 1988 he was issued with a week-long Commons ban after interrupting the Chancellor’s Budget speech in protest at the introduction of the poll tax in Scotland.