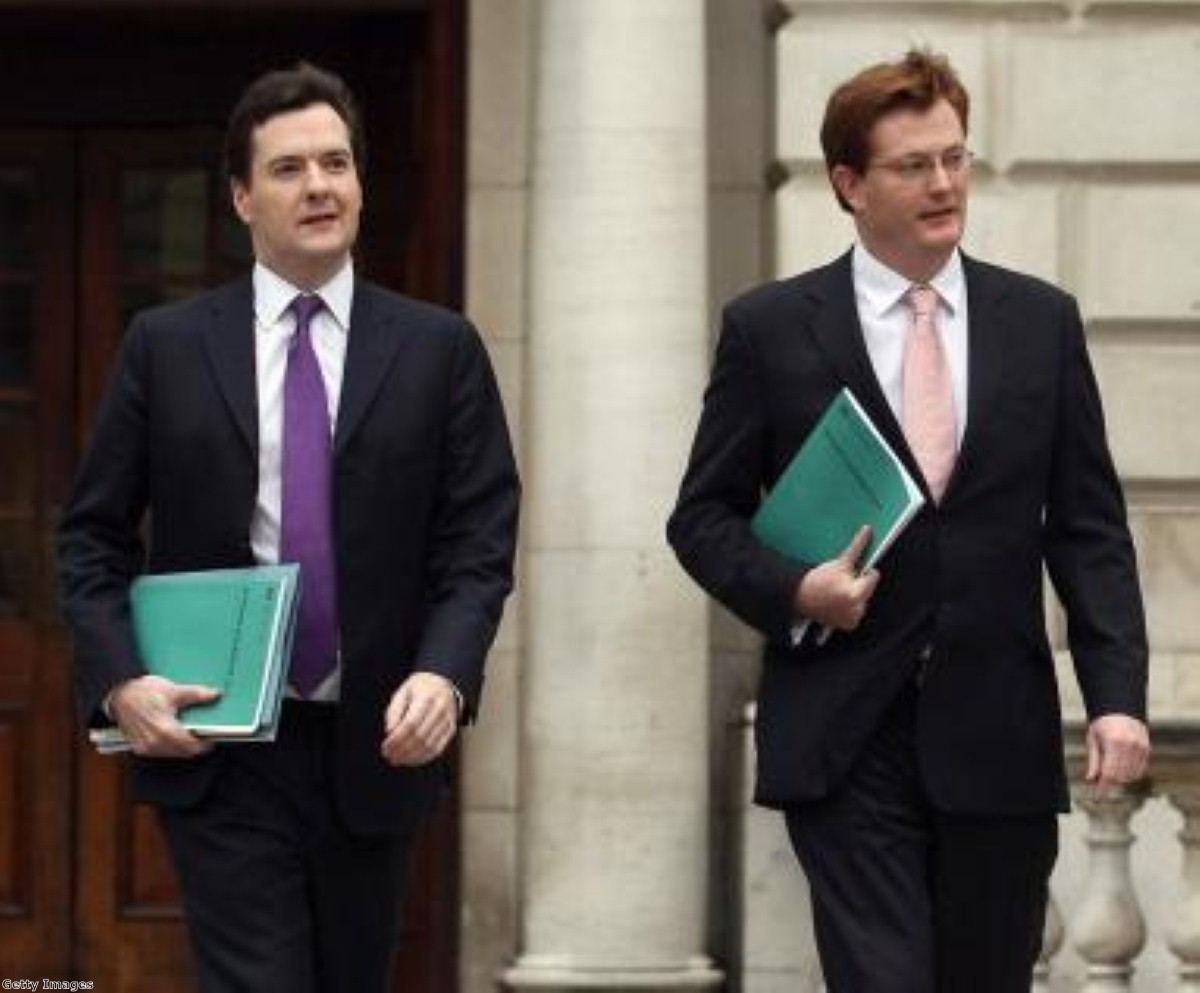 Autumn statement sketch: Not much to laugh about

Amid all the numbers, each more depressing than the last, and amid 45 minutes of positive government steps to boost the economy, there came a key shift in the government's rhetoric. The first hint that the hunted animal is wounded, flagging, beginning to lose its pace.

"Recession," the chancellor said, in only the second sentence of this year's autumn statement. This is not a word which government ministers use unless they absolutely have to. Which is why we should be so worried that it was used by Osborne today.

The Commons had barely settled themselves when it happened. They might not even have grasped its significance, as the first reference (there were three) was about the recession faced by "much of Europe" rather than Britain by itself. But it mattered. It really mattered, to you and me and everyone else in the country.

The second time Osborne mentioned a recession came after the end of his opening preamble. He pitched it as a positive: "The central forecast we publish today from the independent Office for Budget Responsibility does not predict a recession here in Britain." "Ah!" Conservative MPs observed, optimistically. Good news! Osborne was not finished, though. "But," he continued after a pause, "they have, unsurprisingly, revised down their short term growth prospects…"

"Ahhhh!" the Labour backbenches responded cheerfully. They looked as if they had always had a hunch the economy was stuffed, and were taking a perverse pleasure in being proved right about it. This was the start of a lively to-and-fro from backbenchers, who enjoy nothing more than a good dose of economic misery. Calamity gets the political juices flowing like nothing else. It was typical of the narrow partisanship on show in the Commons this lunchtime.

"Revised down their short-term growth prospects" – that's one way of putting it. I prefer 'slashed'. Osborne told MPs the UK economy will grow by just 0.7% in 2012, down from the 2.5% predicted as recently as this March. It is a devastating downgrade. It is a bleak, bleak prognosis. But there was more to come.

Osborne's third mention of the R-word was the most ominous: that "if the rest of Europe heads into recession, it may prove hard to avoid one here in the UK". Again, the qualified phrasework obscured the real meaning. This was a subtle warning that a recession is now an acknowledged possibility – a very gloomy shift in government rhetoric.

Yet that is what happened today. It just goes to show there is a very real risk that it will happen. A double-dip has been the worst-case scenario for some time. It is now much nearer than it was a year ago. Dealing with the debt is "not happening as quickly as we had wished", the chancellor conceded. He had planned to meet his target one year early; after just 18 months, "that headroom has now disappeared".

Nervous gulps all round.

Could Labour capitalise on this miserable outlook? Ed Balls is always ready to have a swing at the nearest moving target, but was shouted down within seconds of beginning his speech. When Tory backbenchers, who despise him with a vitriol usually reserved for their party leader, did let him speak he laid into "the truly colossal failure of the chancellor's plan". He did not do much to improve his popularity. Britain's economic growth was even lower than Japan's, he noted, before adding, high-pitched: "And they had an earthquake, Mr Speaker!"

What a contrast from Sunday morning, when Balls and Osborne had cosied up
on a TV studio sofa. Now they were gunning for each other. Balls insisted it was Osborne's fault, not the snow, or the royal wedding's, or that earthquake's. "It is his reckless gamble that he made things worse," he hissed.

Balls has met his match in Osborne, who – although less obviously pugnacious – is a dab hand at the snide put-down. He called Balls a "permanent advertisement" for Labour's failures. The shadow chancellor looked a little stunned.

If Labour's frontbenchers had not made much of an impact, the backbenchers did their best. During Osborne's statement they yelled "disgrace!" at public sector pay. They laughed uproariously at the chancellor's piercing analysis of the unemployment problem – "the problem is partly a lack of jobs". But its large north-east contingent let the side down by cheering when Osborne announced good news for the region, prompting approving cheers from the Tories opposite. Having realised their error they looked suitably abashed. Osborne merely paused, smiling slightly to himself, before moving on.

Somehow, the parliamentary to-and-fro seemed even less relevant than usual to the problems faced by those outside the Westminster bubble.

"We are going to see Britain through the debt storm," Osborne intoned. But as he had already acknowledged, that storm could now involve a return to the R-word. There really wasn't much to be cheerful about in the Commons today.