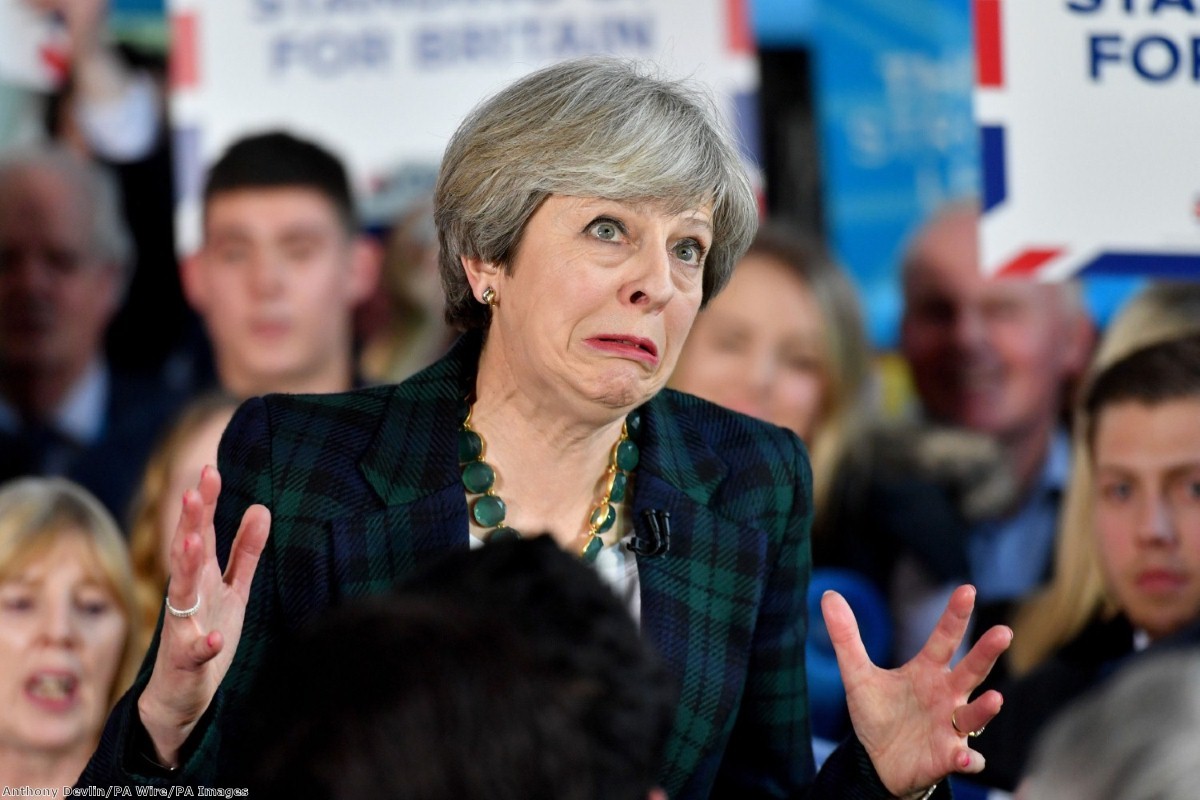 Week in Review: Do you want the blue pill or the dead pill?

If anything, the first full week of this general election campaign has actually been worse than expected.

Even though the polls are showing that the only question in this election is how high Theresa May's majority will go, the Conservatives are desperate to portray this as an actual contest between two potential prime ministers.

So much so, that the FT reports Tory spin doctors complaining to the BBC that they aren't giving Jeremy Corbyn enough coverage.

So toxic is the Labour leader's image with the British public that the Conservatives are desperate for voters to see and hear as much of him as possible. Theresa May is Tory leader, but Corbyn is their sales pitch.

May herself is roundly mocked by journalists for repeating the words "strong and stable government" on loop, but those same journalists ought to reflect on why it has got to this – the fact they will jump on the slightest departure from "the message" is why political leaders will not engage in such departures.

Speaking of twaddle, the latest gushing wave came yesterday, with May warning – or whining – that the remaining 27 EU members were "lining up to oppose" Britain in Brexit talks. Who'd have thought it – a membership organisation defending the interests of its members? But if there's one growth industry in Britain, it's a national sense of victimhood.

It takes a leader as abject as Corbyn to make the Conservatives this popular. One frustration for Corbynites is that their relatively popular policy announcements – most of which come from the Ed Miliband handbook rather than any far left doctrine – are failing to cut through with the public.

This is because the left misunderstands how voters see policies. It's not that they ignore them, but that they recognise them as an act of salesmanship. Politicians are selling a product to voters – and politicians themselves are the salesmen. Corbyn is a terrible salesman – who could believe the pitch of a man who says he is against renewing Trident while insisting his party's policy is to support it?

May, by contrast, is pushing a Maggie Thatcher tribute act to an electorate dreaming of the real thing. Strong and stable government – a pitch that only works because seven years of Conservative government have left the public craving strength and stability. Vote Tory to clean up the Tories' mess. The fact that Brexit is now biting the economy, with economic growth halving since the last quarter of 2016, is neither here nor there. Hand over your money and May will give you a top of the range Tory majority that will make it all better.

And it shouldn't be a surprise. May is calm. She is composed. She is unflappable. She hasn't dreamt up her policies on the playing fields of Eton. The government's failure to get close to its immigration targets was blamed on David Cameron and the EU rather than May as Home Secretary. The right wing press simply ignored what disasters did occur on her watch. In a country sick of political slickness, she "does sincerity well". Just as she could sell ice to the Inuit, she can sell the Conservatives to a conservative country damaged by Conservatism.

May is driving her legions deep into Labour territory. The praetorian guard is outnumbered and unarmed. A choice between a 100 seat and 200 seat Tory majority is presented as a pick of two prime ministers. Do you want strong and stable Conservative government or a Labour-led coalition of chaos? Do you want the blue pill or the dead pill?