Born in 1977 in County Tyrone near the republican stronghold of Coalisland, Michelle O’Neill grew up in a very political family.

O’Neill’s first experience in politics herself was Dungannon Councillor in South Tyrone (2005-2010). In 2010 she became the area’s first female Mayor. O’Neill was elected to the Northern Ireland Assembly in 2007 for Mid Ulster, having worked as an advisor to MLA Francie Molloy in the years prior. 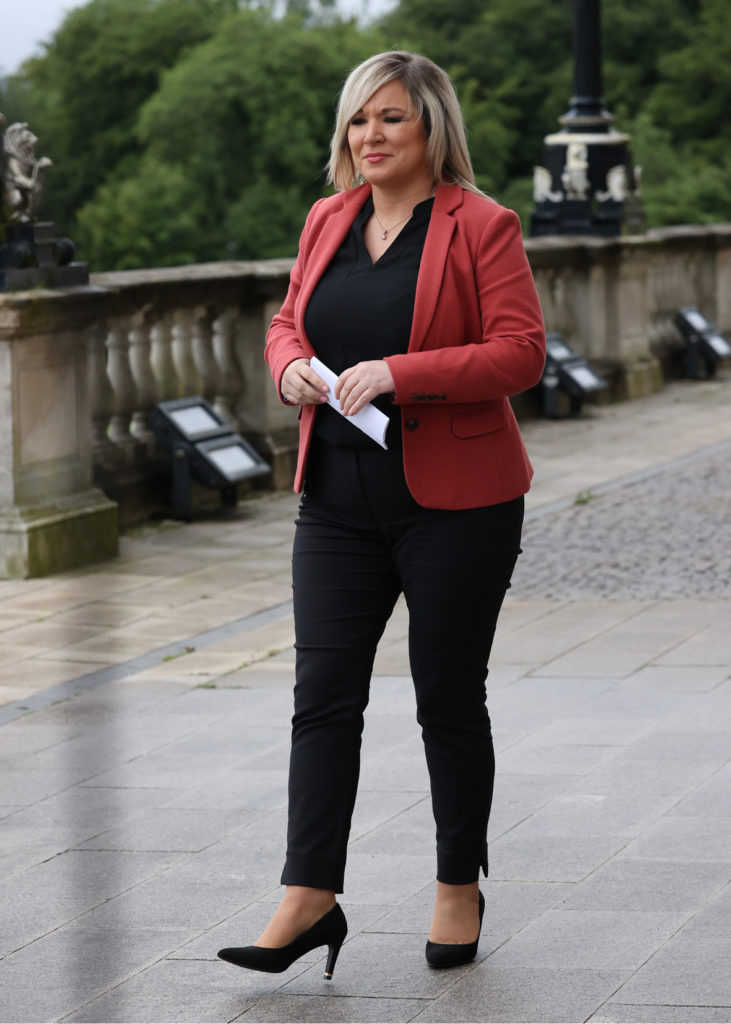 Sinn Fein’s Michelle O’Neill is the leader of Sinn Fein in Northern Ireland.

Following the announcement, O’Neill said ‘To lead our party in the North is truly the biggest honour and privilege of my life. I feel a huge amount of responsibility on my shoulders… I will not let you down’.

O’Neill’s appointment was a very symbolic moment for Sinn Féin and Irish politics. Only 40 years old at the time, O’Neill became the first leader of Sinn Féin in Northern Ireland not to have an IRA past.

However, O’Neill does come from a strong Republican background. Her father was a provisional IRA prisoner who served sentences for IRA offences during the ‘Troubles’, and her uncle, Tony Doris, was one of three IRA members shot dead by British special forces in 1991.

As Deputy First Minister, O’Neill played a key role in the Northern Ireland Executive’s response to the pandemic. As a former Northern Irish Health Minister (2016-2017) she was said to appear knowledgeable at press briefings.

Upon the collapse of the Northern Ireland Executive in February 2022, following the resignation of the DUP first minister, Michelle O’Neill again ceased to be Deputy First Minister.

Michelle O’Neill is commonly associated with the socialist left-wing of Sinn Féin and she has fought for social and economic equality in all of her past roles.

While Agriculture Minister (2011-2016), O’Neill won praise for efforts to boost rural development, and she was also lauded for lifting the lifetime ban on gay men donating blood as Health Minister.

In her biography page listed on Sinn Fein’s website, O’Neill is described as ‘A formidable campaigner [championing] issues of equality, autism, disability, mental health and the rights of rural dwellers’.

Sinn Fein’s Michelle O’Neill was a vocal opponent of Brexit, saying in one interview, ‘I think Brexit is catastrophic for the island of Ireland’. She maintained it ‘undermined’ the Good Friday Agreement of 1998 – the accord that ended three decades of conflict in Northern Ireland.

However, O’Neill also sees Brexit as creating the possibility of a United Ireland.  In 2017, O’Neill predicted that Brexit would lead to united Ireland in 10 years. O’Neill has also said claimed that the Coronavirus pandemic makes a united Ireland more likely.

In February 2022, Michelle O’Neill, told Sky News that nationalists “are closer than we ever have been [to a united Ireland] and I think now is the time to plan”.