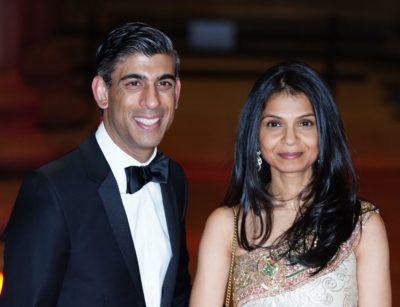 A minister has attempted to downplay the question of public outrage regarding revelations about the tax status of the chancellor and his family.

Yesterday evening the chancellor wrote to Boris Johnson to request an independent review by  Lord Geidt of his complete formal statements on his finances since joining the Cabinet in 2018.

The letter comes after  a flurry of revelations about his family tax and residency affairs over the past week, including the non-domicile status of his wife Ashkata Murty, concerns over his investments, and the admission that both himself and Murty held US green cards.

When repeatedly quizzed by Sky News’ Breakfast programme over whether he understood potential public frustration over the reports, environment secretary George Eustice avoided such an admission, claiming that Sunak has been “very candid” about the issue.

“Well look, Rishi Sunak and his wife have spoken for themselves on this,” he said, going on: “I am not his accountant, I am not responsible obviously for his tax affairs or those indeed of his wife.”

“He is very clear that he has declared everything that should have been declared at the right time and there is a process here that you have as a minister.

“You declare all your interests to the permanent secretary in your department and the Cabinet Office decide which bits should be made public, which bits they should be aware of.
There is a duty of candour in both directions and Rishi is very clear that he has been very candid about his own arrangements at every stage.”

Eustice argued that the public should “judge the chancellor”, explaining: “The man who is chancellor at the moment has paid all of his taxes and paid taxes on his income and declared all of that in the UK.

While a YouGov poll released earlier this week showed the chancellor’s overall favourability down by 24 points since before his spring statement, this polling was completed prior to the reports on his wife’s tax affairs.

“He has been clear about that. Of course there is a pressure on cost of living at the moment, we all recognise that. We all recognise that there are some difficult decisions coming down the tracks when it comes to tax to help get the NHS back on track.

“But we are also doing all that we can to help people through these difficult times.”